Following strong operating results during the height of the pandemic in calendar 2020, top video game stocks have cooled off this year. While the Dow Jones Industrial Average has returned 11.1% year to date, the stock prices of Activision Blizzard (ATVI 0.76%) and Take-Two Interactive (TTWO 2.22%) have dropped 16.9% and 24.4%, respectively.

Electronic Arts (EA 0.50%), however, has been a standout among its video game peers. EA share prices are down just 0.3% year to date at the time of writing. That small loss would be completely wiped out when you factor in EA's quarterly dividend. 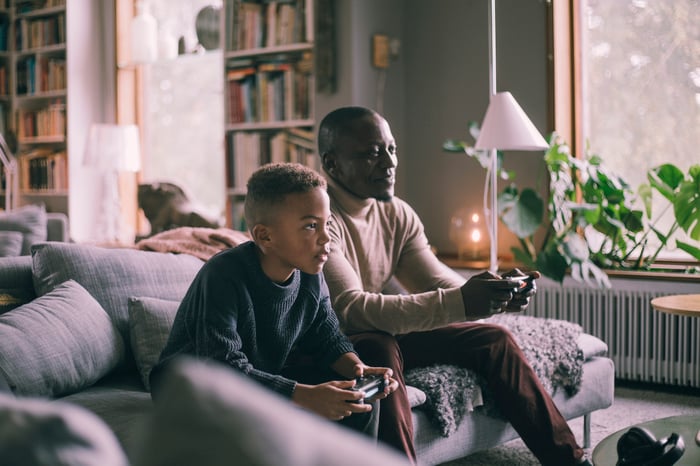 There are at least a few reasons that explain why investors favor EA right now. While EA has made several acquisitions this year that position it well for growth, I believe investors might be focusing on the company's relatively high percentage of bookings that come from in-game spending.

How EA's business compares to Activision and Take-Two

One thing EA does better than the other top game companies is generate recurring revenue. EA has a diversified portfolio of sports titles, where new versions are released every year with new roster updates and other features. The biggest sellers under the EA Sports label are Madden and FIFA. Other notable sports titles that EA publishes are NHL 22, UFC 4, PGA Tour, and F1 2021, following its acquisition of Codemasters earlier this year.

There were 140 million players that engaged with an EA Sports title over the last year. A portion of these players will spend $70 to buy the new version of one these EA Sports titles every year, providing EA a reliable stream of revenue.

Across all of EA's titles, including non-sports, EA's live services bookings (a non-GAAP measure of revenue) represented 74% of total bookings in fiscal 2021. The year-round operating model that the industry has been shifting to, where players can unlock new content with in-game purchases, has provided a lucrative recurring revenue stream for all the top game makers.

Take-Two is known for its highly acclaimed Grand Theft Auto and Red Dead Redemption franchises, but these titles don't come out with new versions every year. Players are lucky to see a version of Grand Theft Auto within a five-year span of the previous release. However, Take-Two does put out annual versions of its best-selling NBA 2K series, in addition to regularly updating its WWE and PGA Tour franchises. Across all of its games, Take-Two's in-game spending (or recurrent consumer spending) accounted for 65% of bookings in fiscal 2021.

Activision Blizzard doesn't make sports titles, but it does release annual versions of Call of Duty that drive a significant amount of revenue for the company. It disclosed in December that the Call of Duty franchise generated a total of $3 billion in bookings over the prior 12-month period. That represented 35% of its total bookings in 2020 and can be considered a recurring revenue stream given that Activision releases a new premium version of Call of Duty on consoles and PC every year, in addition to generating in-game revenue from the free-to-play versions, Call of Duty: Warzone and Call of Duty: Mobile.

Across all of Activision Blizzard's games, in-game spending represented only 57% of its total bookings in 2020. However, this percentage registered at 66% through the first half of 2021.

Overall, EA is well ahead of its peers in securing reliable revenue from annual releases, which helps lower its risk level.

With a high percentage of revenue coming from digital sources, EA is capable of producing robust free cash flow that it can reinvest. It generated $1.8 billion of free cash flow last year on top of $6.1 billion in bookings.

Investors tend to reward companies that can allocate their excess cash to new growth opportunities. EA was very active in deal-making this year. It completed the acquisitions of Glu Mobile, Codemasters, Playdemic from AT&T's Warner Bros. Games unit, and Metalhead Software. These acquisitions are expected to boost EA's top-line growth in fiscal 2022 to 22.4%, while Activision is forecast to post 4.7% growth and Take-Two is expected to report a small decline of 4.3% in bookings.

What's more, EA is doubling down on the growth of sports video games with several new games in the works, which should further bolster its live services business.

EA is not the cheapest video game stock, and because of that it may not outperform its peers over the long term, but with a quarterly dividend and a high rate of reliable revenue coming from a large portfolio of annual sports releases, it might be the safest gaming stock to own.

Should You Buy Electronic Arts Stock?
376%