A new study shows it is highly effective in preventing deaths if taken early.

Shares of Gilead Sciences (GILD -1.68%) are up a modest 8% over the past year, while the S&P 500 has risen by 29% and COVID-19 vaccine maker Moderna (MRNA -3.98%) has soared 385%. Stocks of companies treating COVID haven't been as popular as shares of vaccine makers, since the focus has been on getting as many individuals vaccinated as possible, and the government has put in orders for millions of doses.

But COVID still isn't going away, and that could make Gilead an underrated healthcare stock to buy right now. Its antiviral drug remdesivir is currently approved for use in hospitals to treat the disease, and it could play a much bigger role in the future, as a recent study suggests that it could be effective if used early on. 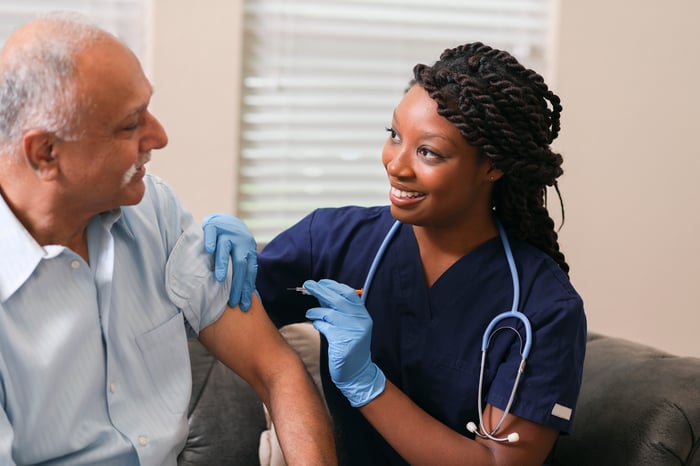 Remdesivir is FDA approved, but not everyone is convinced of its efficacy

In the early days of the pandemic, Gilead Sciences looked like a promising buy, and there was hope that remdesivir could help treat COVID. In February 2020, Bruce Aylward, the World Health Organization (WHO) assistant director-general, said, "There is only one drug right now that we think may have real efficacy, and that's remdesivir."

Much has changed since then. Conflicting studies and a lack of definitive proof of its efficacy led the WHO to advise doctors not to provide the treatment, saying in November 2020 that, "remdesivir has no meaningful effect on mortality or on other important outcomes for patients."

In April 2020, the National Institute of Allergy and Infectious Diseases released the results of a clinical trial involving 1,063 patients that showed that the use of remdesivir in people with advanced COVID-19 accelerated the median recovery time by four days (when compared to a placebo). The mortality rate of 8% was also lower than the placebo group of 11.6%. Although the drug did show effectiveness against COVID-19, it wasn't the silver bullet the WHO was hoping for.

Nonetheless, the U.S. Food and Drug Administration (FDA) granted full approval to the drug in October 2020 for all COVID patients requiring hospitalization who are at least 12 years old. Emergency Use Authorization (EUA) remains in effect for the entire population that has either suspected or laboratory confirmed COVID-19 (this includes all hospitalized patients, even those under the age of 12 -- as long as they weigh at least 3.5 kg).

In the company's second-quarter results (for the period ending June 30), sales from remdesivir, marketed under the name Veklury, totaled $829 million. On a year-to-date basis, sales were just under $2.3 billion, accounting for over 18% of Gilead's total revenue.

Is the treatment being used too late?

On Sept. 22, Gilead released the results of a new study that it says showed that the drug "significantly reduced risk of hospitalization in high-risk patients with COVID-19." In a three-day treatment course of non-hospitalized patients, it demonstrated an 87% reduction in risk, which included hospitalization or death. It's too early to tell if this will lead to a new or revised EUA, but Gilead says that it "is in the process of sharing the data with regulatory agencies."

For investors, this offers some renewed hope that remdesivir could still be useful in fighting COVID. In a study last year (for which results were released in June 2020 and are separate from the other trials noted above) of hospitalized patients with moderate COVID, it was again the shorter five-day treatment with remdesivir that demonstrated a clinical improvement compared to the standard of care, but the longer 10-day treatment was not as decisive and did not show a statistical significance in proving its efficacy. This could again support the notion that for more serious cases of COVID, where a longer treatment period is necessary, the drug may be less effective than in moderate cases and when the disease has not advanced to more serious stages.

Should you buy shares of Gilead Sciences?

Vaccines are helping in the fight against COVID-19 as case numbers are dropping in the U.S. but the disease is still a problem, especially in areas where vaccination rates remain low, and where COVID may end up becoming an endemic. Around the world, there's an even greater need for a viable treatment option -- in many African countries, the vaccination rate is less than 2%.

If Gilead gets a new approval from the FDA for health officials to administer the drug at an earlier stage of disease (or the WHO gives it a new vote of confidence in light of the recent trial), that could lead to better results and more widespread use of remdesivir. For this reason, I'm not sure that investors should give up on Gilead's stock just yet.

Gilead doesn't just rely on remdesivir. It has a strong HIV business that generates around $4 billion in quarterly revenue on a recurring basis, so investors aren't betting on just a COVID treatment's success. Last year, Gilead also acquired cancer company Forty Seven for $4.9 billion, which will bolster its oncology portfolio and potentially lead to more growth opportunities down the road.

Shares of Gilead are trading at a forward price-to-earnings (P/E) multiple of just nine (Pfizer (PFE -0.12%) and Moderna trade at 10 and 11 times their future profits, respectively). It also pays a generous dividend of 4.14% that's well above the S&P 500 average of 1.3%. Overall, Gilead is a relatively safe buy (its profit margin over the trailing 12 months is just under 20%), and there's the potential for remdesivir to give it a big boost if the latest study results in more widespread use of the drug. Buying the stock now could be a great move for long-term investors.

Is Gilead Sciences a Buy?