2021 may be your last chance to take advantage of this tax loophole.

Rumblings from Washington have gotten savvy retirement savers a bit worried: Will this year be the last to take advantage of the clever backdoor Roth IRA strategy? Let's look at the Roth's current legal setup and how it might change in 2022.

The Roth IRA is one of the few tax-free vehicles designed to enhance retirement for low- and middle-income earners. You can contribute up to $6,000 directly to Roth accounts in 2021 ($7,000 if you're over 50), ultimately for use in retirement after you turn 59 1/2. The beauty of the Roth IRA is that once you've contributed and invested the money, you'll never pay tax on it again -- neither when you receive earnings, nor when you withdraw the money, as long as you meet the qualifications.

But the Roth IRA comes with income limits. You can't earn more than $206,000 in 2021 and still directly contribute to a Roth IRA. As a result, higher-income earners are shut out from contributing to a Roth, and thereby excluded from enjoying a fully tax-exempt retirement-savings vehicle.

Here's where the backdoor strategy comes in. The income limits described above only apply to Roth IRAs -- anyone can contribute to a Traditional IRA. For years, some savvy people have contributed after-tax money (like the money you receive in your bank account when you get paid) to Traditional IRAs and then converted it to Roth status. If they set things up correctly, the conversion doesn't generate any tax.

Functionally, this is a way for people -- particularly high earners -- to contribute money to a Roth IRA without contributing directly to one. It's a valuable workaround for people who would otherwise be taxed on investment earnings and capital gains if the money were to be held in a taxable brokerage account.

While $6,000 a year doesn't sound like much, an annual backdoor Roth IRA strategy could lead to substantial account balances over the long run. If someone were to do this over 30 years (assuming an 8% annual return), they'd be left with over $680,000 to spend in retirement, entirely tax-free. 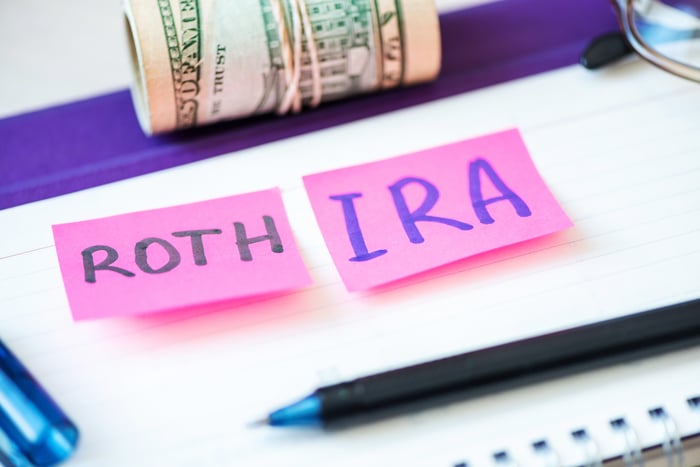 Closing the back door

Proposed legislation -- the Democrats' House Ways and Means proposal, to be exact -- stipulates that after-tax money would no longer be eligible for conversion to Roth IRAs. The big idea? The backdoor Roth IRA loophole would, at long last, be closed.

This change would also apply to "mega" backdoor Roth conversions, which involve the contribution of after-tax money to workplace plans, like 401(k)s. Not all 401(k)s allow outsized after-tax contributions to their plans, but in the ones that do, the opportunity to convert that money to Roth status would be lost.

The loss of the backdoor Roth IRA isn't inconsequential for tax-sensitive high-income individuals, and certainly will force retirement savers to look elsewhere to cover the cost of their senior years.

A good first step for those concerned about the backdoor Roth IRA ending is to ensure that you've completed it for the 2021 calendar year. In other words, you might have only a few months left to contribute to a Traditional IRA and then convert the money to a Roth. If you can swing it, contributing the full $6,000 and moving it over to a Roth before the year's up is a wise planning move.

Next, you might look to max out the rest of your tax-deferred space, like in 401(k)s and 403(b)s. Make sure you're contributing enough to take advantage of any employer match or profit-sharing contributions, which are employer-specific. If you're self-employed or do any freelance work, the Solo 401(k) may also be an option for you.

Not law yet, but be ready

There isn't any guarantee that the backdoor Roth IRA is ending, but there are some signs that it might be. Take action now to secure your backdoor Roth IRA contribution for 2021, and then wait to see how the law plays out in 2022.

We've seen legislation delayed before and certainly wouldn't be surprised to see it delayed again. But all you can do from a financial planning perspective is to follow the rules as they stand today and hope the door stays open a while longer.