A deal that would create a bank with more than $100 billion in assets has now been delayed, as the two parties await approval from the Federal Reserve.

But the deal now seems to be at some risk of not going through after the two banks said that they were extending the deadline to complete the takeover from Oct. 15 to March 1, 2022. The banks said they are still waiting for the Federal Reserve to sign off on the acquisition. This should make investors a little bit nervous. Here's why.

When First Citizens announced its agreement with CIT in October 2020, management projected the transaction to close in the first half of 2021. That clearly didn't happen, and the bank said the Fed still hadn't approved the sale during its second-quarter earnings call back on Aug. 3 -- even though the Federal Deposit Insurance Corp. and the Office of the North Carolina Commissioner of Banks have signed off  (most big banks have three regulators). 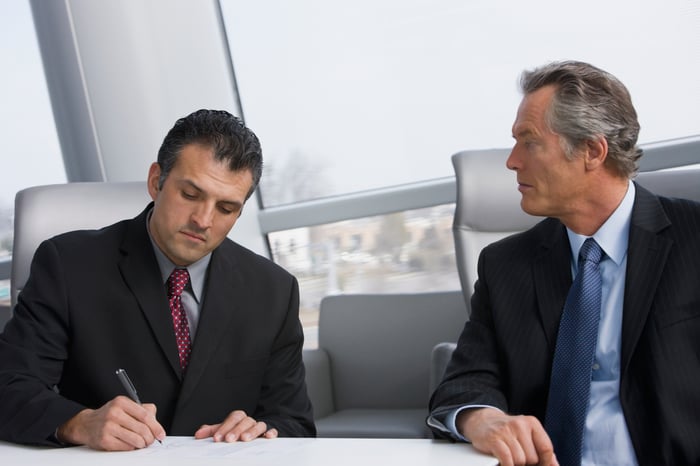 But during the second-quarter earnings call, there didn't seem to be any reason to suggest the combination wouldn't be completed, as evidenced by this exchange between an analyst and First Citizens Chief Financial Officer Craig Nix:

"So if I'm reading it correctly, just between the lines, it sounds like where the message is there's no big issue or obstacle that's stopping [the deal]," D.A. Davidson analyst Kevin Fitzsimmons said. "It's just you're in communication. It's just a matter of letting the process play out and getting legal close, correct?" Nix responded, "That's correct, Kevin."

But now, in October, the approval timeline has been extended by five months. Some analysts have speculated that the deal may have run afoul of a changing political stance at the Fed that gives less favorable treatment to large bank mergers. But that theory stands at odds with the Fed's recent approval of even larger bank deals, including PNC Financial Service Group's acquisition of BBVA's U.S. banking operations, and Huntington Bancshares' purchase of TCF.

Still, the Fed may look at this deal differently because it transforms the two banks, each with roughly $55 billion in assets, into one with more than $100 billion in assets. That will subject the new First Citizens to much heavier regulatory scrutiny, including more advanced stress testing from the Fed, which is triggered at the $100-billion-asset threshold. CIT also has a difficult past after filing for bankruptcy during the Great Recession. The bank has significantly reduced balance-sheet risk since then. But when First Citizens announced the deal, CIT still traded at a rock-bottom valuation of less than 50% of tangible book value (TBV), which is what a bank would be worth if it were liquidated. The good news, according to Christopher Marinac, an analyst at Janney Montgomery Scott, is that most bank regulators rule on acquisitions in a similar manner, so it would be odd for the Fed to deny approval after the FDIC signed off.

There still is a decent chance the deal goes through. In the recent news release about the merger agreement, First Citizens said it has answered the Fed's questions and that the application has reached the Fed's board of governors. But after two delays, it would be foolish in my opinion for investors to not be at least slightly concerned. The market hasn't reacted too much, and First Citizens' stock didn't take much of a hit on the news that the merger agreement had been extended. But the reason I'm a bit worried is that the stock trades as if the deal has been completed.

Investors love this deal because management expects the addition of CIT to boost First Citizens's TBV by 30%, and bank stocks tend to trade relative to their TBV. The acquisition is also expected to boost First Citizens' earnings per share by 50% in 2022. That seems to be reflected in the stock price, which has risen to $860. With the bank's current TBV per share at $383, First Citizens trades at a hefty 225% premium to TBV, which is a good deal higher than what the bank has traded at over the past decade. 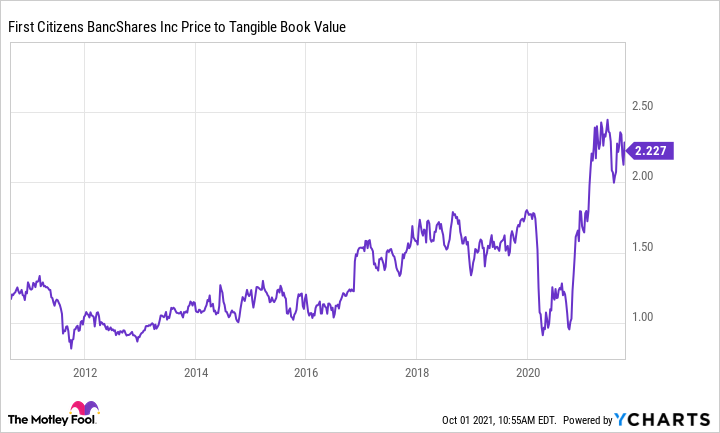 However, the bank's TBV with the addition of CIT is expected to be nearly $470. At that level, First Citizens would trade at roughly 180% to TBV, which is more in line with the average share valuation during the past year. Now, I'm not saying the acquisition of CIT couldn't propel First Citizens to a higher valuation, but if the deal doesn't happen today's share price may not hold up.

Is the merger in real jeopardy?

First Citizens' plan to acquire CIT looks like a great deal, and investors have rewarded it with a rich share price. But with the second delay in getting the deal closed, it's time to be a bit concerned that the transaction could be in jeopardy. After all, the Fed has approved deals that were larger and that were announced after this deal, so it's unclear to me why this one wouldn't have gone through at this point.