It'll likely push the revenue of vaccine victors even further.

If you're keen on protecting yourself from the coronavirus, you may soon have a choice to make about the brand of vaccine you get. Specifically, you might need to decide whether to get a second shot (or booster dose) of the same jab as you got before, or whether to go for a dose made by a different manufacturer.

With the ability to mix and match doses from different developers, it's reasonable to expect health-conscious consumers to flock to the combination that they think will keep them the safest. Mixing and matching isn't even explicitly permitted yet -- but it might be quite soon, and so there could be a shakeup in the vaccine stocks considered the winners. Let's analyze the situation to see why this issue matters for investors. 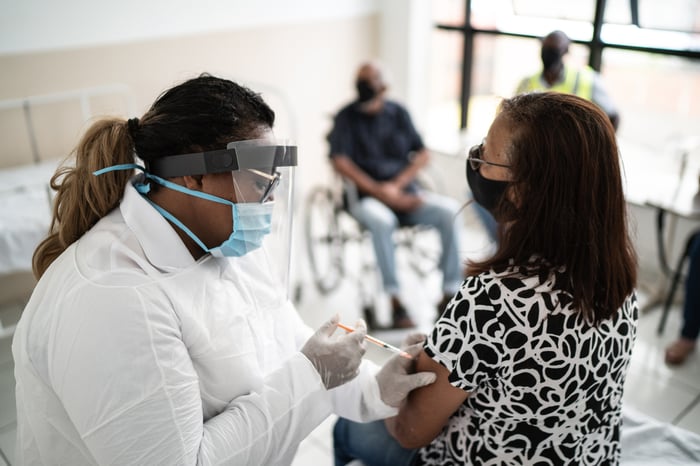 Given that the majority of the population in the U.S. is "fully vaccinated" by the vaccination standards established late last year, the biggest implications for mixed jabs will be for booster doses. Right now, the only approved regimen for booster shots is for certain vulnerable people who got two doses of Pfizer's (PFE 1.90%) jab to get a third dose.

That's inconvenient, as many people seeking boosters may have gotten the Moderna (MRNA 3.17%) or Johnson & Johnson (JNJ 0.42%) jab instead. So, there's a significant public health advantage in allowing people to get a booster with any dose that's available, which has led regulators to investigate whether it's feasible. According to the director of the Centers for Disease Control and Prevention (CDC), the agency will rule on whether a mix-and-match regimen for booster shots is recommended by the end of October.

Johnson & Johnson may be the biggest loser of the new booster dosing protocol. Its vaccine was originally conceived to be given as a single dose, but the jab's efficacy lagged behind both Moderna's and Pfizer's offerings. Even if new data suggests that the Johnson & Johnson vaccine is equally effective as the other options against preventing severe disease when given as a two-shot regimen, there's a good chance that people will prefer the Moderna or Pfizer doses for their booster.

After all, those are the pair of domestically approved jabs with the highest initially reported efficacy, and people may not be following the latest developments. So, the companies might pick up some of the new revenue from sales of boosters and effectively steal Johnson & Johnson's market share. Still, given the company's $89.19 billion in trailing revenue, it's hard to imagine losing a few vaccine sales here and there could ever impact its share price significantly.

At the same time, there isn't much risk of Pfizer or Moderna stealing from each other's share of the booster market. While there do appear to be some differences between the performance of the two shots, they likely aren't major enough to impact share prices, and both companies have avoided manufacturing issues that plagued the competition. Furthermore, the two mRNA vaccine makers have also avoided pausing their rollouts to investigate unexpected side effects -- something Johnson & Johnson was forced to do -- which has likely led to higher public confidence in their inoculations.

There is a wildcard in play for Moderna and Pfizer's mRNA shots, however. Earlier this year, some research indicated that people would be protected the most effectively if they received one dose of an mRNA vaccine and one dose of a vaccine like AstraZeneca's (AZN 0.54%), which uses a different modality to elicit immunity. If more research is published that confirms and elaborates on the initial findings in the context of boosters, it could be a blow to Pfizer and Moderna and a boon to Johnson & Johnson and AstraZeneca.

Wildcards aside, the biggest impact of mixing and matching doses will likely be for the companies whose jabs aren't yet approved in the U.S., but which will soon likely be. AstraZeneca and Novavax (NVAX 2.18%) will both be particularly vulnerable in this regard, as neither company's vaccine is being investigated by the national public health authorities for its merits as a booster.

That means their late entry into the market could be limited to people who aren't yet vaccinated, at least at first. It also means that it could take months before the CDC even starts to evaluate their products for their suitability as boosters when used as part of a two-shot series from the same manufacturer, nevermind evaluating their performance in the context of mixing and matching.

This issue isn't make or break

In closing, the takeaway for investors is that if mixing and matching is allowed, it'll likely be a modest benefit to the top lines of Moderna and Pfizer, thereby increasing their lead in the coronavirus vaccine market even further. Especially for Moderna, the additional revenue would be a welcome surprise for shareholders, who may be starting to get nervous about the stock's valuation.

Still, Moderna investors shouldn't count their eggs before they hatch. With more than a month until the verdict from regulators, there's a lot that might change.