All three of these companies could be much larger a decade from now.

The best investments historically have come from buying high-growth stocks at a reasonable valuation and holding on for a decade or longer. We all know about the past returns of stocks like Amazon, Netflix, and Apple, which have return multiples of more than 100x for investors in the past 20 years. But what about the stocks that have a chance to put up future life-changing returns? 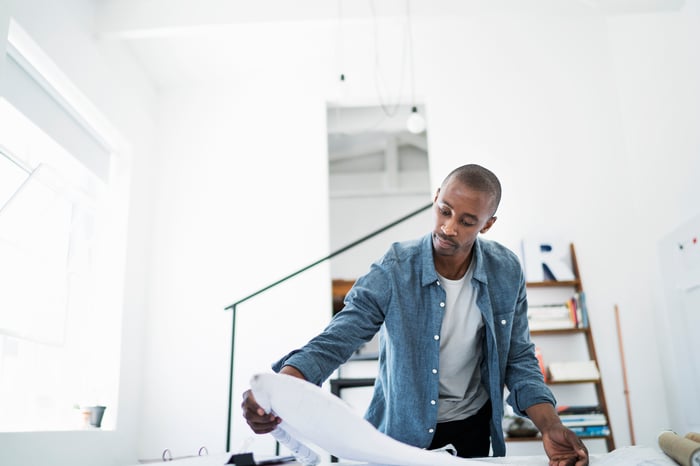 Autodesk is a decades-old software company that came to prominence in the late 1980s along with companions Adobe and Microsoft. It originally started selling 2D design software called AutoCAD but has expanded to many more products since then, either through internal releases or acquisitions. Currently, its most important product is Revit, a 3D design tool mainly used by architects to design buildings in line with Building Information Modeling (BIM) standards, which most governments are adopting around the world. Autodesk has also made a smooth transition to subscription-based products, with over 95% of revenue coming from recurring sources, which makes the business much more reliable over the business cycle.

AutoCAD and Revit were Autodesk's main growth drivers in the past two decades and are the primary reasons the company's stock has increased 300% over the past five years. The company is also expecting to generate $4.3 billion in revenue and over $1.5 billion in free cash flow for the fiscal year ending January 2022. However, over the next decade, the majority of Autodesk's growth will come from its new cloud-based products. For example, Fusion 360 is for manufacturing, mechanical, and electrical engineering design. Unlike the legacy design systems, Fusion 360 is built for the cloud and has many extensions to other software programs, making it easier for different teams and engineering disciplines to work together on projects.

At its investor day, Autodesk said that Fusion 360 now has 165,000 paid subscriptions, growing at a 53% compound annual growth rate (CAGR) over the past three years. And thanks to its extensions/upsell strategy, billings have grown much faster than subscriptions, at a 107% CAGR over the past three years. Autodesk has many other products with growth potential similar to Fusion 360, like Forge (its third-party developer platform), Autodesk Construction Cloud (construction site software), and Autodesk Tandem (digital twins which allows a builder a virtual image of their plans).

With steady business coming from AutoCAD and Revit and so many promising new products and services, Autodesk is poised to be a much larger business a decade from now, which will likely benefit shareholders.

Amazon has been a long-term stock market winner because of its dominance of e-commerce in the United States. Another company looking to do just that, but in South Korea, is Coupang. The company went public this spring through an initial public offering, raising $4.6 billion in the process.

Coupang's primary business is its e-commerce platform, which offers a wide selection of items to South Korean consumers, most of which can be delivered within a day or less. The company is able to deliver with such speed because it has its own delivery and warehouse network, with over 15,000 full-time delivery drivers. This means, unlike Amazon, Coupang is a vertically integrated e-commerce business, giving it a distinct advantage over anyone trying to compete with it in Korea.

On top of the e-commerce platform and delivery network, Coupang has launched adjacent businesses like Rocket Fresh (grocery delivery) and Coupang Eats (food delivery). All these businesses are growing rapidly, which led to a 71% increase in revenue last quarter to $4.5 billion. Active customers hit 17 million, and revenue per active customer grew 36% to $263 in the period. With the chance to keep growing within South Korea, and plans to expand to other countries like Singapore, Taiwan, and Japan, Coupang should be able to increase revenue, profits, and cash flow at a high rate for many years. Ultimately, that opportunity to strengthen financial performance would give the stock potential to be a winner over the next decade.

Unlike the two companies listed above, which have market caps in the tens of billions, Latch is a lot smaller, with a market cap of $1.7 billion. It's a hardware and software company for apartments and commercial buildings that makes money by selling smart-lock and access subscriptions to building owners. Latch customers install its smart doorknobs on the front door of each apartment and common area during construction, which allows every room to be connected to Latch's software platform. From there, building owners and managers can easily provide guests access to the rooms through Latch's mobile app, which acts as a key replacement for tenants.

Latch doesn't make much profit on its hardware sales, so the majority of its business comes from software subscriptions. Owners typically pay around $7 to $12 a month per room to Latch, depending on how many products they want. This means that a great forward-looking indicator for Latch's future growth is the number of units it has booked with customers. In the second quarter, cumulative booked units hit 451,000, up 108% year over year from 2020.

Since it might take upward of five years to complete a building, Latch only realized around $9 million in revenue last quarter, which looks tiny compared to its $1.7 billion market cap and the number of cumulative booked apartment units. But with no customer (referring to the building owners) ever-churning off of its subscription service, Latch has a clear path to rapidly grow revenue over the next decade, just from its existing homes booked. If it continues to grow the number of booked homes under management, the revenue base could be in the hundreds of millions five to 10 years from now, which would be great news for shareholders.

3 Reasons Why Coupang Is a Top Growth Stock
363%