Nvidia and Matterport stocks are poised to get tailwinds from the growth of VR.

Virtual reality seems poised to be one of the hottest technology growth trends of the next decade or two. VR, in simple terms, is the use of computer technology to create a simulated environment that gives the user a fully immersive experience. The term applies to both the tech and the environment it creates.

Global spending on VR and its cousin augmented reality will soar from just over $12 billion in 2020 to $72.8 billion in 2024, according to estimates by research firm IDC. That's a whopping 54% compound annual growth rate. Estimates vary by source, and VR and AR are usually lumped together. But the point remains that these two related technologies have powerful growth potential.

Two of the best stocks to invest in VR -- though neither is a pure play -- are gaming and tech giant Nvidia (NVDA 0.20%) and newly public spatial-data company Matterport (MTTR 2.38%). 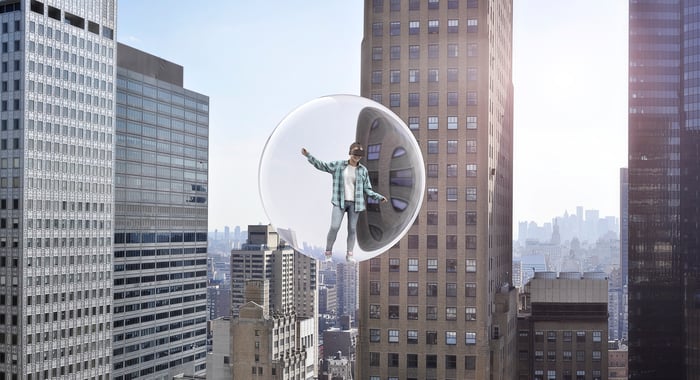 Nvidia: A leader in many high-growth technologies

Nvidia was founded in the 1990s as a maker of discrete graphics processing units for computer gaming. It's now not only the leader in the gaming GPU market, but also a major player in many fast-growing tech spaces, including cloud computing, artificial intelligence, self-driving vehicles, and -- yes -- virtual reality.

This transformation is largely thanks to founder and CEO Jensen Huang, whose business savvy seems on par with his tech brilliance. CFO Colette Kress also deserves much credit, as she's been the finance leader for eight years.

Nvidia is deeply involved in VR across its platforms. Its GeForce RTX GPUs offer gamers plug-and-play compatibility with all of the top VR headsets. Its VRWorks suite of products enables application and headset developers to create VR experiences. And, to name one more example, its Drive Constellation simulation platform -- which runs in data centers -- allows developers working on autonomous vehicles to do testing in virtual reality.

In the first half of its current fiscal year (ended Aug. 1), Nvidia's revenue surged 75% year over year to $12.2 billion. Adjusted for one-time items, net income soared 99% to $4.9 billion, or $1.95 per share. For investors, there's a lot to like about a fast-growing company churning out a fat adjusted profit margin of 40%.

Nvidia stock is already attractive as a long-term investment. It will be even more so if the company is successful in closing its pending $40 billion acquisition of Arm, a leading central processing unit chip designer.

Matterport just went public in July via a reverse merger with a special purpose acquisition company, but the Silicon Valley-based company has been in business since 2011. Its platform enables the creation of detailed 3D digital replicas -- or "digital twins" -- of buildings and other physical spaces.

The industry that's been the fastest to adopt its platform is the real estate industry, with realtors using it to provide virtual tours of properties. But the potential use cases seem immense across industries such as travel and hospitality, retail, insurance, architecture and construction, and facility management.

Matterport has been transforming itself into a subscription-focused company, with subscription revenue accounting for 52% of total revenue in the first half of 2021. This is a positive for investors because subscription businesses generate recurring revenue.

As to VR, Matterport touts that it's a leader in the tech. Indeed, its models can be imported into VR platforms to create totally immersive experiences. The company supports several major VR platforms and headsets.

Nvidia stock is the better bet for most investors since the company is well established and extremely profitable. I'd not hesitate to call it a buy.

Matterport is more speculative because it's so new to the public markets and not yet profitable. So, only those comfortable with these traits should consider investing in it now. At the very least, though, you might want to put it on your watch list and monitor its performance in the coming quarters.