But those wins probably won't be all that big.

Few diseases have wreaked as much havoc as malaria. In 2019, there were an estimated 229 million malaria cases. More than 400,000 people worldwide die from the mosquito-borne disease every year. Roughly two-thirds of those deaths are kids aged 5 or younger.

But now help is on the way. Last week, the World Health Organization (WHO) recommended widespread use of a malaria vaccine in children. WHO Director-General Tedros Adhanom Ghebreyesus called this recommendation "a historic moment." Ghebreyesus said, "The long-awaited malaria vaccine for children is a breakthrough for science, child health and malaria control."

Potentially tens of thousands of children, primarily in Africa, should benefit from this malaria vaccine. And there are also two vaccine stocks that are poised to win as well -- GlaxoSmithKline (GSK 7.34%) and Agenus (AGEN -6.65%). 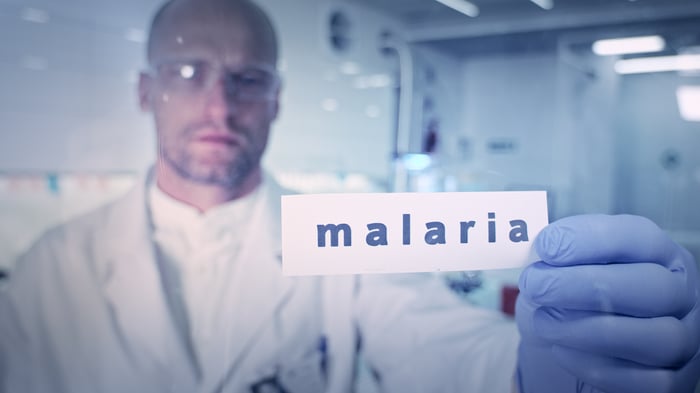 COVID-19 vaccines were developed in a stunningly short amount of time. However, GlaxoSmithKline's malaria vaccine was decades in the making.

The company teamed up with Walter Reed Army Institute of Research (WRAIR) back in 1987 to test an experimental malaria vaccine called FSV-1. Although the initial efforts weren't a rousing success, they led to the development of a descendant of FSV-1 which was dubbed RTS,S/AS01 and included Agenus' QS-21 Stimulon adjuvant.

Through the years, more than $750 million was invested in the development of this malaria vaccine. Most of those funds came from GlaxoSmithKline and the Bill and Melinda Gates Foundation.

In 2015, GlaxoSmithKline obtained a positive scientific opinion for RTS,S/AS01 from the European Medicines Agency. The big drugmaker gave the vaccine the brand name Mosquirix. In 2018, Ghana's Food and Drug Administration approved the malaria vaccine. However, the WHO waited on giving a thumbs-up until studies were completed in three pilot countries.

With the WHO's long-awaited recommendation, GlaxoSmithKline and Agenus should soon begin racking up sales of Mosquirix. However, the companies likely won't profit as much as you might think.

For one thing, GlaxoSmithKline has committed to supplying up to 15 million doses per year at no more than 5% above cost. The company has also stated in the past that it intends to reinvest those modest profits into further research on malaria and other tropical diseases.

Around 100 million doses will be required to fully vaccinate all children in countries where malaria is an especially serious problem. The non-profit group Center for Global Development estimates that the annual cost for administering malaria vaccines in the 10 countries in sub-Saharan Africa at most risk will be around $325 million.

Assuming GlaxoSmithKline pockets most of that amount, it still won't make a big impact on the company. Last year, GSK generated more than $44 billion in revenue.

What about Agenus? The biotech typically receives royalties for 10 years after the commercial launch of vaccines that use its QS-21 Stimulon adjuvant. Agenus will make significantly less from sales of Mosquirix than GlaxoSmithKline will.

While the recent WHO recommendation for Mosquirix is truly historic, this milestone likely won't translate to overly impressive financial results for either GlaxoSmithKline or Agenus. However, there are other things to like about both of these stocks.

GlaxoSmithKline could be in store for a huge year in 2022. The U.S. Food and Drug Administration (FDA) is scheduled to announce a key approval decision on cabotegravir as an HIV prophylaxis on Jan. 24, 2022. The drug is likely to be a big winner in this market. In the meantime, GSK offers a juicy dividend yield of 5.7%.