Another big step in preventing HIV and AIDS has been taken and GlaxoSmithKline is at the forefront.

Since the first report of AIDS in 1981, the scientific community has been working tirelessly to develop therapies for AIDS, as well as preventative treatments for the initial stages, HIV.

HIV specialist ViiV Healthcare is majority-owned by GlaxoSmithKline (GSK 1.27%) with Pfizer (PFE 1.90%) and Shionogi as fellow shareholders. ViiV Healthcare announced last month that the U.S. Food and Drug Administration (FDA) accepted and granted priority review for its injectable, long-acting pre-exposure prophylaxis (PrEP) drug known as cabotegravir. With the FDA targeting a decision on the drug by Jan. 24, 2022, what could this revolutionary prophylactic HIV treatment mean for GlaxoSmithKline? Let's find out by examining the appeal and the efficacy of cabotegravir, as well as the sales potential of the drug. 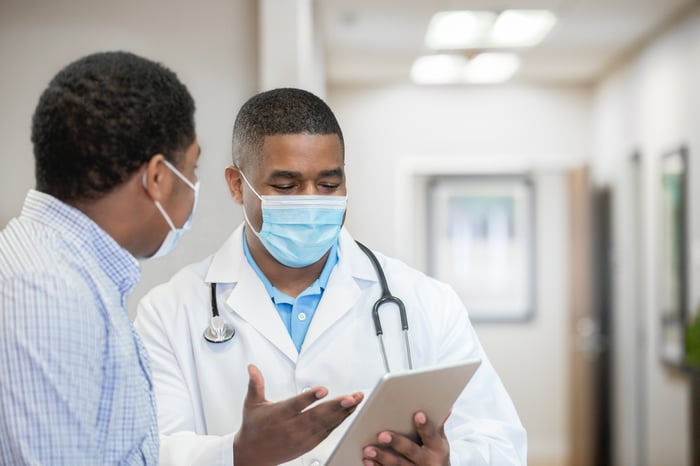 Before articulating the potential of cabotegravir, it would be important to highlight the connection between HIV and AIDS. According to HIV.gov, "HIV is a virus that attacks cells that help the body fight infection," which can put a patient at higher risk of serious infections. If HIV isn't treated, it can progress into the late stage of the infection, which is referred to as AIDS. As a person's immune system becomes significantly compromised as a result of AIDS, they are highly susceptible to other illnesses which adds to the already significant costs for healthcare.

Even with a variety of effective HIV treatments on the market to reduce the likelihood of progression to AIDS, the prevention of HIV using prophylactic treatments is a high priority since there is no cure for HIV. Drastically reducing the number of new HIV cases through prophylactic treatments is in the interest of public health because that is more time and resources freed up for the healthcare system to treat other equally serious conditions.

This is where cabotegravir could be instrumental in significantly reducing the HIV incidence rate compared to existing prophylactic options. ViiV Healthcare's phase 3 clinical trials examined the impact of an every-other-month injection of cabotegravir versus a combo of a daily oral PrEP pill and a placebo injection. Clinical results demonstrated the former was far more effective in "preventing HIV in at-risk men and transgender women who have sex with men," according to the head of research and development at ViiV Healthcare, Dr. Kimberly Smith.

In support of this assertion, only 0.41% of patients receiving the injection of cabotegravir every two months went on to test positive for HIV compared to 1.22% in the daily oral PrEP pill and placebo injection group. A 66% reduction in the incidence of HIV while only requiring six injections a year is a major breakthrough in the prevention of HIV, which is great news for at-risk patients and healthcare systems throughout the world.

So, now we know that the cabotegravir injection is a meaningful advancement in the prevention of HIV. But what does that mean for GlaxoSmithKline? With GlaxoSmithKline's blockbuster Dolutegravir HIV products ($3 billion in first-half sales) set to experience patent expirations near the end of this decade, the company needs new product launches to maintain and build upon its HIV market share.

Aside from the approval of cabotegravir earlier this year as a treatment for those already diagnosed with HIV, the drug is only three months away from an almost certain preventative HIV FDA approval based on its efficacy. GlaxoSmithKline itself is forecasting that cabotegravir will generate peak sales in excess of 2 billion pounds or about $2.3 billion at the current exchange rate. While a portion of that revenue will be derived from the treatment of active HIV with cabotegravir, the larger focus is the HIV prevention market.

Research firm Global Data estimates that the HIV PrEP market will grow from $2.6 billion in 2019 to $3.3 billion in revenue by 2029. Global Data further anticipates injectable therapies will account for the majority of the HIV PrEP market in 2029 and that cabotegravir-based therapies will dominate the market with a 79% market share, or annual sales of $1.5 billion by 2029. This makes sense given the efficacy of cabotegravir and the fact that it is positioned to be the first long-acting therapy on the market.

Pharma stock GlaxoSmithKline has a number of HIV drugs, and cabotegravir will provide a boost to an already strong HIV portfolio and the company's overall drug portfolio. As Fool.com contributor Keith Speights points out, GlaxoSmithKline also has two rapidly growing respiratory therapeutics, Nucala and Trelegy Ellipta.

But with such a high yield, investors shouldn't expect much dividend growth anyway. As a secondary position within a diversified portfolio, GlaxoSmithKline provides income investors a high yield with a tolerable amount of risk, in my opinion.