Which chumbox advertising purveyor is the better all-around investment?

Taboola (TBLA -1.89%) and Outbrain (OB -1.69%) are two of the world's top providers of chumbox ads, which are often associated with "clickbait" articles.

Chumboxes display grids of thumbnail ads with sensational headlines like "You Won't Believe What (Celebrity) Looks Like Now." They also promote less sensational articles as content from "Around the Web" or "Sponsored Links."

Taboola and Outbrain had planned for several years to merge, but those talks collapsed last year as both companies grappled with pandemic-related challenges. Both chumbox leaders then separately went public this year and in very different ways. 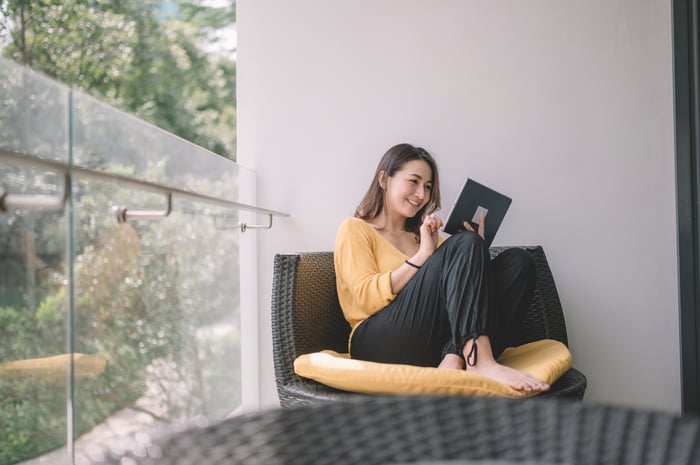 Taboola went public by merging with a special purpose acquisition company (SPAC) called ION Acquisition. Its stock started trading at $11.34 a share on June 30, above its anticipated value of $10 per share, but it's now worth less than $9. Outbrain went public via a traditional IPO on July 22 at $20 per share, well below its target range of $24 to $26, and it's only worth about $16 a share today.

Let's see why neither advertising company impressed the market, if the bearish concerns are justified, and if either stock is worth buying today.

Can chumbox ads survive as the ad market evolves?

Chumbox ads became popular over the past decade, but they could face three existential challenges over the next few years.

First, a growing number of internet users are downloading ad-blocking extensions for web browsers, which eliminate chumbox ads. Hootsuite estimates that 42.7% of all internet users between the ages of 16 and 64 currently use ad blockers.

Lastly, Apple's recent privacy changes to iOS, which enable users to opt-out of data-tracking features across all apps, could make it even tougher to craft targeted ads.

Taboola and Outbrain both cite ad-blockers, third-party cookie bans, and Apple's platform changes as major risk factors in their regulatory filings. Those long-term concerns likely overshadowed their past and current growth rates.

But how fast are Taboola and Outbrain growing?

Taboola's revenue rose 16% year over year to $632 million in the first half of 2021. Its traffic acquisition costs (TAC) increased just 8%, and those tighter cost controls boosted its gross margin from 25% to 30%. Its gross profit, on an ex-TAC (excluding traffic acquisition costs) basis, grew 33% to $222.8 million as its adjusted EBITDA surged 124% to $74.3 million.

Analysts expect Taboola's revenue to rise 15% this year with a narrower net loss, followed by 25% revenue growth next year with a net profit. Those are impressive growth rates for a stock that trades at less than one times this year's sales.

Outbrain's revenue rose 42% year over year to $475.2 million in the first half of 2021. Its TAC increased 36% during that period, which also trailed its revenue growth, and its gross margin expanded from 19.3% to 23.7%. Its adjusted EBITDA rose more than six times to $45.2 million and it turned profitable on a GAAP basis.

For the full year, Outbrain expects its ex-TAC gross profit to increase 37%-39% and for its adjusted EBITDA to grow 96%-101%. Unlike Taboola, it didn't provide any exact guidance for fiscal 2022.

Analysts expect Outbrain's revenue to rise 30% this year with a net profit. Next year, they expect its revenue and earnings to increase 22% and 30%, respectively -- which are also impressive growth rates for a stock that trades at just 19 times forward earnings and less than one times this year's sales.

Both companies face customer concentration issues. Taboola generated roughly a fifth of its revenue from Microsoft and its affiliates last year, while Outbrain's two largest media partners each generated about 10% of Outbrain's revenue over the past two years.

Taboola and Outbrain are fundamentally similar, and their stocks are both trading at depressed valuations. But Outbrain's stronger growth, stabilizing profits, and lower customer concentration all make it a better all-around investment than Taboola.

If you believe ad blockers, third-party cookie bans, and platform changes will crush chumbox ads, don't buy either stock right now. But if you believe Taboola and Outbrain can overcome those near-term challenges by changing their algorithms and rolling out new ad formats, buy the latter instead of the former.