Disney and Netflix have very different streaming strategies, but Disney has far more potential for growth.

Walt Disney (DIS 0.43%) and Netflix (NFLX 0.60%) are fairly similar in stock market size with Disney valued at $321 billion and Netflix at $280 billion, and there are a lot more similarities between the two given their enormous streaming businesses. But there are a number of major differences too that investors need to weigh.

One major difference is that Disney is a lot more than a streaming company. It has linear TV channels, theme parks, and a huge merchandising business. It's not only the depth of Disney's business that makes me like the stock, but also its commitment to building content that will keep users coming back again and again, which makes me think Disney will be a better stock than Netflix long-term. 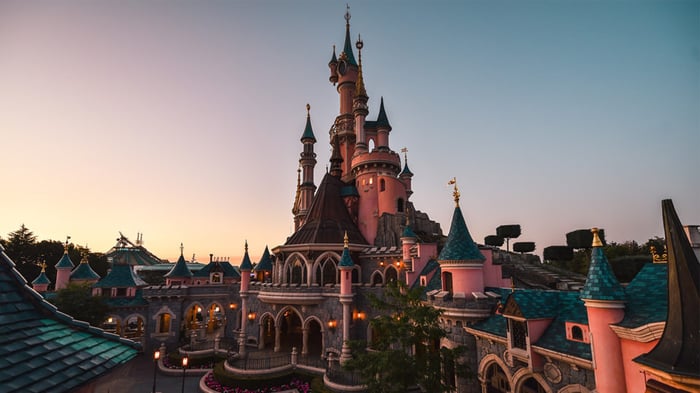 Recently, Stratechery analyst Ben Thompson described the two companies' streaming strategies as franchise building (Disney) and dice throwing (Netflix). The recent hit Squid Game is an example of the dice hitting perfectly for Netflix, but it's hard for the company to know what piece of content is going to resonate with customers.

One modification I would make to this comparison is that Disney is really in the business of world-building. The Marvel Cinematic Universe, or MCU, has "universe" right there in the name, and Star Wars is literally about an ongoing battle for the future of a galaxy. The company is building and expanding these worlds with long-arc stories and characters that have been popular for decades. Over time, Disney can keep building these worlds while Netflix keeps rolling the dice and hoping to hit it big with a piece of content.

Another way to think about it is that Disney is a premium-content provider that wants to build a long-term relationship with viewers while Netflix wants to have enough content to have something fresh for everyone all the time. Both can be successful, but the models are different.

Disney's world-building model folds well into the rest of its business. The company's parks and experiences business was responsible for about one-third of revenue pre-pandemic and it's a major profit driver for the company. When stories like Wanda Vision and Loki are added to the MCU or the Mandalorian is released on Disney+, they can also be folded into parks and merchandising.

It's these ancillary businesses that I think give Disney far more upside than Netflix. For Netflix to grow, it has to add subscribers or raise prices; those are the two main levers it has to expand the business. In contrast, Disney can grow subscribers and raise prices -- and it can also expand its theme parks, add merchandise, build a cruise ship, or grow any number of other businesses under its umbrella. The business model works because Disney is building worlds.

On the pricing side, Netflix is also in the lead for now, generating $14.54 in average monthly revenue per subscriber in the U.S. and Canada; $11.66 in Europe, the Middle East, and Asia; $7.50 in Latin America; and $9.74 in the Asia Pacific. Meanwhile, Disney+ generates just $4.16 per subscriber. However, I think there's far more ability for Disney to raise prices than there is for Netflix, particularly as the flood of new content it announced last year starts hitting the service.

If Disney's subscriber growth continues, it could have more subscribers worldwide than Netflix within a year or two -- and with price increases, it could generate a similar amount of money from streaming overall. Add in the theme-park business, merchandising, and linear TV, and I think Disney has more upside for investors than Netflix today. And I'll bet on the world-building strategy over rolling the dice on content any day of the week.