Regulators are helping accelerate an early test for Alzheimer's disease.

Shares of life sciences company Quanterix (QTRX -0.59%) are up 14% as of 11:30 a.m. EDT today after the Food and Drug Administration granted breakthrough status to its blood test for a biomarker of Alzheimer's disease.

Tau is a protein that stabilizes microtubules in the neurons of the central nervous system. In Alzheimer's disease, tau detaches from the microtubules and tangles. This blocks communication between synapses. Elevated levels of tau are typically found in the cerebral spinal fluid of patients with neurodegenerative diseases, as well as severe brain injuries. Phospho-tau 181 is a specific protein that is more strongly associated with the disease than overall tau levels. The breakthrough device designation is the FDA's way of allowing manufacturers to try and expedite products that offer a potentially more effective treatment or diagnosis for life-threatening diseases. 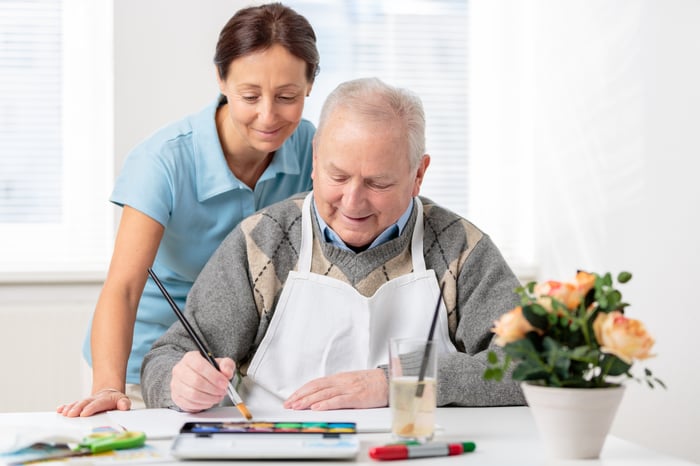 The test from Quanterix -- the Simoa p-Tau 181 -- is currently approved for research use only and is intended to measure the concentration of the protein in blood. That aids in earlier detection of the disease with a goal of providing patients more time to access potential therapies.

The Quanterix test isn't stand-alone. The company intends it to be used in conjunction with other diagnostic tools. Still, it could be an important next step in limiting the impact of the disease. And there could be others on the horizon.

Findings presented at last year's Alzheimer's Association International Conference and published in the Journal of the American Medical Association showed that the disease could also be detected through the biomarker p-tau217 as much as 20 years before the onset of cognitive decline. Further, the study showed blood tests were more accurate than expensive and intrusive methods like spinal taps and brain scans.

The relationship with p-tau217 was validated in Eli Lilly's recent data related to its Alzheimer's drug candidate donanemab. Quanterix management hinted on the most recent earnings call that it was interested in the development, signaling a test for p-tau217 could be in the works.

Why Quanterix Stock Bounced Back on Wednesday