Hint: it doesn't really matter what kind of market it is.

If the last few weeks have you wondering whether a bear market is on the horizon, you're not alone. While it might be worrisome, you aren't powerless in the face of a downturn.

In fact, for biotechs without any products that are approved for sale, a bear market can be a great opportunity to pick up a few shares at a discount. Let's explore why -- and also why there are other biotechs that you might want to be warier of when prices are trending lower. 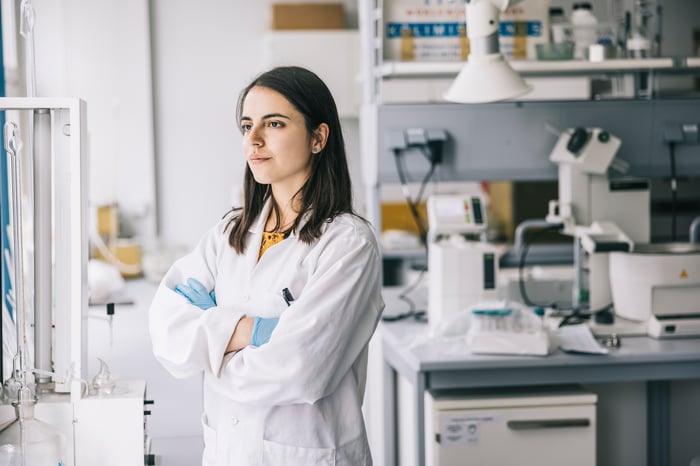 During a market downturn, stocks of many stripes face pressure on their prices.

But the recent price movements of a stock don't change anything about the underlying company's ability to turn a profit or effectively compete. For biotechs that are still developing their first products or testing them in clinical trials, their ability to compete is entirely unproven regardless of the market's inclinations. Nor do they typically have any profits, which means that falling share prices should absolutely not scare you.

Generally, these newbie biotech stocks make major moves in response to updates from their clinical trials. As a project moves through its trials and inches closer to commercialization, the chance of the company realizing a revenue stream from it rises. And the market gets a better feeling for the size of the future revenue, which over time reflects in the stock's price.

Take CRISPR Therapeutics (CRSP -4.09%) as an example. On June 11, when it announced favorable results from one of its headliner gene therapy trials in phase 1/2, it sparked its share price over the next few weeks, raising it from $127 per share to more than $161. Then, as the market adjusted to the news, the price fell back to beneath where it began.

When you buy shares of a young biotech during a bear market, the future value of the stock will still take time to reveal itself, because the market doesn't have all of the information about the performance of the company's medicines. Remember, CRISPR Therapeutics is still nowhere near making a single dollar in revenue from sales of its drugs because they are still in early development. By the time it starts selling them, its valuation will be put to the test, but that has nothing to do with its share price today.

It's possible that the more a company's share price is depressed by external market conditions relative to its future value, the larger your gain will be.

Watch out for mature companies with untenable valuations

The picture changes considerably with biotech companies that have a few drugs approved for sale. For these businesses, valuation is crucial, and it could be a problem for shareholders during a downturn.

Here's why. Once a company is selling its drugs and making regular income, it's possible to determine a value to the stock using tools like the price-to-sales (P/S) and price-to-earnings (P/E) ratios. But a stock's price accounts for the expected cash flows in the future as well as the cash flows in the present.

During a bull market, investors craving growth pile into stocks that have a higher chance to make more money tomorrow than they did today, which is to say that biotechs with promising pipelines are more desirable. If their valuations get stretched relative to their cash flows, there isn't any marketwide pressure that would rein them in.

Take Vericel Corporation (VCEL -5.88%) for example. The company has two commercialized therapies and a handful of candidates in clinical trials. In the last 12 months, its stock has risen by an impressive 145.9%, inflating its valuation to dangerous heights. Its trailing P/E is currently upwards of 254, which is astronomically high compared to the biotech industry's average P/E of near 34. While it's true that Vericel's quarterly revenue is rising rapidly at the moment, it'll slow down to reach a sustainable rate eventually. If that slowdown coincides with a bear market, it's hard to see how its shareholders will avoid taking heavy losses.

In a bear market, fear and uncertainty reign, and investors flock toward grounded and relatively defensible valuations. While a healthy pipeline is never a liability, each additional project tends to increase the ambiguity of a biotech's valuation, which can leave investors open to harsh corrections. Small companies like Catalyst Pharmaceuticals (CPRX -5.61%) don't have this problem, because its one approved drug and its small pipeline make for a relatively cheap valuation, with a trailing P/E of around 7.2.

Therefore, be sure to compare a prospect's valuation to its peers before you invest in a biotech stock during a downturn.

The most important thing to remember when investing in biotech stocks is to diversify your holdings aggressively, and that remains true during a bear market. No matter the stage of development that a company is in, you can't put all your eggs into one basket. Biotech stocks are downright risky, even when the market is favorable.

By investing in several different stocks rather than just one, you'll reduce the chance of your portfolio getting a haircut as a result of one company's failure in clinical trials. Likewise, you'll increase the chances of picking a massive winner.

Finally, don't forget that changes in a stock's price don't influence a company's ability to make money for its shareholders. Even if a biotech stock is getting punished amid a downturn, you shouldn't hesitate to buy it (or sell it) if its competitive abilities and position in the market are strong.