Improved credit and minimal loan growth for these credit card players in Q3 could lead to reserve releases of capital.

American Express (AXP -0.06%), Capital One (COF -3.80%), and Discover Financial Services (DFS -1.69%), three of the major credit card players on Wall Street outside of the megabanks, are set to report third-quarter earnings later this month. It will be interesting to see how these consumer-facing businesses held up during a quarter that didn't always seem to move in a linear fashion. There were setbacks due to the delta variant but also a recovering economy, depending on where you were domestically and internationally.

Let's take a look at what to expect from this trio when each reports earnings. 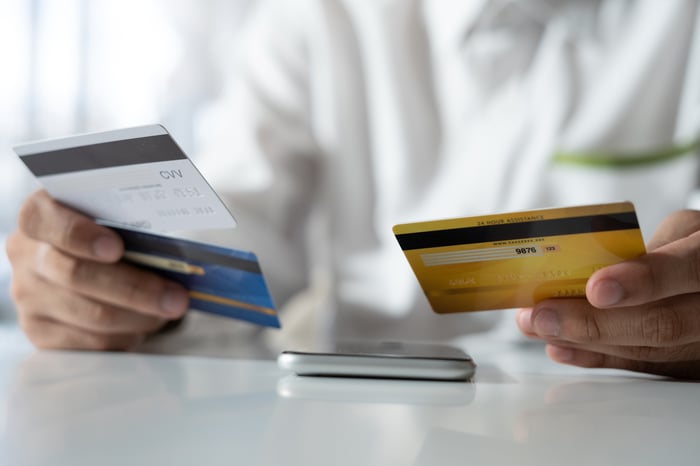 It looks like there will be some loan growth, but investors will likely need to keep waiting before more normalized loan growth returns. On a more positive note, spending levels look to have remained elevated from the second quarter but also stabilized. American Express grew loan balances about 7% in the second quarter, but loan balances were still down 11% compared to 2019. In August, the company reported in a regulatory filing that total U.S. card-member loans had held roughly steady from July.

In mid-September, American Express CFO Jeff Campbell spoke at a Barclays Virtual Global Financial Services Conference and said that loan balances are ticking up but it's not a big trend. He said loan repayment rates are still elevated as U.S. consumers remain financially healthy and continue to pay off debt. Campbell added that overall spending at the company by its customers is up 3% compared to 2019 levels, which is an improvement from Q2. The spending seems largely driven by consumers, Campbell noted, and the company is not counting on a surge in global corporate spending in what remains of 2021 and even into 2022.

Capital One's spending data seemed to be more in line with trends at other megabanks. CEO Richard Fairbank said spending levels were up 25% in Q2 versus Q2 2019, a trend that continued into Q3. Discover CFO John Greene had a similar sentiment, saying that sales halfway through September were up 30% compared to 2019. Greene said travel-related spending was strong through mid-August before beginning to dip, some of which the company believes was due to the delta variant and an uptick in COVID-19 hospitalizations during Q3.

From a higher-level view, consumer debt data from the Federal Reserve showed that total outstanding revolver debt surpassed $1 trillion and grew roughly $3 billion in August, or about 3.6% on a seasonally adjusted basis. That's slower than the growth in July, but it's growth nonetheless. Fed data also show that in Q2 consumer loans including credit cards at all U.S. commercial banks grew about $16 billion. In Q3, that number also looked to be about $16 billion, showing that activity has stayed fairly on pace with that of Q2.

One positive from subdued loan growth and higher repayment rates has been strong credit quality in a business that tends to see higher charge-offs (debt unlikely to be collected and a good indicator of actual losses) than many other loan segments. Here is charge-off and delinquency data (loans with no payment for at least 30 days) from June, July, and August.

With credit, particularly charge-offs, improving in the third quarter, all three of these companies could end up releasing reserve capital previously built up for loan losses during the brunt of the pandemic. This capital would go directly back onto the income statement as profits in Q3 and could aid earnings. However, the size of the reserve release could still be minimal depending on how executives at each of the three companies view the economic outlook.

Earnings could still be decent

While it may not be terribly exciting, American Express, Capital One, and Discover could still report solid earnings in Q3. All of these companies were likely buying back stock during the quarter and reserve releases may also help the cause. The flip side to minimal loan growth is having to write off fewer loans and perhaps loan growth started to improve in September and October as delta cases have leveled off.