When Sinclair Broadcast Group (SBGI -0.82%) acquired Fox's regional sports networks (RSNs) for $9.6 billion as part of Fox's partial sale of some media assets to Disney (NYSE: DIS) in 2019, which included movie studios and characters, it could have been seen as a big win for the company. Regional sports networks were very profitable -- they charged high fees to cable carriers, and generated advertising revenue. What could go wrong?

Two years later, it seems that Sinclair's bet on regional sports has been a disaster. The company is losing cable subscribers alongside the broader industry, and has been shut out of most streaming TV packages, including Hulu, which is majority-owned by Disney. Alphabet's (NASDAQ: GOOG) YouTube TV hasn't been willing to pay a price for RSNs that Sinclair deems acceptable. Sling and Fubo also don't carry the RSNs. This could be a disaster for Sinclair and its investors. 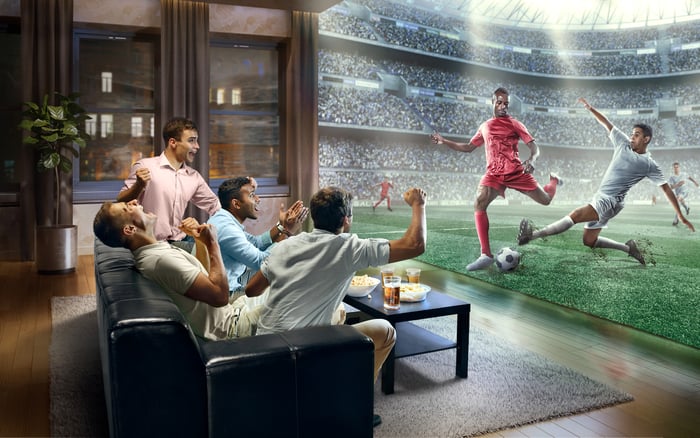 Sinclair is already in trouble

In 2020, RSNs generated $2.56 billion in revenue but had an operating loss of $3.58 billion. The company wrote down $2.6 billion of goodwill (which is a non-cash asset companies need to put on the balance sheet when they make an acquisition) in relation to the RSN acquisition only about a year after the deal closed. Talk about a disaster from the start.

The financial picture can be seen in the chart below. A big acquisition paid for by debt increased revenue, but losses exploded as a result. 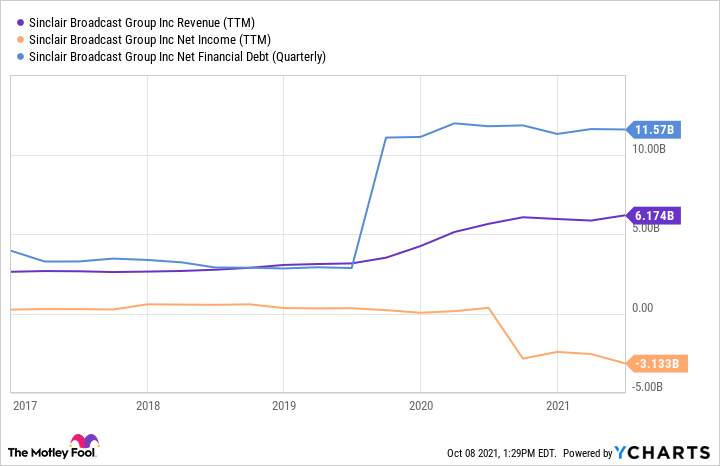 What's the path forward for Sinclair, and will RSNs return to their once-profitable place in the sports landscape? There may not be an easy answer.

I think it's clear that the traditional cable business is in a slow and steady decline, so I wouldn't expect much of an improvement there. Sinclair may be playing hardball on its side of RSN negotiations with streaming cable companies because it plans to launch its own streaming service. The company has been rumored to be looking to raise $250 million to build out its streaming business, offering sports fans an option to watch local RSNs for around $20 per month. In a presentation to investors, management said the streaming business could eventually generate $2 billion in annual revenue.

That sounds like a great idea, and Sinclair hopes to launch the streaming service by baseball season in 2021. But there may be some hangups, like the fact that streaming rights aren't included in at least some of the company's rights agreements. This is from the company's 2020 10-K filing with the SEC:

Many of our existing sports programming rights agreements include springing rights that automatically provide our RSNs with the rights to additional forms of distribution as soon as the leagues permit their teams to exploit those distribution rights. As more of our RSNs are permitted to expand into digital streaming, we expect to monetize our viewership by selling targeted advertising on our digital feeds and by introducing our digital agency services to our RSN advertisers. We believe that our RSN portfolio is well-positioned to capitalize on the ongoing transition of the media world to digital and mobile viewing.

In other words, Sinclair needs leagues to allow local streaming, which isn't currently allowed in RSN contracts. If Sinclair can't unlock these rights, which leagues may not want to give up, the streaming service could be dead in the water.

We also have no idea if people will sign up for streaming RSNs in the numbers Sinclair hopes. I'm already getting streaming subscription fatigue, and certainly don't want to add a subscription that costs more than Disney+ and Netflix just to watch a few basketball games.

If streaming does move forward, it appears that the streaming business will be under the Diamond Sports Group (DSG) business, which is a subsidiary of Sinclair. DSG holds the company's RSNs, and needs to generate more revenue -- it had $1.61 billion in revenue in the first half of 2021, and reported a net loss of $555 million. And with cable subscriptions falling and streaming cable companies not playing ball with Sinclair, there's no improvement for the business in sight.

Sports programming rights costs are also piling up. In the second half of 2021, DSG's programming rights costs are $797 million, with a $1.66 billion bill in 2022 and $1.61 billion in 2023. In total, the company owes $14.0 billion to sports franchises for the rights to show their games in the future. But I highlighted above that those rights don't (yet) appear to include local streaming.

Sports leagues may have other plans

Sinclair has short-term challenges with cable streaming and a potential challenge building out streaming RSNs. But the long-term challenge is the rights for content that Sinclair only leases from others.

RSNs typically sign agreements with local teams for local broadcasts, which is why the streaming business would only apply to local content. But as leagues grow and develop their own subscriptions and streaming content, why would they want to let an RSN control distribution?

The entire idea of RSNs is predicated on a localized distribution model for TV content. Cable companies owned the physical lines going into homes in local areas, and airwaves are licensed on a local or regional level. Maximizing revenue for sports leagues meant making content deals that would reach national customers (ESPN and ABC are examples) and those that reach local customers (RSNs).

In the age of the internet, there are no regional or physical boundaries on where content can be distributed, except those contrived and agreed to by sports leagues themselves. As streaming continues to grow, why should leagues put boundaries on their revenue opportunity or allow a distribution layer to take a cut of the revenue when they can reach customers directly?

A decade from now, the NBA, MLB, and NHL could have a menu of games available for any user anywhere in the world, and RSNs would be rendered obsolete. The existence of NBA TV, NBA League Pass, NHL Live, and MLB.TV shows that leagues see the opportunity and are building the infrastructure they need to be in the streaming content business long-term. Sinclair may be in trouble when current RSN contracts run out.

Sinclair is between a rock and a hard place

Short-term, Sinclair is losing traditional cable TV subscribers, and can't get streaming cable companies to pay it what it wants for RSNs, and that's leading to massive losses for the business.

Long-term, I think sports leagues are looking to cut out the cable and RSN middleman, and will instead reach fans directly in more and more ways.

The company is stuck in the middle, hoping that sometime in the next year or two a streaming service of its own will build some kind of local sports streaming business.

I have my doubts that any of this will work out well for Sinclair. The company's financials don't look promising right now, and there's $12.5 billion in debt on the balance sheet, most of which is from acquiring these money-losing RSNs. Unless RSN streaming is the future of sports content, this is a company whose future isn't looking bright at all.