Please ensure Javascript is enabled for purposes of website accessibility
Log In Help Join The Motley Fool
Free Article Join Over 1 Million Premium Members And Get More In-Depth Stock Guidance and Research
By Parkev Tatevosian, CFA – Oct 14, 2021 at 7:53AM

Investors will be looking for Chipotle to continue its momentum when it reports Q3 earnings on Oct. 21.

Chipotle Mexican Grill (CMG 0.42%) will report its fiscal third-quarter earnings on Oct. 21. The company is benefiting as economies are reopening, and folks are returning to dining inside at restaurants.

Surprisingly, Chipotle had managed to sustain a large part of the digital sales gained during the pandemic-induced lockdown when folks spent most of their time at home. So it's certainly going into third-quarter earnings with lots of momentum behind it. Here are a few things investors should know heading into the announcement. 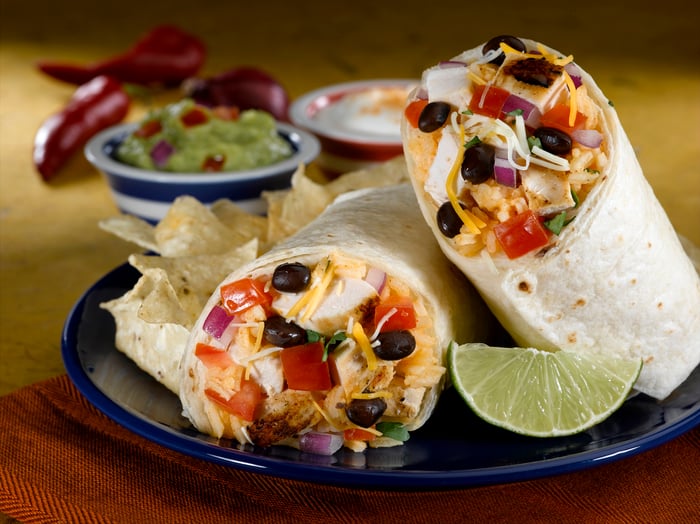 Chipotle is getting the best of both worlds

First, Chipotle increased total revenue by 38.2% in its second quarter that ended June 30 from the same time last year. A combination of factors fueled the boost, and the most prominent was the reopening of restaurants to in-person dining. Management noted that it had recovered 70% of in-restaurant sales from pre-pandemic levels. While that's solid progress, there's still more room for recovery from pandemic-caused disruptions. As a result, investors should keep an eye out for in-person dining figures.

Second, digital sales did not erode as expected when in-person dining gradually returned. Digital revenue in Q2 grew 11% from the year-ago quarter and totaled 49% of overall sales. Digital sales include either delivery of ordered food to a customer's location or food that a customer picks up at the restaurant (usually via a dedicated drive-thru lane called a "Chipotlane") after placing an order online. The latter generates the highest margin for the company and has been gaining traction since the lockdown. Investors need to check if momentum in digital sales is continuing when Chipotle reports its Q3 results. The company has been equipping most of its new restaurants with Chipotlanes.

Third, management stated that the fast-casual restaurant chain would add at least 200 restaurants for fiscal 2021. With approximately 2,850 stores operating, there's a long runway for growth as the stated goal is to reach 6,000 in North America. During the second-quarter conference call, management raised its adjusted unit volume (sales from each location) target from $2.5 million to $3 million.

That said, there will be challenges to that goal in the near term. Supply chain bottlenecks, including materials and labor, could hamper new store growth and perhaps even hurt sales at existing stores. The company recently raised wages for its employees to an average of $15 per hour, and it will be interesting to see if that was enough to attract sufficient staff for its restaurants.

On a positive note, Chipotle implemented 3% to 4% price increases on its menu items to offset costs, and in response, consumers did not reduce purchases yet. Management, as a result, believes it has more pricing power and can increase prices again should it need to or want to. However, investors need to watch management's comments on costs closely during next week's earnings.

Analysts on Wall Street expect Chipotle to report total revenue of $1.93 billion and earnings per share of $6.31 for the third quarter.  Should the company hit revenue estimates, it would be a 20% increase from the $1.6 billion in Q3 last year.

Chipotle stock is a market darling in 2021; it's already up 35% year to date, versus the S&P 500's 18% climb. If the company reports anything in its Q3 results that spook investors, it could cause the stock to pull back.