During October, many Americans acknowledge breast cancer awareness month in an effort to fight this horrible disease. It is the second-leading cancer among women, behind lung cancer. About 13% of all women in the U.S. will develop the disease.

In a relentless effort to overcome this challenge, the medical community and pharmaceutical companies are heavily involved in the investigation, development, and production of treatments that could save the lives of millions. Among the companies leading the charge is AstraZeneca (AZN 0.55%). Its promising results in recent clinical trials might one day help the 3.8 million American women who have a history of breast cancer. It could also reward the company's investors with a 40% gain if analyst price targets are met. 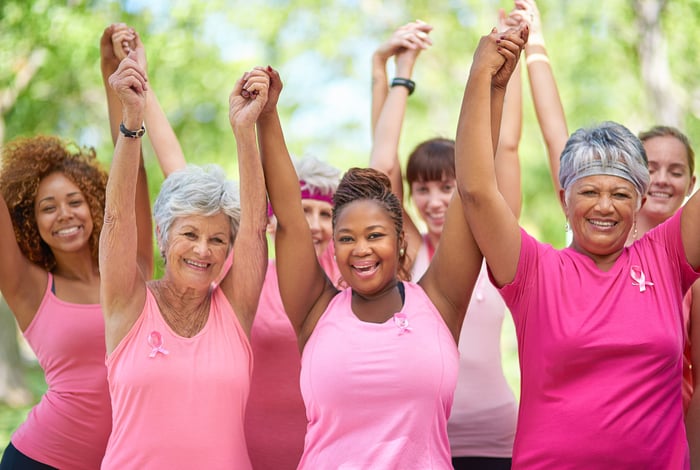 Researchers and medical professionals are making progress in the fight against breast cancer. From 2013 to 2018, the overall death rate from the disease has decreased by one percentage point, a small but encouraging statistic that the fight is winnable.

In August, AstraZeneca announced that its leading breast cancer treatment, Enhertu, is showing signs that it can reduce the risk of tumor progression or risk of death by 72%. This appears to be better than the current standard of treatment, trastuzumab emtansine -- sold under the name Kadcyla, by Roche. Additional results showed that 94% of individuals treated with Enhertu were still alive at the one-year mark after starting treatment, compared with 86% of those treated with Kadcyla, highlighting a 10% improvement in the one-year survival rate. And in the secondary endpoint of the study, Enhertu had a progression-free survival rate three times that of Kadcyla, with a median overall survival of 25 months, compared to 7 months.

To be clear, Enhertu is not a new drug. It first received Food and Drug Administration approval in December 2019, for use as a treatment for patients suffering from metastatic breast cancer who had been previously treated with two or more anti-HER2 regimens.

The new study results, reported in August of this year, highlight the success of Enhertu and its potential to be used in earlier stages of breast cancer. AstraZeneca's executive vice president for oncology research and development, Susan Galbraith, stated that the results show "superiority" over the current standard of treatment. Galbraith also added, "the encouraging safety data" could bring future opportunities to treat patients in earlier stages.

In the first half of 2021, Enhertu generated $89 million in revenue, an increase of 148% over the same period last year. This mostly comprised of collaboration revenue with partners including Daiichi Sankyo, from which AstraZeneca receives royalty payments for Enhertu on sales generated in Japan.

Should the success of phase 3 trials lead to Enhertu becoming effective as an earlier-stage treatment for breast cancer, it could lead to the establishment of a new standard-of-care treatment. Potentially replacing Kadcyla, and moving AstraZeneca one giant leap closer to the $1.8 billion in sales that Kadcyla generated for Roche in 2020.

The possibility of that kind of revenue jump would likely get the attention of analysts and investors alike. Over the past five years, AstraZeneca's stock price has seen a steady climb up -- the kind investors love -- going from $26 in 2017 to just shy of a recent all-time high of $61 (split-adjusted).

AstraZeneca has clinical data on its side, and analysts carry an average 12-month price target of $70, representing a potential 18% gain above the current price. Combine that with a high analyst target of $103 (a possible 40% gain), and the potential to move in on $1.8 billion of a competitor's revenue and investors have a lot to get excited about. This pharmaceutical giant just might be on the doorstep of a long-term investor's five-year plan.

Is This Monster Stock on the Verge of a Home Run?
363%