It's amazing that more people haven't heard of them.

When the financial media mentions "tech stocks," many people equate the term with consumer hardware or business software. After all, those are the companies that get talked about the most, so they're what many of us are most familiar with. But they aren't necessarily building the future.

For that, you need to find the companies that are behind the scenes. If "software is eating the world," as Marc Andreessen famously wrote, who is making it possible? It turns out, companies like EPAM Systems (EPAM -0.34%), Ubiquiti (UI -1.16%), and ASML (ASML 1.40%) are. And with technology taking center stage in the 21st century, these stocks could have a long runway of growth ahead of them. 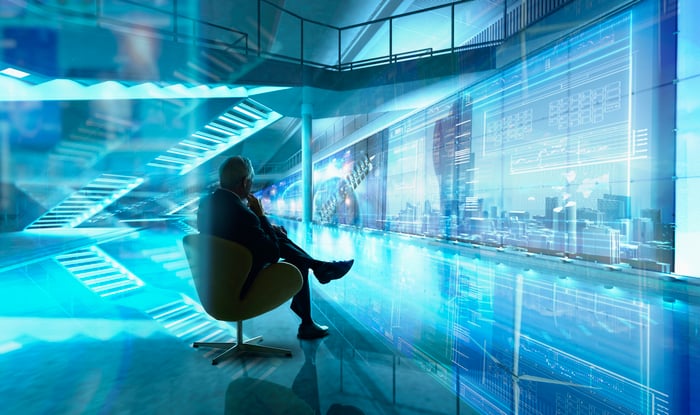 EPAM was co-founded by Arkadiy Dobkin in 1993 as a software engineering provider. Dobkin is still CEO, 28 years later. Ark, as he is known, has overseen a 4,000% rise in the stock since its IPO in 2012. Today, the company produces more than $3 billion in annual revenue and employs 41,000 people across the globe. It has expanded its services to include strategy, consulting, and innovation. But it is still firmly rooted in developing software applications for clients. Another thing that has never changed is EPAM's reliance on technical resources based in Eastern Europe. The bulk of its associates are in Russia, Ukraine, and Belarus. That's kept it off the radar of many analysts.

EPAM serves clients across most corners of the economy. It lists industries from media, financial services, and consumer travel to life sciences and technology as clients. Business is booming. For the first six months of 2021, revenue was up 30% over 2020. Last year, revenue was only 20% higher than the year before. The pandemic drop-off interrupted the company's nine-year streak of greater than 25% year-over-year revenue growth -- as far back as public data goes.

The future looks bright, too. On the most recent earnings call, Dobkin said customers are opting for larger multi-year engagements as they look to leverage not only EPAM's engineering talent, but also its design and product management resources. That's in line with the company's EPAM Continuum offering that brings multiple teams together for a single client. That's part of what led management to raise guidance for the full year. It now expects sales to be at least 37% higher than 2020 and earnings per share to be at least $8.25. With a market capitalization of only $33 billion, shareholders should not have to worry about growth slowing anytime soon.

Ubiquiti makes wireless and networking equipment for both the consumer and enterprise markets. Hardware for internet access, as well as routing and switching equipment, are the company's bread and butter. It also sells cameras, lighting controls, and antennas. It's tantamount to an a la carte, do-it-yourself networking solution. That positions it as a democratizer of network technology. Ubiquiti says it has shipped more than 85 million devices to more than 200 countries and territories. And it's doing it without a traditional salesforce. Instead, it relies largely on brand awareness and an active user community for service support.

Investors who like to analyze a lot of information from a company aren't going to find much on Ubiquiti. Robert Pera -- the company's CEO and owner of the Memphis Grizzlies basketball team -- had been somewhat argumentative with analysts on earnings calls since the company went public in 2011. At the end of 2018, he simply quit holding them. The company has been criticized by short sellers for various transgressions, and in 2015 it admitted to being duped out of $47 million by fraudsters impersonating overseas employees. Famed short seller Andrew Left even called the company an outright fraud.

So why highlight Ubiquiti? Because that was four years ago and Ubiquiti's financial performance has remained astounding. Since the accusation, revenue has climbed 87% and operating profit is up 128%. Per-share metrics are even more impressive. Pera owns about 75% of the company and he has bought back about 20% of the available shares since 2018. It's led to a near quadrupling of earnings per share since Left made the accusation. Over the years, Pera has taken advantage of periodic uncertainty to make huge share repurchases.

Although it isn't a household name, Ubiquiti is bringing networking technology to the masses -- including less-developed geographies. It is doing so without the traditional corporate overhead. That's leading to piles of cash that the founder is using to buy back shares. It's a curious story to be sure. But it has led to better than 500% returns since the 2017 short-seller report, and 1,660% since going public. Investors willing to own an unconventional company may be rewarded with continued outstanding returns going forward.

ASML is the leading global producer of photolithography machines, which use light to etch designs onto silicon wafers -- the material used to create semiconductors. Those semiconductors are then put into computers, smartphones, and all manner of other electrical devices. ASML's extreme ultraviolet (EUV) technology, which is unique to the company, enables the production of the smallest chips to date.

For a sense of where the company sits in the value chain, its largest customers are chipmakers like Taiwan Semiconductor, Samsung, and Intel. And its technical supremacy has led to a doubling of market share in the last decade and a half, estimated at 62%. The future keeps getting brighter thanks to demand from artificial intelligence, 5G, edge computing, and cloud applications. At its recent investor day, management raised its long-term revenue outlook to between 24 billion euros and 30 billion euros for 2025. It brought in a little less than 14 billion euros in 2020.

Its forecasted growth, dominance of a critical industry, and technical superiority make ASML one of the most important companies on earth. And Wall Street has noticed. Shares are up 380% since the beginning of 2019. Back then, the stock traded for less than five times sales. Today, it's 16 times the last 12 months' revenue. There's a big caveat, though. Not only are interest rates a lot lower than they were at the beginning of 2019, ASML also has much higher operating margins. That doesn't make it cheap. But it makes today's price a fair one for such a high-quality business.