The old tech firm provided some new long-term projections for what's to come after its structured shake-up in November.

Over the last year, IBM (IBM 0.68%) shareholders have been getting a slow drip of information about the planned November spinoff of its managed infrastructure business into a new publicly-traded company that will be called Kyndryl.

Recently, the storied tech firm provided more details on how it will operate once Kyndryl is sent on its merry way. The new IBM won't be an exciting high-growth company. Still, it will be rejuvenated enough that its stock will be worth another look, especially for investors who are interested in assets that offer a balance of gradual growth and income too. Getting out of the low-margin managed infrastructure business

Corporate spinoffs -- where a company divests itself of one or more of its operating segments -- can be fantastic events for shareholders in aging businesses. Once IBM packages up its managed infrastructure services unit and launches it as an independent public company in November, IBM shareholders will also own shares of Kyndryl.

The practice of offloading legacy operations that no longer dovetail with a company's main priorities can help a company focus more tightly on its highest-growth and most profitable segments. In the case of the Kyndryl spinoff specifically, there might be good reasons for IBM owners to sell the new shares shortly after they receive them. Kyndryl will be a large-cap business right off the bat, valued at some $19 billion, but its profit margins will be dismal, and the underlying operation has a history of slowly evaporating market share.

This maneuver won't take IBM completely out of the low-margin managed infrastructure game, but its reduced exposure to legacy IT will leave it more focused on the higher-margin operations of cloud computing and related consulting services. In fact, based on initial forecasts, IBM will bring in far less revenue post-spinoff but should still generate essentially the same amount of free cash flow as it did beforehand. No wonder management decided it was time to cut Kyndryl loose.

Thus, the result will be a smaller IBM and a far more efficient one with the same cash-generating power as before. And it will be much better positioned to invest in new growth initiatives or return money to shareholders via dividend payouts and share repurchases.

There is an overarching theme running through all four segments called hybrid cloud -- basically, managing an organization's updates from old in-house IT infrastructure to new cloud operations. This platform switch is frequently referred to more loosely as a "digital transformation" by other companies in the industry. Whatever one calls it, IBM will be more squarely focused on this theme, and will have opportunities to grow its presence in the cloud computing universe. It still won't be a fast-moving firm, but it will be in much better shape than it has been. And the Kyndryl separation should fix IBM's problem of diminishing sales for now. 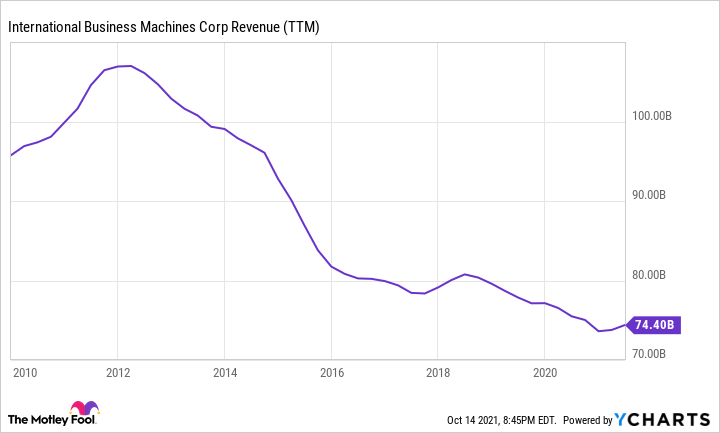 Plus, though this will remain one of the more pedestrian names in the tech industry, IBM is expected to accelerate its free cash flow growth to a high single-digit percentage rate in each of the next three years. And the combined post-separation quarterly payouts of IBM and Kyndryl should add up to the same amount as the current dividend, too. (At recent share prices, it has been yielding 4.7%.) But given its refreshed financial strength, the new IBM will have more wiggle room to pay off debt, make new investments, and return excess cash to shareholders in the years ahead.

Simply put, completing the spinoff of Kyndryl won't totally transform IBM. Still, this long-awaited offloading of some of the company's legacy services will be a good thing. So if dividend income is what you're after, this is the best time in a decade to own IBM stock.