Shares of genetic data miner 23andMe Holding (ME 2.88%) had surged 16% as of 12:15 p.m. EDT trading Friday after the stock received a positive mention on CNBC last night.

As StreetInsider.com reports today, EMJ Capital founder Eric Jackson called 23andMe a "top pick" both for its subscription business (whereby customers sign up to receive genealogical data and periodic health research updates) and its therapeutics business (whereby 23andMe collaborates with drug companies to develop drugs based on the genetic data it collects).

This latter business, said Jackson, "is uniquely differentiated" from run-of-the-mill drug developers, and gives 23andMe and its partners "a platform that enables novel discoveries into the causes and potential treatments of a wide variety of diseases at unprecedented statistical power." 23andMe's database, with more than 11 million customer samples and 1 trillion genotypic and phenotypic data points, gives the company and its partners "a core competitive advantage that is not easily replicated," Jackson said. 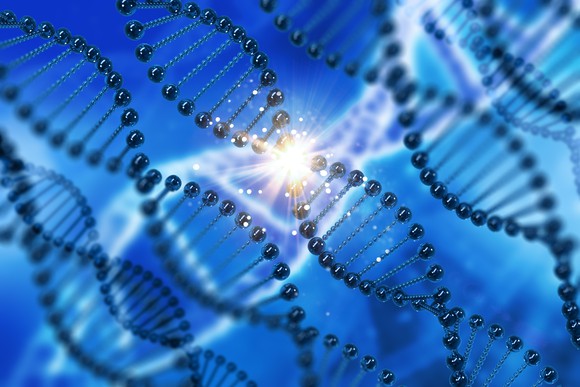 I'll say. It's taken nearly 15 years for 23andMe to amass its current database of genetic information. Only one company has a larger database -- AncestryDNA, which is now owned by Blackstone, and which according to data from S&P Global Market Intelligence had a 17-year head start assembling its database. And the next largest company in this space (MyHeritage) has a database less than half the size of 23andMe's.

If scale is the key to success in designing novel drugs based on large amounts of genetic information -- and logic suggests that it should be -- then 23andMe has a heck of a head start over most of its competitors -- and over all of its publicly traded competitors for sure.

Why 23andMe Stock Was Lagging the Market Today
395%