The mining company could report big numbers next week as the copper price surges.

Freeport-McMoRan (FCX 1.72%) shares were on fire this week, popping 14.3%, according to data from S&P Global Market Intelligence. A torrid run in metal prices has sparked strong investor interest in the copper stock ahead of the company's quarterly earnings release.

As metals and mining markets are cyclical and volatile, prices of base metals can remain stagnant for long periods of time. That's what's happened with copper prices -- they've languished since the beginning of the decade. This year, though, the price of copper started to rally alongside other metals, but no one could have predicted the kind of dramatic rally we're witnessing right now: Copper just hit a record high of $4.78 per pound, or roughly $10,518 per metric ton on the Commodities Exchange, or COMEX.

The biggest trigger for this stunning price surge is tight global supply, with copper inventories at the London Metal Exchange (LME) tumbling to levels last seen in 1974. Yes, you read that right. As last reported, the LME had only around 14,150 metric tons of copper not earmarked for delivery. For perspective, nearly 25 million metric tons of copper are consumed globally every year.

Blame the power crunch in Europe and China. 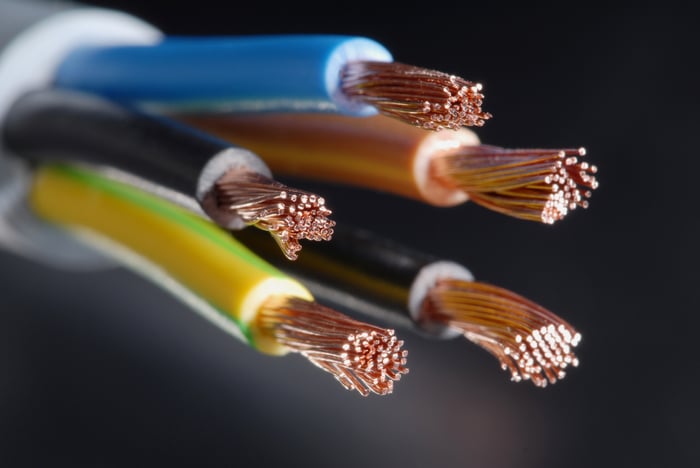 While copper is primarily used in electrical equipment, it is also an important metal used for industrial machinery and construction, specifically roofing and plumbing. Initially, the reopening of global economies after pandemic-induced lockdowns spurred demand for copper. But just when many thought China's curbs on the metals and mining sector to cut down pollution and a potential property crisis in the nation could bring the copper rally to a grinding halt, Europe's power crisis spiraled out of control.

Meanwhile, copper has found its way into electric vehicles and renewable energy industries like wind, fueling demand even further.

With supply tumbling and prices soaring, any company that mines copper during these times could make a killing.

Freeport-McMoRan is the largest U.S.-based -- and among the world's five largest -- copper mining companies in terms of 2020 production. It's no surprise, then, that investors bid its shares higher in a week when copper prices hit a new high.

In the last quarter, Freeport-McMoRan's revenue jumped 88% year over year, driving the company's cash from operations up almost fivefold. As expected, it used extra cash to repay debt and reaffirmed its intention to return more capital to shareholders. And that prospect has got investors excited: With the copper price flying in recent weeks, investors expect Freeport-McMoRan to deliver bumper numbers for its third quarter and dole out larger dividends over and above its base annual dividend of $0.30 a share. With the company set to release its Q3 numbers on Oct. 21, this stock's worth a watch.