The consumer-direct mattress specialist has declined 30% over the last year. It can bounce back.

It's been a rough year for Casper Sleep (CSPR) investors. The direct-to-consumer mattress seller has seen its shares tumble 30% in 2021 through Thursday's close. The stock is down 64% since settling for an initial public offering priced at $12 a share last year.

Casper Sleep stumbled from the start of its publicly traded tenure. Underwriters were hoping to price the offering as high as $19 when it hit the market in February of last year. It had to settle for $12, and the shares have been trading in the single digits for most of its public life.

The irony here is that Casper Sleep's IPO came just weeks before the pandemic essentially forced us back into our homes. The shelter-in-place phase of the COVID-19 crisis gave us months to assess our homes or move to cozier digs, and suddenly spending on home furnishings bubbled up to the top of the priority list. We saw shares of online furniture retailers and makers of bean bag chairs and adjustable air-chambered mattresses skyrocket in 2020. Casper Sleep didn't follow suit. It could've bounced back in 2021, but that also failed to materialize. What happened? Let's go over the bad breaks that Casper Sleep faced this year -- and what it has to do to claw its way back to give its shareholders a good night's sleep again. 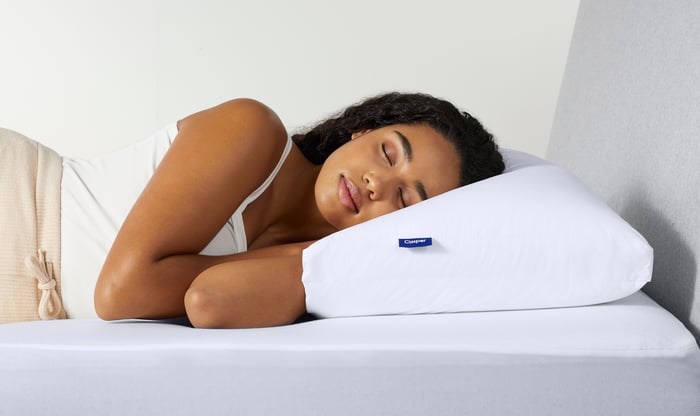 Casper Sleep is doing a lot better than you would expect for a stock that has surrendered nearly two-thirds of its IPO value. After seeing sales decelerate sharply through the past couple of years -- going from 43% top-line growth in 2018 to 23% in 2019 and 13% last year -- guidance calls for revenue growth to accelerate with a roughly 20% uptick in 2021.

The bad news is, well, just about everything else. Casper Sleep moved to wind down its European operations in the springtime of last year, focusing its efforts on achieving profitability closer to home. Losses have narrowed, but analysts don't see the red ink ending anytime soon.

The market still seemed as if it was finally warming up to the Casper Sleep story earlier this year, and in June the stock did something it has never done before. Casper Sleep shares hit its IPO price of $12, nearly doubling year to date. It obviously didn't last.

The biggest dagger was the second quarter that seemed so promising at first glance. Revenue rose 38% in its latest report. Back out the European operations that no longer exist and you get an even healthier 45% year-over-year surge for its North American business. The stock still took a double-digit percentage hit on the report. The company warned of revenue growth slowing to 26% for the third quarter and less than 20% for all of 2021.

Supply chain constraints -- a common complaint these days -- are hampering its chances to keep up with demand. The other end of the income statement is also being weighed down by inflationary pressures in raw materials, freight, and labor costs.

If you believe that the setbacks are temporary there's obviously plenty of upside here. This is a stock that has given up roughly two-thirds of its value since June, but it's still growing its business at a double-digit percentage clip. Beyond its 72 retailer stores and website where Casper Sleep sells directly to consumers it's also seeing its sales through retail partnerships grow even faster. It's not ready to return to Europe, but last month it did enter the Canadian market.

Casper Sleep may be priced as a penny stock these days, but it has a much more sustainable business than many of the speculative investments trading at similar price points. If it can keep expanding its reach as it manages its costs it has a strong chance to bounce back in the months and years to come.

The Fall and Rise of Casper Sleep Stock
405%