The media giant has come a long way with its new helmsman.

This is going to be a contrarian piece, so buckle up, pull on the yellow strap, and let's go for a ride.

Walt Disney (DIS 0.84%) CEO Bob Chapek isn't exactly a well-liked helmsman in theme-park enthusiast circles, and we'll get to that. More to the point, shares of Disney are trading lower in 2021, a sharp contrast to the broader market's nearly 20% ascent.

Can the CEO behind a rare sinker in 2021 -- especially one that's getting blasted on social media -- really be on the short list for top honors? I promised you a ride. Let's hit Chapek's road to redemption. 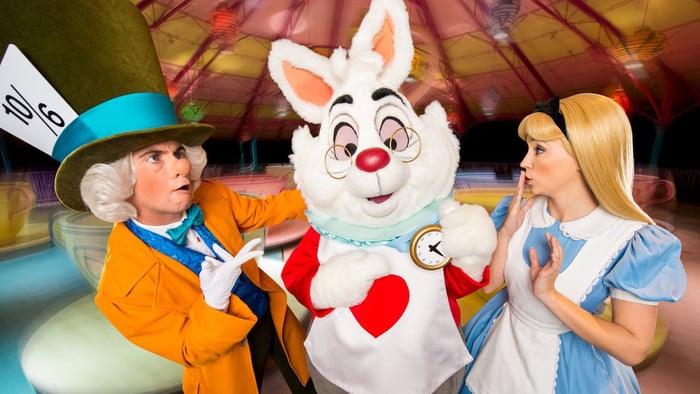 No one puts Bambi in a corner ... office

Chapek was handed the reins at an awful time. Outgoing CEO Bob Iger tapped Chapek as his replacement on Feb. 25 last year. Less than three weeks later, Disney would have to shutter its theme parks, empty out its cruise ships, and pull its movies from multiplexes. The COVID-19 crisis hit Disney hard, yet shares of the media giant are actually up 38% since his promotion.

A big 2020 bounce for the stock naturally accounts for all of the investment's success under Chapek. Disney+ was the perfect comfort food for investors and "shelter in place" homebodies alike. However, Chapek has had to earn the recovery in 2021.

It wasn't allowed to open Disneyland until the springtime of this year, yet the media giant's theme parks business surprised everyone by returning to profitability in its latest quarter. The country's cruise lines weren't permitted to sail again until this summer, but bookings for future sailings are strong enough to impress the most jaded of landlubbers. Despite holding back on theatrical releases to keep its streaming services thriving, Disney's studio entertainment arm has put out this country's two highest-grossing films of 2021.

The 45% year-over-year surge it posted in revenue for its latest quarter was its biggest increase in decades. Last year's results were depressed, of course. It's still a notable achievement.

Why do theme-park fans relish knocking Chapek? A popular complaint is that Disney is relying too heavily on new rides and attractions based on recent theatrical hits, as if somehow that isn't the reason a media behemoth owns gated attractions in the first place. It's an odd flex since the attractions opening now were announced years before Chapek was CEO. It's also even more strange when folks argue that Walt Disney himself would be turning in his grave, since the original Disneyland was anchored by Fantasyland at its core, a land that pays homage to the most successful animated films put out by the House of Mouse at the time.

Chapek also gets called greedy, not necessarily a bad trait for a fresh CEO at a company with untapped pricing flexibility. His biggest critics are typically Disney World and Disneyland annual pass holders that are paying just $1 to $4 a day for year-round access to Disney's theme parks.

The biggest sticking points for the boo-birds are the Genie+ and Lightning Lane+ offerings that will officially roll out at Disney World on Tuesday. Shareholders are going to love this, but let's spell it out so you can see the venom ooze out. Guests will be able to pay $15 a day for limited access to expedited queues through Genie+. The Lightning Lane+ platform offers one-time access for eight of the resort's busiest attractions for as much as $15 per ride.

All of Disney World's relevant rivals offer premium platforms to shave queue wait times. It's a no-brainer money maker, and a godsend to people that can't make it the theme parks very often. Whether you're paying $3 a day as a pass holder with free parking or you're paying at least $169 for a one-day park-hopper ticket and another $25 for parking, everyone has the ability to pay another $15 for Genie+, yet it's the folks paying $3 a day who are complaining about getting robbed.

Disney's new fiscal year that started this month is going to be strong. Audiences keep growing for its premium streaming services, and ad revenue for its media networks is on the rise. The studio pipeline is loaded with promising theatrical releases. Theme parks now have a way to make more money on more manageable crowds. A fifth ship gets added to its cruise ship fleet next June. The future is bright for the entertainment stocks bellwether.

Chapek was dealt a bad hand when he was tossed the keys to the kingdom as the global pandemic went for the jugular. He has played that hand well.