The best investment candidates in a downturn can often be the stocks you already own.

It may come as a surprise, but sometimes stocks that you already own may turn out to be the best places to park more of your money. These are, after all, companies that you have researched and read up on, and that you have felt confident enough to invest a portion of your capital in. Looking at companies you already own also saves time, as you need not face a steep learning curve when reading up on potential new investments.

Familiarity aside, I apply the same standards for buying more of stocks that I already own as with those that I don't. Strong brand names, market leaders, a great track record for growing revenue and net income, and the ability to increase dividends over the years are examples of great reasons to add on to an existing position. In addition, each business should have clear catalysts for continued growth well into the future, either by latching on to trends or by leveraging its dominant position to extend its reach and increase its market share. 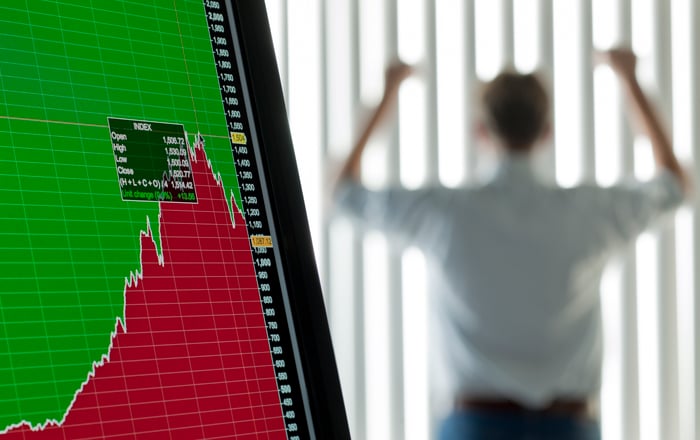 A market crash helps to bring down the share prices and valuations of such companies, but it does not adversely impact the attributes that make such stocks compelling buys. Here are five stocks that I own and am comfortable adding to should the market crash tomorrow.

PayPal (PYPL 2.32%) is among the leading online payment portals that saw surging demand during the pandemic. For its fiscal 2021 second quarter, total payment volume spiked by 40% year over year to hit $311 billion, while the company also added 11.4 million net new active accounts. Revenue climbed by 19% year over year for the quarter and the business generated a free cash flow of $1.1 billion over the same period.

And it seems like PayPal's growth momentum should continue as it doubles down on its buy now, pay later (BNPL) initiatives. The company recently launched a BNPL service in Australia, serving around 9 million customers there, and also plans to expand its offering in Germany. PayPal's $2.7 billion acquisition of Plaid, a BNPL player in Japan, helps it scale up its offering in the country, which counts as the third-largest e-commerce market in the world.

Tractor Supply (TSCO 2.33%) bills itself as the largest rural lifestyle retailer in the U.S. The pandemic has caused many people to hunker down and focus on the care of their homes and farms, leading to a surge in demand for the company's range of products. Its second-quarter 2021 earnings report card showed a 14% year-over-year jump in net sales, while net income rose by 9.3% year over year to $370 million. Tractor Supply also upped its full-year revenue forecast and projected low-double-digit growth in comparable-store sales, up from mid- to high-single-digits previously.

With the company's loyalty program, Neighbor's Club, hitting the 21 million-member mark and new customer retention reaching all-time highs, it seems Tractor Supply can chalk up healthy growth on both the top and bottom lines in the years to come.

Adobe (ADBE 1.90%) prides itself on being a leading software-as-a-service platform that allows its clients to have access to a plethora of services, such as digital transformation, creative images, and electronic signatures, among many others. The company's fiscal 2021 third quarter saw it reporting record revenue of $3.9 billion, up 22% year over year. Net income climbed by nearly 27% year over year to $1.2 billion.

Adobe continues to build its capabilities through acquisitions. It announced this month that it had just completed the purchase of Frame.io, a cloud-based video collaboration platform. This acquisition will boost the company's video capabilities across a wide suite of applications, such as Adobe Photoshop and Adobe Illustrator, to name a few.

One of the largest and most prolific sports brands in the world, Nike (NKE 0.76%) showed its resilience during the pandemic by pivoting to online sales via digital channels. Its fiscal 2022 first-quarter earnings continued the growth momentum, with revenue at $12.2 billion, up 16% year over year. Net income jumped by 23% year over year to $1.9 billion, and digital sales surged by 25% year over year.

The company did, however, lower its full-year guidance due to supply chain issues that hit its factories in Vietnam and Indonesia. COVID-19-related shutdowns have resulted in Nike losing 10 weeks of production since July, while port and rail congestion has lengthened lead times for goods to arrive in America and the EMEA regions. These issues are short-term in nature, though, and should not affect the long-term growth of the company.

All of us have probably used the Google search engine before, one of the core products of Alphabet (GOOGL 1.96%). The pandemic has accelerated digital adoption and led to a massive surge in internet traffic, benefiting Alphabet and other internet-related businesses. For Q2 2021, the company reported that revenue soared by 62% year over year to $61.9 billion while net income jumped from $6.9 billion to $18.5 billion.

Alphabet has partnered with French company Thales to jointly develop a hyperscale cloud offering for France. This partnership will enable both private and public sector entities to have access to secure cloud computing services. Customer service will be handled within the country and the new company formed from the partnership will also provide services such as data encryption, administration, and supervision.

Talking About the Metaverse With Venture Capitalist and Author Matthew Ball

Do Non-Tech Companies Need to Be in the Metaverse?
395%