Three big names in the stock market are paying more for investors to own their stock.

Since the fiscal years of most companies coincide with the actual calendar, we tend to get a clutch of dividend raises near or at the end of a year. In 2021, many businesses continued to do well, despite the deleterious effects of the coronavirus delta variant, and many are so far hewing to this tradition.

For income-loving investors, it's crucial to note there's still some time to take advantage of the boost each of these stocks gave their investors. 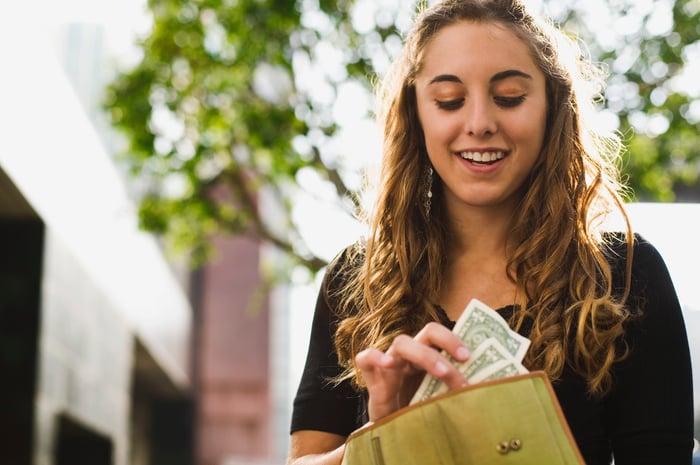 Never shy to spend billions on shareholder-retaining measures, Microsoft announced an 11% dividend raise last month. The new amount for the quarterly payout is $0.62 per share. That accompanies a new share-buyback program, under which the tech company has authorized up to $60 billion in such buys.

Microsoft might not be the seemingly all-powerful company it was in the pre-smartphone days when PCs were the mass tech gadget of choice, but it's still doing very well. That's thanks not only to continued dominance in the durable PC operating system market, but also to involvement in lively segments such as cloud computing.

For the entirety of its fiscal 2021, the company managed to grow its revenue by almost 18% (to just over $168 billion), while net income surged 38% higher, to more than $61 billion. Consistent strong growth in the company's three very profitable business areas keeps adding to the company's considerable free cash flow, hence the big stock-buyback number and the double-digit percentage dividend raise.

Analysts tracking Microsoft expect it to keep barreling down the growth path. Collectively, they believe GAAP per-share earnings will rise by almost 26% from fiscal 2021 to 2023, on the back of a 29% improvement on the top line. We can therefore expect more buybacks and fresh dividend raises along that road, too.

Microsoft's new dividend will be paid on Dec. 9 to stockholders of record as of Nov. 18. At the current share price, that $0.62 payout would yield 0.8%.

Despite the slump in oil prices during the worst parts of the pandemic, Phillips 66 resolutely refused to cut its dividend, unlike some of its peers. Now that the price of oil has rebounded on the back of economies that are reopening in fits and starts, the company is on steadier financial ground.

Consequently, for the first time since mid-2019, Phillips 66 declared a dividend raise. It's now paying $0.92 per share for its quarterly disbursement, up slightly from the $0.90 it had been doling out previously. Recovery is the word of the day at Phillips 66. With higher demand for petroleum products as the coronavirus (hopefully) comes under control, the company's fundamentals are approaching pre-pandemic levels.

Phillips 66 will report its Q3 earnings on Friday, Oct. 29. Collectively, analysts are expecting recovery-tinged metrics, with a per-share adjusted net profit of $1.82 on the back of a slight dip in quarter-over-quarter sales. Both the top and bottom lines should improve handsomely on a year-over-year basis in 2021, with more robust growth in the pair in 2022.

Many investors are still skittish on oil stocks given their pandemic dive, so Phillips 66 is cheap on an historical basis and has an attractive payout pushing it into high-yield dividend territory. The new distribution, which is to be handed out on Dec. 1 to shareholders of record as of Nov. 17, would yield nearly 4.6% on the most recent closing price.

Another emerging-from-the-pandemic recovery story is being told by Honeywell, one of the world's top industrial conglomerates. Active in nearly every corner of the sector, from aerospace to home goods, the company has numerous levers it can pull to get the growth train moving again.

It's done this successfully in recent times, a dynamic that's supporting the latest quarterly dividend boost. At the beginning of October, Honeywell declared a 5% increase in that payout to $0.98 per share.

We're just in front of the company's Q3 earnings release (scheduled for Friday, Oct. 22), so investors will be hoping for continued improvement in the fundamentals. It certainly has a fighting chance. In Q2, Honeywell -- similar to Microsoft -- notched sales growth in all of its reporting segments (four in total). The quartet also saw increases in their margins.

All in all, higher volumes and reduced costs helped the company improve both its top and bottom lines and its cash flow. Total sales rose a very encouraging 18% year over year to $8.8 billion, GAAP net profit rocketed 32% higher to $1.43 billion, and free cash flow gained 17% to land at nearly $1.5 billion.

Very encouragingly, Honeywell has raised its full-year guidance for 2021. It's now expecting a year-over-year sales increase of at least 4%, and it forecasts non-GAAP, per-share earnings will climb 12% higher, at a minimum.

Honeywell's upcoming payout will be dispensed on Dec. 3 to investors of record as of Nov. 12. At the latest closing stock price, it would yield 1.8%.