Electric automaker Rivian plans to launch one of the decade's biggest IPOs, which could raise over $8 billion. But despite the company's sleek trucks and SUVs, investors need to brace themselves for a stomach-churning ride.

Founded in 2009, Rivian launched its first vehicle – the R1T – in September. This five-passenger pickup tows up to 11,000 pounds, races from 0 to 60 mph in three seconds, and boasts a range of 314 miles. Rivian sells the R1 at a starting price of $67,500. Its optional accessories include a Camp Kitchen, with induction cooktops and a water tank for washing dishes, that slides out of from the side of the truck.

Rivian also plans to roll out its R1S, a seven-passenger SUV built on the R1T's battery and propulsion system, in December for $70,000. You can fold the R1S's seats for up to 105 cubic feet of cargo space. 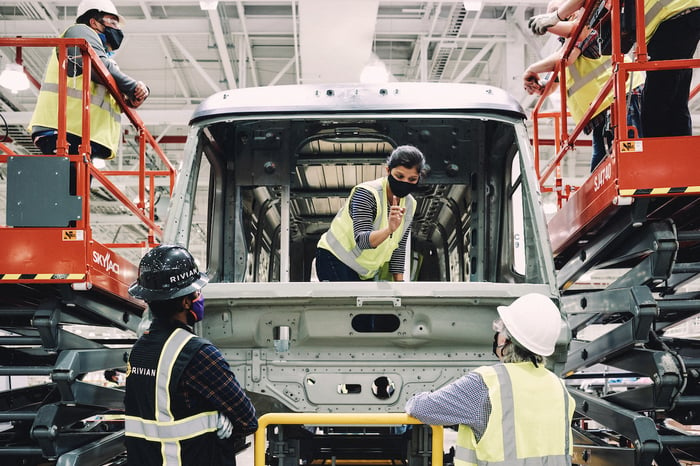 Both vehicles come with the Rivian Driver+ safety system, which has hands-free driving assistance and is updated periodically over-the-air. The platform includes 11 cameras, 12 ultrasonic sensors, five radars and a high-precision GPS antenna. This system generates substantial amounts of data, which improves the artificial intelligence.

Why is Rivian hot?

Like Tesla, Rivian does practically everything in-house: designing and building vehicles, financing and selling them through its own dealerships, teaming up with major insurers to offer its own auto insurance, maintaining vehicles' hardware and software, and even providing fleet management software for large business customers. By keeping all those operations under its own umbrella, Rivian estimates that each vehicle it sells will bring the company an additional $10,000 to $15,500 for software, $8,700 for insurance and financing, and $3,500 for vehicle service revenue over its lifetime -- all of which will likely sport higher margins and generate more profit than building and selling the vehicle in the first place.

But the most interesting part of the company is its commercial trucks, which are part of a collaboration with Amazon (NASDAQ:AMZN). The e-commerce giant invested $1.3 billion in Rivian and agreed to an initial order of 100,000 vehicles, with the first delivery beginning in December. Of these, Rivian expects to deliver up to 10,000 vehicles by 2022 and the rest by 2025. The contract prevents Amazon from purchasing anyone else's delivery vans for four years, and Rivian will need Amazon's consent to sell vehicles to other customers. If Amazon fails to order a total of 10,000 vehicles over two years of the deal, it will reimburse Rivian's development costs.

What's next for Rivian?

For the first half of this year, Rivian burned through $851 million in operating cash flows. But with $3.7 billion in cash on hand and the anticipated influx of capital from the IPO, the company should have enough financial resources to sustain itself for the next few years without taking on more debt or diluting investors.

Rivian faces other issues, though. Ford (NYSE:F), which is an investor in the company, plans to launch its own F-150 Lightning EV in the spring at a far cheaper $39,974 starting price. The F-150 Lightning's preorders hit 150,000 last month, and Ford is ramping up production.

Rivian shuns traditional advertising, relying on earned and shared media. Tesla proved this to be a winning strategy, but Rivian lacks a similarly charismatic leader to keep it in the spotlight. Founder and CEO R.J. Scaringe has attracted just 46,600 Twitter followers, compared to Tesla CEO Elon Musk's 60.9 million. Musk's antics, bravado, and stunts may seem cringeworthy, but he has transformed Tesla into a fast-growing automaker that has upended the industry. In contrast, Scaringe's relative obscurity bodes ill for his marketing strategy.

Even though the Amazon contract will be the main growth catalyst for Rivian, the relationship features risks. As Tesla and Nio, have discovered, manufacturing complex vehicles can be enormously challenging and prone to costly delays. Over the past year, Rivian delayed the R1T twice because of the COVID-19 pandemic. Now the company must navigate other hurdles like semiconductor shortages and supply chain disruptions that plagues the global auto industry.

For an IPO of its size, the Rivian deal is unusual. The company still hasn't brought in any revenue, and it depends heavily on a single customer, Amazon, that's also a major investor. Until investors can see that Rivian's got a handle on actually building cars, they may want to hold off on buying its shares.