Both of these companies have exciting futures.

We are heading right into the heart of earnings season for the third quarter. This is one of the four periods each calendar year when companies give material updates to their financial results, and they are crucial for investors in evaluating how their portfolios are doing.

The problem is, with thousands of companies reporting results each quarter, it is impossible to keep up with how every business is doing. As an investor, an underrated skill is to prospectively identify which reports you will read each earnings season, optimizing your research for finding long-term compounders while avoiding low-quality businesses. 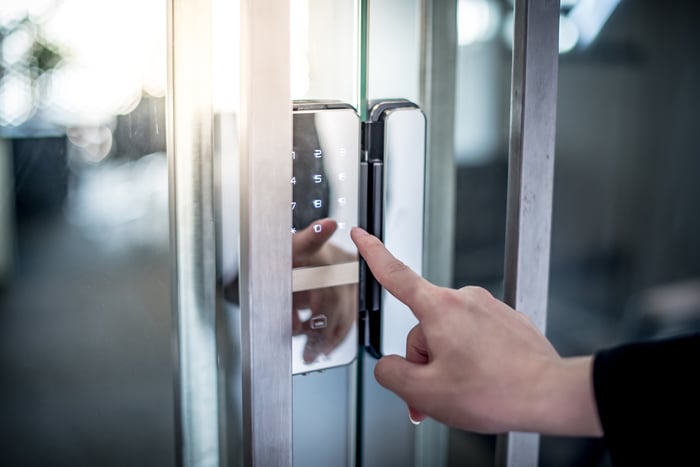 Latch is a recent entrant to the stock market, going public through a special purpose acquisition company (SPAC) this summer. The company sells hardware and software solutions to big apartment buildings around the world.

How does its business model work? Latch sells its smart doorknobs (what it calls hardware) in large contracts to apartment building owners, who install the systems on every locked door in the building -- like apartment units, fitness rooms, and mailrooms. It then bundles these doorknobs with subscriptions to its software program, which is used by building managers and tenants.

Residents get access to Latch's smartphone app, which enables easy access to their apartment units (replacing physical keys) and shared spaces within the building. Building managers use Latch's software to change who has access to what rooms, manage building security, and to optimize mail and other deliveries. According to Latch, building owners pay around $7 to $12 per unit per month to access Latch's software, depending on how many programs they want. Owners choose to pay Latch this much for these services because it helps them increase rent on luxury apartment units while also reducing expenses for the building manager.

In the second quarter of this year, Latch's first as a public company, it reported revenue of $9 million, up 227% year over year. While this may seem small relative to its market cap of $1.27 billion, it is because Latch's revenue is not recognized until a building is operational, which can take upward of five years or longer after it signs a contract with an owner. To get a better view into how many future units it has booked, Latch gives out total bookings each quarter as well as the cumulative units it has booked. In the second quarter, Latch had bookings of $95.8 million, up 102% year over year, with cumulative booked units hitting 451,000, up 108% year over year.

Since it has been public for only a little while, it will be interesting to see how much progress Latch has made this quarter converting its bookings into revenue, and that is why it is on my watch list heading into earnings season.

Roblox, like Latch, has been public for less than a year, but opted to hit the markets through a direct listing this spring. The company operates a platform that offers tools for video game developers to build interactive experiences for the tens of millions of daily active users (DAUs) on Roblox. To make money, it splits the sales of Robux, its in-game currency, with developers of these games. Its other big expenses are trust and safety, investments in improving the tools and connectivity of the platform, and fees paid to the mobile app stores.

In the second quarter, Roblox had 43.2 million DAUs, up 29% year over year, which drove bookings (the revenue equivalent for video games) to increase 35% to $665.5 million in the period. Even though Roblox continues investing for growth, the company is bringing in plenty of cash, generating $720 million in cash flow from operations over the last 12 months. Since Roblox is required to defer a lot of its revenue to future quarters even though it collects all the cash from Robux sales upfront, cash flow from operations is the best measure of profitability for this business. With a market cap of $44 billion, the stock's valuation seems rather reasonable when compared to its recent growth and cash flow generation.

So why isn't the share price higher? It all comes down to investor expectations for future quarters. Roblox got a huge jump in use from the pandemic last year with bookings growing over 200% year over year and users growing 95% in Q2 of 2020, and it is likely that a lot of investors think this was a one-time bump in growth that will slow down soon. Others, like myself, think it is more likely that Roblox has a long runway of growth ahead of it, no matter whether the pandemic ends today or five years from now.

Its third-quarter report will be another data point to see who is right in this debate, and that's why Roblox is a must-follow this earnings season.

What Went Wrong With Latch Stock?
420%