This unknown AI automation company could see incredible growth in the automation revolution.

When you think about investing in companies that are automating the world, UiPath (PATH) might come to mind, or maybe you recall Amazon's (AMZN 2.57%) warehouse robots. While both of these companies are helping automate the world, there is one company automating a critical necessity of every enterprise's everyday life.

BlackLine (BL 1.84%) has been working on automating the accounting industry for 20 years, attracting some of the world's most renowned companies, like PepsiCo (PEP 0.91%) and Mastercard (MA -0.14%). Here are three reasons why you should think about making BlackLine your next investment. 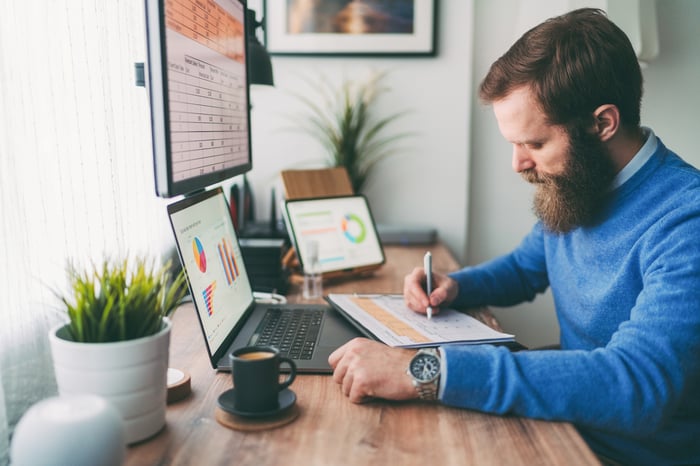 BlackLine wants to completely transform how accounting departments operate by bringing solutions to the workplace that increase efficiency and accuracy. One way it does this is by automating labor-intensive, low-thinking operations. An accountant's time can be better spent working on something complex rather than something mundane but time-consuming.

The company's wide offerings even include intercompany accounting for parent organizations. BlackLine's product line up, made up of both automated and manual solutions, along with its ability to automate 85% of a company's manual activity has allowed the business to attract some big-name customers. Nearly 50% of the Fortune 500 and 50% of the Fortune 50 are BlackLine customers. With 3,600 customers in 13 different countries, BlackLine has become a runaway leader in its market according to Gartner's (NYSE: IT) Magic Quadrant.

As the market leader, the company has been able to maintain impressive margins: In Q2 2021, the company reported a gross margin of 80%, an operating margin of 8%, and a free cash flow margin of 16%. Q2 2021 revenue reached $102 million, growing 23% from the year-ago quarter. The company's loyal customer base is helping with this -- spending 6% more today than it did one year ago -- while customer churn was just 2%.

The company has generated nearly $32 million in free cash flow so far this year, and while it isn't profitable -- losing $25 million in Q2 2021 -- its non-GAAP net income reached roughly $10 million. The GAAP loss was due mostly to stock-based compensation and a large interest expense.

The company faces competition from companies like Workiva (WK -0.24%), a compliance company, and UiPath, but no major competitor directly focuses on the accounting space as BlackLine does. Even if a competitor were to arise, it would be unlikely to take BlackLine's customers away because of the company's low customer churn.

Even as the market leader, the company has a 6% market share or less in three of its top solutions, and with a just 1.4% penetration of its $28 billion total addressable market, the company still has an immense opportunity ahead. At an appealing valuation, this under-the-radar stock could prove to be a huge winner over the next 10 years as automation transforms businesses, and you could take advantage of that by giving BlackLine the green light to join your portfolio today.

Here's My Favorite Stock That No One's Ever Heard Of
395%