There's no contest between the stock performances of Novavax (NASDAQ:NVAX) and Ocugen (NASDAQ:OCGN) so far this year. Ocugen's share price has skyrocketed roughly seven times more than Novavax's has.

Does that make Ocugen the smarter vaccine stock to buy right now? Not at all. Here are seven reasons why Novavax stock is a no-brainer pick over Ocugen. 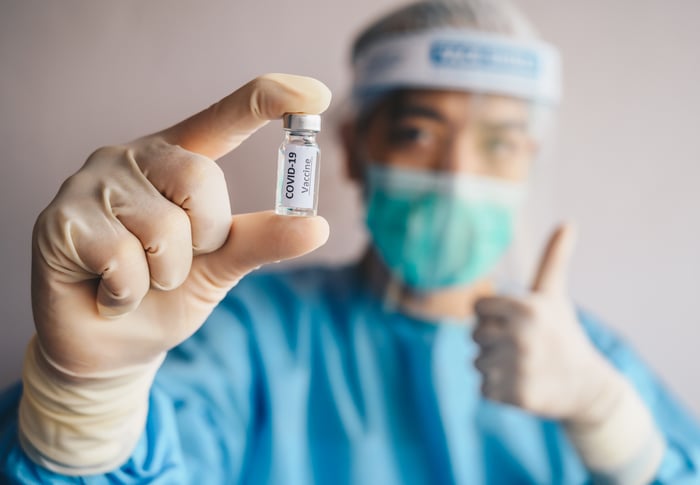 Ocugen's share price skyrocketed more than 750% year to date twice in 2021. But much of that massive gain evaporated after the company disclosed in June that it would no longer pursue Emergency Use Authorization (EUA) in the U.S. for COVID-19 vaccine Covaxin.

The company opted to go for full approval once the U.S. Food and Drug Administration limited which vaccines would be reviewed under the EUA program. So far, however, Ocugen hasn't begun the late-stage clinical studies that will be required to win full FDA approval.

Meanwhile, Novavax still has U.S. EUA for its COVID-19 vaccine candidate NVX-CoV2373 as a top priority. The company will be later than it hoped in filing for authorization in the U.S. However, it has the potential to launch in the U.S. much sooner than Ocugen could.

Ocugen still hopes to obtain authorization for Covaxin in Canada. But the U.S. stands as the big prize. And it's a prize for which Novavax clearly has a better opportunity right now.

Some investors focus entirely on the approval or authorization process for COVID-19 vaccines. Without supply agreements in place with at least one country, though, any regulatory wins will be hollow victories.

Ocugen doesn't have any supply deals finalized yet. Novavax, on the other hand, already has supply deals in place with the U.S., Canada, the EU, Australia, New Zealand, Japan (through its partner, Takeda), and Gavi, the Vaccine Alliance.

3. Full rights to its COVID-19 vaccine

Ocugen secured commercialization rights from Bharat Biotech for Covaxin only in the U.S. and Canada. Its terms with Bharat allow the company to keep 45% of the profits from any sales of the COVID-19 vaccine in those two markets.

Novavax developed NVX-CoV2373 on its own. It retains full rights to the vaccine, although it has partnered with other organizations to target some markets.

Other than Covaxin, Ocugen doesn't have any other pipeline candidates currently in clinical testing. The company has stated that it plans to advance experimental gene therapy OCU400 into two phase 1/2a clinical trials in 2021, but those studies haven't begun yet.

Novavax has already reported positive results from a phase 3 study of flu vaccine candidate NanoFlu. It kicked off a phase 1/2 study evaluating a combination of NVX-CoV2373 and NanoFlu in September. The company also has two other clinical-stage candidates -- respiratory syncytial virus vaccine ResVax and an Ebola virus vaccine.

Cash is extremely important to clinical-stage biotechs. Without enough cash, they can be forced to raise capital to fund operations and expensive clinical trials through dilutive stock offerings.

Ocugen really has only one solid potential near-term catalyst: It's awaiting a decision by Health Canada on the authorization of Covaxin. Any wins for the vaccine outside of Canada or the U.S. benefit Bharat but not Ocugen.

What about Novavax? The company hopes to soon win EUAs in India, Indonesia, and the Philippines. Novavax is awaiting Emergency Use Listing from the World Health Organization for NVX-CoV2373. It's also moving toward regulatory filings in the U.K., Europe, Australia, Canada, New Zealand, and the U.S.

Ocugen's impressive performance so far this year has stemmed in large part from the combination of intense online interest and a large number of shares sold short. This makes the stock a good candidate for a short squeeze. But the company's market cap tops $1.6 billion with analysts expecting Ocugen to only generate around $135 million in revenue next year.

Novavax, though, could soon see big bucks flowing in if it wins authorizations and approvals for NVX-CoV2373. The company's market cap stands near $12.4 billion. However, with anticipated revenue of $5.5 billion in 2022, that valuation is much more defensible than Ocugen's is.