Netflix (NASDAQ:NFLX) just reported its highly anticipated Q3 financial results, and it was largely a positive print. Revenue grew 16% year over year, while operating income jumped 33%, compared to the third quarter of 2020. The stock, however, was down as much as 3% following the news.

Don't pay too much attention to Wall Street's short-term reaction. Now might be a great time to buy shares in this streaming-entertainment pioneer. 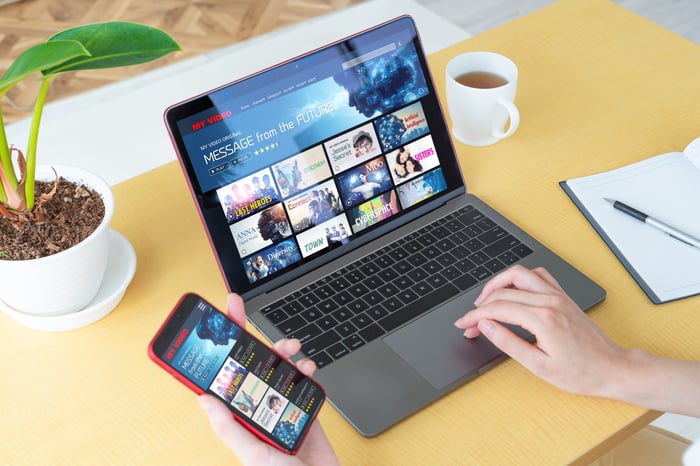 During the three-month period that ended Sept. 30, Netflix added a total of 4.4 million new members. This exceeded management's guidance of 3.5 million additions, as well as the consensus analyst forecast of 3.9 million. Since the company's success is predicated on gaining new customers, it's a positive sign to see a strong showing in the most recent quarter.

This mega-cap business now has more than 213 million total accounts, making it the biggest player in the streaming market. Nearly all of the new customers in the most recent quarter came from international markets, supporting Netflix's goal to become a global media empire. As things stand today, 57% of the company's sales are derived outside the UCAN (U.S. and Canada) region, a figure that should trend higher as Netflix continues to expand its overseas subscriber numbers rapidly.

With heavier competition in the space battling it out for our attention, shareholders unsurprisingly were worried that Netflix's ability to continue adding new members was coming to an end. This doesn't appear to be the case. Management expects Netflix to add 8.5 million subscribers in Q4, which is in line with what the business did in the fourth quarters of 2018, 2019, and 2020. This hopefully eases any concerns that investors previously had.

Thanks to Netflix's core competency of creating incredibly successful content, customers who are not from the home country where a series was produced still become massive fans. A perfect example is the recent smash hit Squid Game, a Korean local-language series that's now Netflix's most successful show ever. An incredible 142 million membership households watched it in the first 28 days.

What's more, Netflix tied a 47-year old record by receiving 44 wins at the Emmy's in September. While having a $17 billion content budget this year certainly helped, the skill and aptitude required to know what makes for compelling content and what doesn't takes time. With COVID-related production shutdowns now a thing of the past, the business is expecting a more normalized content slate for 2022.

The company is testing games in a few countries today. And to be clear, the offering will come at no additional cost to existing subscribers. Netflix's overarching strategy is to expand the value for customers and drive higher levels of engagement.

According to Nielsen data, streaming takes up 28% of TV time in the U.S. Netflix accounts for 6%, which is tied with Alphabet's YouTube video service. And traditional cable-TV still takes the lion's share at 38%. Given that the U.S. is ahead of the rest of the world when it comes to streaming penetration, this bodes extremely well for Netflix's long-term growth outlook as consumers increasingly cut the cord and ditch their cable subscriptions.

Fueling this growth is management's willingness to introduce different types of memberships in various markets. For example, in Q3, a free mobile-only plan was launched in Kenya with the hopes to bring on more paying customers. This was after Netflix brought a low-cost mobile-only plan to 78 countries in Southeast Asia and sub-Saharan Africa in the second quarter. Attracting more members in this manner is revenue-neutral for Netflix and acts as a customer-acquisition tool.

CFO Spence Neumann highlighted Netflix's huge ambitions: "So we think we have a super long runway here to address those, you know, upwards of 1 billion, you know, pay-TV households or broadband households, however, you measure it, around the world." Approaching just half of that mark would be extraordinary.

Over the past 12 months, Netflix's stock has trailed the performance of the S&P 500, returning 18%, compared to the broader index's 32% gain. And the company's price-to-earnings ratio of 65 is the lowest it's been in five years. In addition to the comments I made above, these two points make a valid argument that this perennial market beater's days of outperformance are far from over.

Netflix's latest quarter proved that the business is humming along. This stock can be a wonderful addition to any portfolio.