Shares of surgery and healthcare technologist Intuitive Surgical (ISRG -1.66%) are on a tear. The stock is up 25% so far in 2021, and over 80% over the last two-year stretch. Since the company released its third-quarter 2021 report, shares have been re-approaching all-time highs last reached in September 2021, so it's clear that investors remain optimistic about Intuitive's prospects.

However, after such an epic run, is it too late to add Intuitive Surgical stock to your portfolio? If long-term growth is what you're after, this proven winner in the healthcare space is still certainly worth considering. 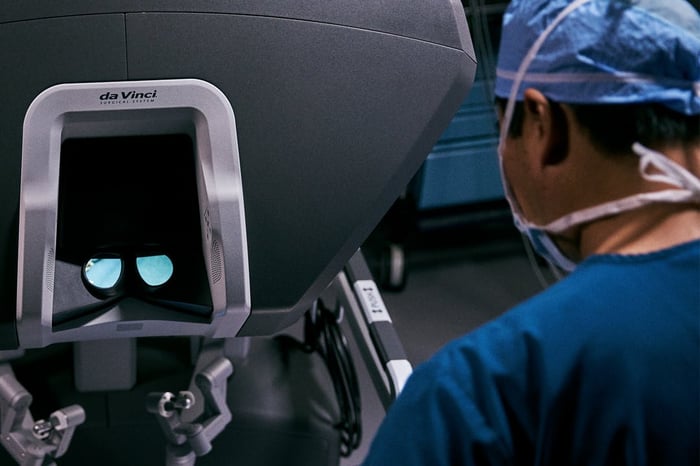 Q3 2021 revenue was up 30% from a year ago to $1.4 billion. This sales growth represents a rebound from last year's results during the early stages of the pandemic, when many elective surgeries weren't happening. Compared to Q3 2019, the compound average annual growth was only 12%, reflecting the year-over-year decline in 2020.

So why the big stock advance? Intuitive Surgical is reaching a more efficient scale. Though sales growth has averaged only low double-digit percentages since 2019, free cash flow is up 70% since the start of 2019. When the company releases its 10-Q filing for Q3, I expect to see another big double-digit year-over-year increase in this profitability metric.

All of this comes despite ongoing disruption from the pandemic. In some markets, elective surgeries are still on hold because of the Delta variant. Intuitive is also seeing a higher rate of its da Vinci robots being leased by customers. 41% of da Vinci robot placements in Q3 were done on leasing terms, compared to just 35% last year. The resulting mix means lower revenue upfront compared to a higher mix of outright purchases, but the metric to focus on is the da Vinci robot total installed base. At the end of Q3, the total number of da Vinci systems installed in hospitals and surgery centers was up 11% year-over-year to 6,525.

Paired with a higher utilization rate of the installed base (the compounded annual utilization growth rate between the third quarters of 2019 and 2021 was 3%), Intuitive's ongoing sale of instruments, accessories, and services will directly benefit.

A fantastic bet on healthcare digitization

More than two decades into its development of robotic-assisted surgery, Intuitive's management said that its da Vinci X and Xi models now have over 70 clinical uses, ranging from general procedures to specialty uses like transoral surgery. Tens of thousands of surgeons use da Vinci multiport systems worldwide, and the single-port system (dubbed da Vinci SP) is still early on in deployment, with just 89 in use in the U.S. and South Korea. The same goes for the new Ion machine used for lung biopsies, with only 98 units placed so far.

Intuitive has plenty of room to continue expanding its reach in the next decade. And beyond surgery, Intuitive is only just beginning to flex its power as an agent for digital change among surgery centers and hospitals. The company acquired small firm Orpheus Medical last year to build on this front. Intuitive's capabilities already include virtual reality training, hospital operations efficiency insights, surgery procedure outcome analysis, and machine learning for scientific discovery. Services revenue represented just 17% of total revenue in Q3, but is snowballing quickly as the da Vinci installed base expands.

As of this writing, Intuitive Surgical trades for a premium 72 times trailing 12-month free cash flow. But given the steady rate of sales growth and even faster increases of the bottom line, it isn't an unreasonable price tag. The massive healthcare industry is still ripe for disruption here and abroad, and Intuitive will also get a further upward lift as the effects of the pandemic continue to ease. There's no shortage of opportunity for this company to continue building on its leading position as a surgery equipment technologist. I remain an optimistic buyer for the long term.

This Industry Titan Is Buying Back Its Stock Hand Over Fist. Should Investors Follow?