There's risk, but a lot of potential.

You may have overlooked Casper Sleep (CSPR) as an investment. After all, it has a small market cap of only $182 million, and it's gone to penny stock status. Shares trade at $4.62 as of this writing, or about a third of the IPO (initial public offering) price.

However, beneath the surface lurks a well-run, growing company with problems as well as potential. And at this price, it might be worth a second look. 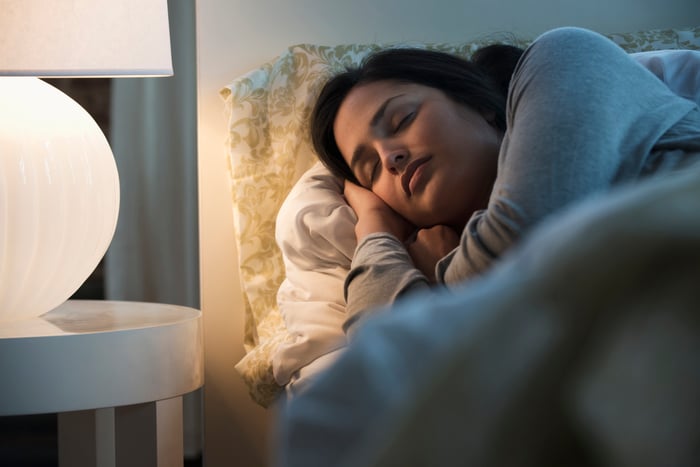 Don't sleep through this

Casper is one of several companies that make mattress technology products, offering the chance for a highly pleasurable sleep experience in exchange for your cash and confidence. It's been around since 2014, but it went public in 2020. It calls itself "the world's first sleep brand." It operates through its own network of 72 direct channel stores, as well as partnerships with companies such as Target and Nordstrom.

The company sees a $432 total market opportunity in the sleep wellness category, and a $79 billion U.S. addressable market, with $14 billion of mattresses sold annually in the U.S. It has 3% of the U.S. mattress market, and to capture greater market share it produces a number of mattress options, including two new models released in 2021. Casper has already moved beyond mattresses into items such as pillows and bedding to expand its reach, and it has a collection of 55 products available online or in stores.

Casper posted just under $500 million in 2020 revenue, which was a disappointing 13% year-over-year increase. 2021 has been a bit better, with second-quarter global sales increasing 37%, to a record $150 million. That was particularly pronounced in its retail partnership segment, which increased 79% year over year. Casper recently struck up a deal with beleaguered retailer Bed, Bath & Beyond, which expands its reach in this area. And although it made strides in its gross profit, which increased 27% for a 48% gross margin, net loss increased by $10 million to $34 million.

Challenges on the way to dreamland

Sleep wellness is a competitive space that includes the older standards like Tempur Sealy International, maker of Sealy, Tempur-Pedic, and Stearns & Foster brands, and Sleep Number, as well as newer companies like Casper and Purple Innovation. All of these companies are putting out advanced sleep products that aren't too different from each other, although they have different features.

Growth had been slowing prior to the pandemic, which made the timing of the IPO interesting, and it's perhaps not incredibly surprising that it didn't go too well.

Into 2021, like many other retail manufacturers, Casper is dealing with supply chain disruptions and inflation. That may may make it harder to stay on track to grow sales and progress on its path toward profitability.

Casper isn't demonstrating signs of a strongly differentiated model with a wide moat and soaring sales. What it does have, though, is strong name recognition, an expanding product line, and developing partnerships. And here's the thing: The stock is super cheap, not just because shares are below $5. At the current price, they trade for less than one time trailing-12-month sales. Even with its net loss and supply chain problems, it's hard to justify this low price -- which means that it should rise.

The bottom line is, Casper is a good company dealing with short-term issues, and the market isn't giving it its fair value, which spells opportunity. I'll add the caveat that this stock comes with risk, since the market isn't necessarily rational. Over time, Casper could be a monster investment, and at this price, investors might want to consider buying shares.

The Fall and Rise of Casper Sleep Stock
420%