SoftBank's (OTC:SFTB.Y) Vision Fund owned a 37% stake in Coupang (NYSE:CPNG) at the time of its IPO in March. The Japanese conglomerate's investment arm had accumulated that massive stake in the South Korean e-commerce leader over the previous six years.

SoftBank's investment initially seemed to pay off. Coupang's stock opened at $63.50 per share on its first day of trading, far above its IPO price of $35, and hit an intraday high of $69 before closing at $49.25. However, the stock subsequently slid below its IPO price amid concerns about its post-pandemic slowdown, ongoing losses, and murky expansion plans.

Today, Coupang's stock trades in the high $20s, but remains a divisive investment. Last month, SoftBank sold a whopping 57 million shares of Coupang at an average price of $29.69 per share for total proceeds of $1.69 billion. SoftBank still owns 568.2 million shares following the sale, but that massive divestment at a 15% discount to its IPO price should raise some bright red flags. 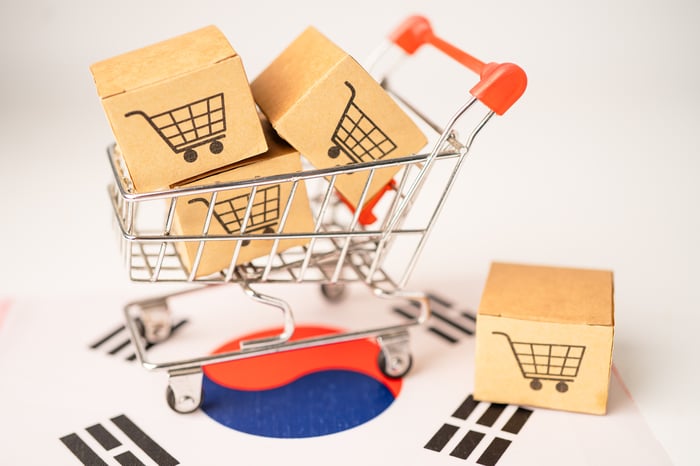 Let's see why SoftBank sold so many shares of Coupang, if those sales indicate the stock is becoming a risky investment, and if investors should expect SoftBank to continue selling additional shares in the future.

Why did SoftBank sell $1.7 billion in Coupang shares?

On June 30, SoftBank's investment in Coupang was still worth 8.7 times its original value. But here's how Coupang's stock has fared since then: 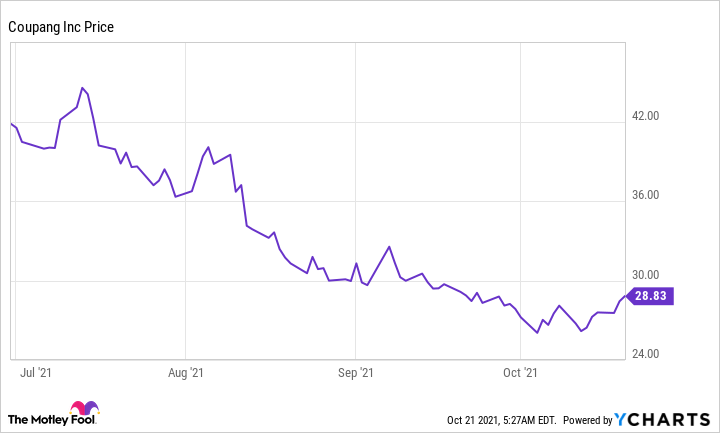 That steep decline likely forced SoftBank to lock in some of its gains. However, SoftBank's remaining stake indicates it hasn't given up on Coupang yet.

SoftBank also likely took some profits in Coupang to offset the losses from its other troubled investments. Those losers include Greensill Capital, a British supply chain finance start-up that collapsed in March; DiDi Global, China's top ride-hailing provider, which was derailed by a government crackdown shortly after its IPO in June; and its remaining stake in Alibaba, which was slammed by an antitrust probe and a record fine.

A series of negative headlines about Coupang -- including a warehouse fire, protests regarding its working conditions, and its founder's hasty decision to relinquish his domestic posts to focus on the company's overseas expansion -- might also have influenced SoftBank's decision to sell.

Will SoftBank continue to sell its stake in Coupang?

Coupang's revenue rose 93% to $12.1 billion in 2020, and analysts expect its revenue to increase another 57% to $19 billion this year. Those are high growth rates for a stock that trades at just 2.6 times this year's sales.

However, Coupang's stock is cheap because it still faces a lot of uncertain challenges. It remains deeply unprofitable, and it continues to expand its ecosystem in South Korea with capital-intensive services like expedited shipping, grocery and restaurant deliveries, and even streaming videos.

It's already the market leader in South Korea, but it's unclear if its overseas expansion plans for Taiwan, Japan, and Southeast Asia will pay off -- especially when all of those markets are all dominated by other companies.

Coupang's future might seem murky, but its stock also seems too cheap to sell right now. It's easy to see why SoftBank would want to take some profits after reaping some massive gains from Coupang over the past six years, but I doubt it will liquidate the rest of its position before seeing how the company's ambitious domestic and overseas expansion plans pan out.