Shares of Ionis Pharmaceuticals (NASDAQ:IONS), a biotechnology company, have fallen around 13.6% since their closing price on Friday, Oct. 15, 2021. Investors were disappointed by phase 3 clinical trial results for tofersen, an experimental treatment for amyotrophic lateral sclerosis. 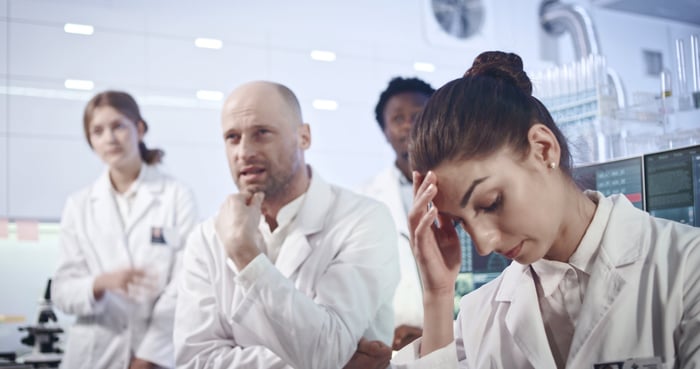 Treatment with tofersen lowered SOD1 protein levels, but this didn't lead to improved scores on the revised amyotrophic lateral sclerosis functional rating scale. The losses would have been much worse for Ionis Pharmaceuticals, but tofersen is being developed in a partnership with Biogen (NASDAQ:BIIB). The big biotech sponsored the failed study, so the losses to Ionis Pharmaceuticals' reputation were more severe than the financial setback.

This was the second big clinical trial flop for Ionis Pharmaceuticals this year. In March, the biotech stock plummeted after a Huntington's disease drug developed in a partnership with Roche (OTC:RHHBY) met an untimely end.