Looking for investments that genuinely make the world a better place is a great starting point for new investors. Nevertheless, as grand as a company's vision for the future may look, it ultimately needs to prove itself to be operationally and financially sound.

Consider how vital the internet is today. Life would be unrecognizable to most without it. But how many companies failed along the way, trying to incorporate the web into their business plans?

I bring this up as a way to introduce you to AppHarvest (NASDAQ:APPH), a specialist in controlled environment agriculture (CEA). Undoubtedly, safe and sustainable food production will be necessary for future generations, especially with an ever-growing population.

So the question is: Will AppHarvest prove to be one of the first successful companies in its space, or end up being an agricultural version of the dot-bombs? 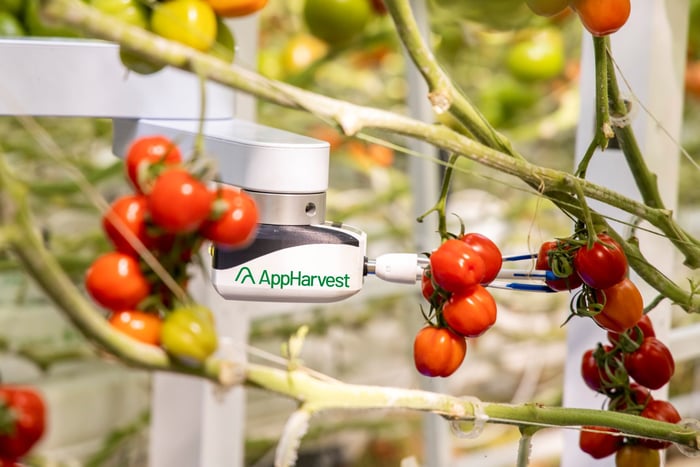 TechCo and its turnkey solutions

Announcing AppHarvest 2.0, management detailed a restructuring for the company, which would divide it into three decentralized segments: AppalachiaCo, GrowCo, and TechCo. Appropriately named AppalachiaCo will focus on AppHarvest's wholly-owned CEA operations in the Appalachian region. Meanwhile, GrowCo will be made up of CEA opportunities outside of the company's core region, focusing more on creating meaningful partnerships and potential joint ventures.

As for TechCo, it is a bit of a standout as it breaks from AppHarvest's history of operating CEA facilities and learning how to churn out produce sustainably. Essentially offering a start-up shop for CEA operations, TechCo aims to deliver turnkey solutions to optimize farms worldwide. This is a fascinating development for investors as it removes some of the commodity-pricing concerns from AppHarvest's core business and provides a potentially high-margin solutions segment.

Ranging from artificial-intelligence (AI) solutions for growing its produce to robotics for packing and harvesting, TechCo offers a simple turnkey solution to customers that could provide a solid return to investors rather than trying to run entire farms on its own.

While it is far too early to make accurate estimations, management is guiding for 75% gross margins and $40 million to $50 million in sales from TechCo by 2025. Compared to its current guidance of $7 million to $9 million in sales for the entire company in 2021, this high-margin revenue could help the company with its long-term viability, possibly adding much-needed cash flow.

With its goal of developing 12 facilities by 2025, AppHarvest hopes to begin realizing some large-scale efficiencies as it begins to streamline its operations. The company's Project New Leaf aims to discover over $40 million in annual cost savings, leaning on the efficiencies received thanks to scaling from one farm to 12 farms and continuing to roll out tech and robotic solutions.

While 12 farms by 2025 and their potential cost savings and efficiencies will give investors some crucial information to watch for in upcoming earnings calls, it could be even more crucial to future AppHarvest customers. Ultimately, these 12 farms could act as a proof of concept for other companies considering a future in CEA facilities.

Should AppHarvest miss on its goals of reaching an adjusted EBITDA of $115 million to $130 million by 2025, it could at least prove out portions of its CEA facilities and its technology solutions within them. In addition, establishing that its tech solutions are scalable could begin paving the way toward reaching a broader customer base of sustainability-focused firms and funds.

Short squeeze potential, but not for everyone

Due to the disappointment from lower sales in the second quarter and the generally highly speculative nature of the company, 16% of AppHarvest's outstanding shares are held short. Short-selling shares is a way to bet on a stock's price to decline, but it's a risky trade to make as the downside potential of doing so is theoretically infinite.

While I tend not to focus on a company's short percentage, it is of note in AppHarvest's case as the stock's decline of almost 90% from its all-time high has baked in too much negativity regarding its long-term outlook.

Ultimately, over $300 billion worth of crops are sold by farmers globally every year. Should AppHarvest and its market capitalization (or company price tag) of around $600 million carve out even a fraction of a percent from this $300 billion, it could provide huge returns to risk-tolerant investors.