The Chinese electric vehicle maker has plans to take flight.

The Chinese electric vehicle company plans to roll out a flying car that is also roadworthy, but it also made a few down-to-earth announcements.

HT Aero, an affiliate backed by XPeng and its founder He Xiaopeng, showcased a flying car at XPeng's annual Tech Day event on Sunday. While the car is not yet available to consumers, the company said it has plans to mass-produce the car and make it available to customers by 2024. The price is currently expected to be 1 million Chinese yuan (roughly $157,000). 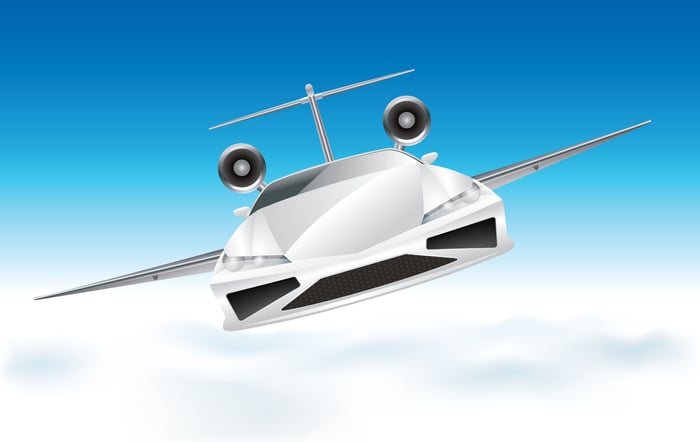 The vehicle is expected to have rotors that will fold away for storage when driving on land. When extended, they allow the car to take flight. This is the sixth prototype of the vehicle, which XPeng says has completed more than 15,000 safe test flights during the past eight years.

Not all the announcements were pie in the sky. XPeng also said it plans to continue to build out its network of charging stations. The company is planning to introduce the next generation of its X-Power supercharger, which will charge a vehicle for driving of up to 200 kilometers (roughly 124 miles) within about five minutes. XPeng also plans to launch a lightweight supercharger with similar capabilities.

It's important to note that many of these innovations are still in the developmental stages and not yet ready for prime time.

That said, investors can look to XPeng's recent operating and financial results for inspiration. In the second quarter, year over year, the company's vehicle deliveries reached 17,398, up 439%, while revenue of $582.5 million surged 537%. As with many early-stage start-ups, XPeng is still losing money, though the company cut its operating loss by half, so its results are moving in the right direction.

Its recent performance offers a far better reason to own the stock than the potential for a flying car -- as cool as that might be.

Why Shares of XPeng Are Driving Higher Today
397%