This company is creating spending cards in partnership with Coinbase and other crypto-related companies.

Marqeta (MQ -1.38%) last week disclosed some interesting news: It said it will work with several cryptocurrency related companies, including Shakepay, Fold, and Coinbase, to creating Visa cards that allow users to spend their cryptocurrency everywhere Visa is accepted.

This move is huge, boosting Marqeta's platform, which has already formed partnerships with Affirm, DoorDash, Instacart, and Square. This is also big news for cryptocurrency owners, creating another way for them to spend their cryptocurrency in the same way they spend traditional money. 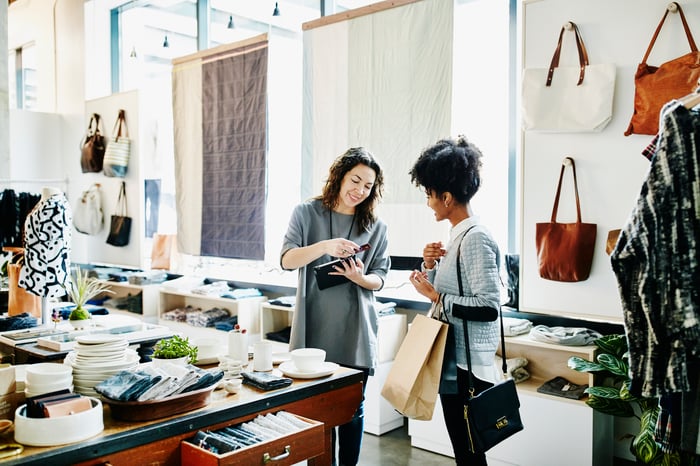 Among other things, Marqeta creates customizable spending cards for any number of companies, like those mentioned above, as well as for more established players like Goldman Sachs and Alphabet's Google. The company has an impressive lineup of partners that have turned to it because of how it has revolutionized spending cards.

Companies turn to Marqeta because it can make cards in a fraction of the time it takes traditional card issuers. Not only that, but Marqeta's products can help cut down on fraudulent transactions because of what are known as dynamic spend controls. This feature gives Marqeta's partner companies the ability to put spending constraints on cards that can limit transactions to certain vendors, certain dollar amounts, or to specific locations.

Those feature are proving to be critical in the cryptocurrency ecosystem, which is still working to make routine purchases of products and services as easy as traditional currency.

"Coinbase set out to allow our customers to seamlessly spend cryptocurrency anywhere, and Marqeta enabled us to turn our vision of a crypto-backed debit card into reality," Muneeb Imtiaz, the product manager leading the card segment at Coinbase, said in a statement.

A huge addressable market for spending cards -- which Crypto could amplify

Marqeta generates revenue from things like interchange fees, processing fees, and other fees when its cards are swiped, and gets other income from creating and shipping physical cards to customers. Through the first six months of 2020, the company reported net revenue of $230 million, a 95% increase from last year, and gross profit of $97 million. Meanwhile, its total processing volume was $50.5 billion in the first six months of this year, up from $24 billion last year.

Investors may be concerned about Marqeta's growing losses. In the second quarter, the company posted a net loss of $68.6 million, which compares to a loss of $7.1 million in the same quarter last year. Chief Financial Officer Tripp Faix said the loss growth "was largely driven by compensation-related costs to invest back into the business to support future growth."

During the quarter, stock-based employee compensation expense amounted to $55.5 million -- largely a result of the company's initial public offering in June. While the company posted a larger loss compared to last year, it is well-funded with $1.7 billion in cash and cash equivalents -- $1.3 billion of which was raised from its IPO, which should cover losses in the coming periods as it continues to expand and build its operation.

During its second-quarter earnings call, Chief Executive Officer Jason Gardner said that the global payments market is $74 trillion -- with $30 trillion of this amount related to cards. In the first half of 2021, Marqeta processed $50 billion in transactions, and it's on pace for about $100 billion this year, which is still a fraction of the market. Meanwhile, customer demand for crypto-linked cards is growing. Visa, which has released several crypto-linked cards with other partners earlier this year, reported $1 billion in spending on these cards during the first half of 2021.

Marqeta's foray into cryptocurrency spending cards is another big step for the young company, and the move helps it jump into what is sure to be a growing share of the payments processing market. This, coupled with its impressive roster of clients, makes it hard for me not to be excited about the innovative payments company.