The South Korean e-commerce giant has slumped below its IPO price.

Coupang (CPNG -1.38%) has been a frustrating stock to own since its IPO. The South Korean e-commerce stock went public at $35 this March, started trading at $63.50, and hit its all-time high of $69 that same day.

But today, Coupang's stock trades nearly 20% below its IPO price. Concerns about its decelerating post-pandemic growth, lack of profits, and its saturation of the South Korean market caused the stock to lose its luster.

SoftBank (SFTB.Y -1.73%), which owned 37% of Coupang at the time of its public debut, also exacerbated that pressure by selling $1.69 billion in shares at a 15% discount to its IPO price last month. Does that sell off indicate it's time for investors to abandon Coupang's sluggish stock? Let's examine three reasons to buy the stock -- as well as one reason to sell it -- to decide. 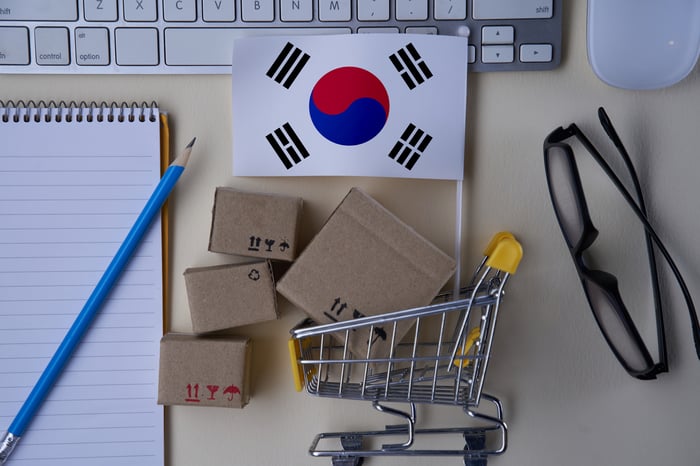 1. It still has room to grow in South Korea

Coupang pulled ahead of Gmarket by aggressively expanding its logistics network. Today, roughly 70% of South Korea's population lives within seven miles of one of Coupang's logistics centers -- which makes it easy for its Rocket Delivery service to fulfill most orders within a single day.

Coupang served 17 million active customers at the end of the second quarter, up 26% from a year earlier. That's nearly a third of South Korea's total population of 52 million, but Coupang could still pull more shoppers away from its smaller competitors and brick-and-mortar retailers.

Coupang plans to lock in its customers, boost its revenue per customer, and widen its moat by expanding its ecosystem.

Coupang hasn't disclosed its exact subscriber numbers for WOW yet. But back in May, CEO Bom Kim said its WOW members purchased products at a "significantly higher frequency and across more categories than non-WOW members." Kim also said that Coupang was continuously testing out "dozens of services of new experiments" to expand that ecosystem.

Coupang continues to grow like a weed. Its revenue rose 93% in 2020 as it benefited from the same stay-at-home tailwinds throughout the pandemic, and grew another 73% year-over-year in the first half of 2021.

Analysts expect Coupang's revenue to increase 57% this year and 40% next year. Based on those forecasts, its stock trades at less than two times next year's sales, which seems irrationally cheap relative to its growth.

The one reason to sell Coupang: its overseas expansion plans

Coupang is still generating plenty of growth in South Korea, where its average revenue per customer rose 36% year-over-year in the second quarter.

But it also realizes it's saturating its home market and needs to gain more overseas users. That's why it recently took baby steps into Japan, Taiwan, and Southeast Asia. However, I'm not too confident in these plans because each of those regions is dominated by entrenched leaders.

Amazon and Rakuten dominate the Japanese e-commerce market, while Sea's Shopee is the clear leader in Taiwan and Southeast Asia. If Coupang plans to challenge those leaders by building new logistics centers, as it did in South Korea, those efforts could be very expensive -- but bear very little fruit.

Do Coupang's strengths outweigh its weaknesses?

I believe Coupang will continue to widen its lead against its rivals in South Korea as its ecosystem expands. But those efforts will be costly, and I'm not convinced its expansion plans beyond South Korea will work.

That said, I believe Coupang's stock is still too cheap to ignore at these levels. The stock might not generate massive gains like Amazon or Sea, but I think it could easily double or triple if it continues to grow in South Korea. If it defies my expectations and successfully gains ground in other Asian markets, its stock could generate even bigger multibagger gains over the long term.