The company is hoping good operating performance in Q3 will reduce focus on poor corporate practices.

Gaming company Activision Blizzard (ATVI 1.34%) is scheduled to report third-quarter earnings on Nov. 2. The company experienced negative publicity regarding its corporate culture near the end of July. The California Department of Fair Employment and Housing sued Activision Blizzard suggesting sexual harassment of female employees and discrimination against women regarding promotions and pay. Management is hoping to turn investor attention to financial results instead.

At the pandemic onset, Activision Blizzard saw a surge in engagement from consumers who were staying home more often than usual. Impressively, video gaming engagement has remained high, even as economies are reopening worldwide. 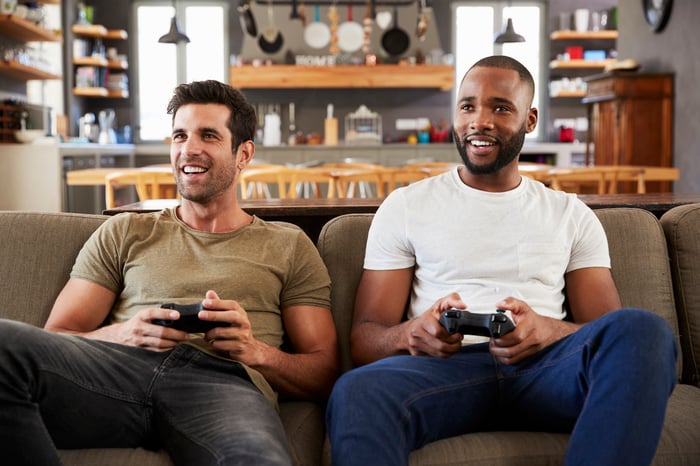 Importantly, Activision Blizzard makes games that gamers can play on personal computers, gaming consoles, and mobile devices. The company is home to popular titles like Call of Duty, World of Warcraft, and Candy Crush. Unsurprisingly, people have spent more time playing games since the pandemic onset. If you are spending more time at home, that creates more opportunities to engage with your devices that have games on them.

As a result, revenue surged in fiscal 2020, rising by 24.6% from the year before. More impressively, the company is growing revenue in the first two quarters of fiscal 2021 on top of the higher levels from 2020. So far this year, revenue is up by 23% from the same period last year.

The company generates revenue from a mix of in-game sales of content, advertising, and sales of games. All three sources are growing nicely, but product sales, which include physical copies of games, are lagging behind the others (6.5% in the second quarter). The segment accounted for $568 million of the company's $2.3 billion in sales in its most recent quarter.

One reason sales are growing more slowly for the segment is supply shortages of the next generation of gaming consoles. As more individuals get their hands on these highly sought-after consoles, they will look to buy games to play on them.

Analysts on Wall Street expect Activision Blizzard to report revenue of $1.88 billion and earnings per share (EPS) of $0.70. The revenue estimate is an 11.1% increase from the same quarter last year, while the EPS estimate nearly matches the $0.71 of Q3 last year.

Interestingly, management estimated it would report revenue of $1.97 billion in Q3 and EPS of $0.64. So analysts are estimating the company will generate higher earnings on lower revenue compared to management forecasts.

Activision Blizzard's stock is down 12.8% so far in 2021, with the bulk of the fall coming after July when the company faced complaints and lawsuits about its corporate practices and mistreatment of employees. The company is taking steps to address the issue by hiring an outside law firm to conduct an audit of its practices and notify the company on how it can improve. However, as much as company management would like to shift attention to its financial results, the issue remains a top concern.