One is diversifying, and the other is downsizing.

In my view, investors should probably avoid buying shares of Sundial Growers (SNDL 5.50%) and Aurora Cannabis (ACB 6.99%). Neither of the Canadian marijuana companies is profitable, and both reported plummeting quarterly revenue in their most recent earnings update.

But that doesn't mean the two stocks are equal, and I see one of the two as the clear winner of the matchup. I even see one of them eventually becoming an excellent investment once a few key things improve. Let's investigate why. 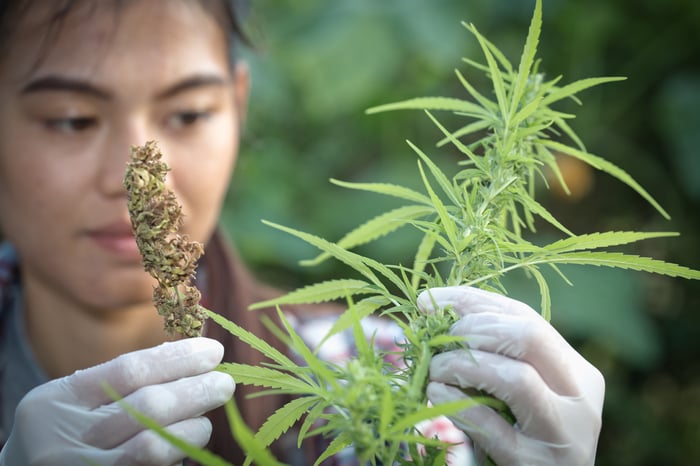 The first thing that investors should realize about these two businesses is that they both are having trouble making enough money to pay the bills by selling cannabis alone.

Aurora's financial strength is especially poor. It has nearly 400 million Canadian dollars ($323.3 million) in debt, and only CA$425 million in cash and equivalents. In the past 12 months, it had an outflow of CA$263.66 million in cash, which was partially a result of paying off $122.92 million in long-term debt.

Given that its trailing operating expenses were CA$225 million, the company's reserves will be running quite low if it chooses to make a similarly large debt payment over the next year. And, unless its fortunes dramatically turn around in the next 24 months, it'll be in danger of not having enough money to pay for its ongoing operations.

What's more, Aurora has been struggling to become profitable for years, and its situation still hasn't improved. While management has touted that scaling back its operations as part of its transformation plan will result in as much as CA$80 million in annual cost savings, that might not be enough if it comes at the expense of left-behind revenue. Likewise, while leadership has emphasized that new stores are opening and demand for adult recreational products is due to pick up once again, it's hard to see how adding new locations will solve the problem of continued unprofitability.

Something's got to give, whether it's shrinking revenue, high costs, or the tight cash situation. In other words, shareholders should probably be paranoid about getting their equity diluted by a new stock offering, as it may end up being the only way out of the current conundrum.

Sundial is the better option

In contrast to Aurora Cannabis, Sundial Growers has a strong financial position. It has CA$743 million in unrestricted cash, a scant CA$48.8 million in trailing operating expenses, and zero debt, though it did report a loss of CA$140.29 million in the past 12 months.

Aside from its much larger runway, Sundial is also a company that's building out new business units and making transformative acquisitions to enter new markets. Since the 2020 restructuring, its fresh SunStream Bancorp division has been shopping around for lucrative cannabis operations to acquire or invest in, and for the first six months of 2021, investment income was a larger portion of Sundial's total revenue than sales of cannabis.

And it may soon be diversifying its business by getting into the Canadian market for liquor. With the proposed acquisition of Alcanna, Canada's largest private liquor retailer, for CA$346 million in stock, Sundial will also gain a controlling stake in Nova Cannabis. In theory, that stake will mean that it will own more retail locations than any other cannabis operator in Canada. Needless to say, Aurora Cannabis has no such opportunity in the works.

Investors should probably tread carefully even though Sundial is the better marijuana stock. The company's investments may give it a new life, but it still hasn't proven that it can profitably sell any single product for an appreciable amount of time. And, even though it has plenty of cash in the bank, simply surviving isn't enough to consistently incentivize people to buy the stock. For that, it'll need to grow its top line, not to mention its prospects for expanding outside Canada.