Demand is weak, and the company's explanation doesn't cover all possible reasons why.

Opinions vary on whether plant-based meat substitutes are a blessing or a curse. Some will point to perceived health and environmental benefits. Others will balk at the laundry list of ingredients necessary to make processed fake meat look and taste like real meat.

One thing is for certain: Consumers aren't buying it. Fake-meat pioneer Beyond Meat (BYND 2.85%) originally expected to generate somewhere between $120 million and $140 million in revenue for the third quarter. With the third quarter now in the books, the company fell short of that goal.

Beyond Meat slashed its revenue outlook to just $106 million last week, prompting the stock to tumble on Friday. If that number is what the company ultimately reports when it discloses its full results on Nov. 10, revenue will be down nearly 30% from the second quarter. 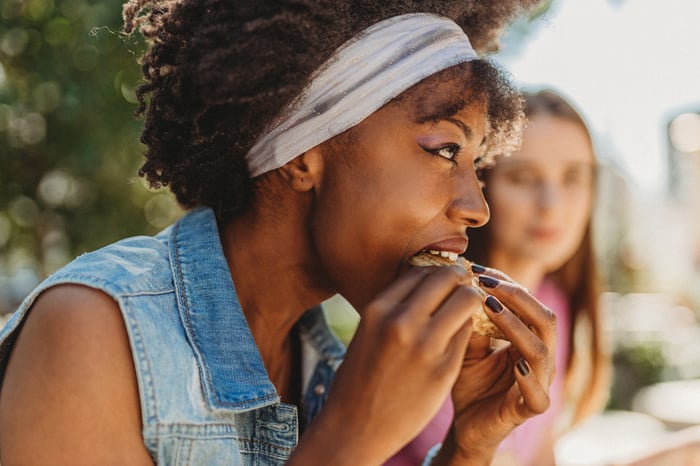 What was behind the sales decline?

How was Beyond Meat so wrong about its sales? The company cited many factors that affected sales, but the common denominator was that restaurants, grocery stores, and consumers simply bought less than Beyond Meat was expecting.

The broadest reason the company offered was "the effects of the COVID-19 Delta variant." That doesn't make a ton of sense. During the worst of the pandemic last year, increased sales to retail outlets more than made up for slumping sales to the foodservice industry. Beyond Meat grew its sales by 37% in 2020 despite all the restrictions placed on restaurants.

With the delta variant, restrictions were largely gone. Monthly spending at restaurants and eating places in the U.S. has been higher in the past few months than it's ever been, according to data from the U.S. Census Bureau, far surpassing pre-pandemic levels. Spending at grocery stores has also remained strong overall. Despite the delta variant, consumers are spending where Beyond Meat's products are sold.

Beyond Meat laid out some more specific factors that led to its sales shortfall, but they don't quite add up. The company pointed to a prolonged decrease in retail orders from a Canadian distributor, saying that it coincided with the reopening of restaurants. In the same paragraph, the company points to weak sales at some U.S. foodservice customers as a result of the delta variant.

Beyond Meat also blamed delays in distribution expansion and shelf resets on labor shortages. There are certainly labor shortages, and perhaps those are partly to blame. But another explanation is that grocery stores are seeing weak demand for Beyond Meat's products and choosing to pull back on how many stores sell them and how much they stock.

That weak demand could be due to an exploding number of fake-meat competitors taking up the shelf space that Beyond Meat expected to win. The company may have overestimated the appeal of its brand in a sea of similar products.

The stock is still priced for perfection

Beyond Meat stock has crashed since peaking early this year, down about 50%. Even after this decline, the valuation is tough to justify.

Beyond Meat is currently valued just below $6 billion. Revenue through the first nine months of 2021, assuming the company hits its new third-quarter guidance, will be roughly $360 million. Depending on how the fourth quarter goes, full-year revenue will be somewhere in the vicinity of $500 million if we're being generous. That puts the price-to-sales ratio well over 10.

Beyond Meat is attempting to compete with a product that is largely a commodity and for which pricing is dictated by supply and demand. On top of that, it faces an unending stream of competitors aiming to do the same thing. That's not a recipe for meaty profits.

Beyond Meat couldn't turn a profit in 2020 even as sales to grocery stores soared, and it's lost $46 million through the first six months of this year. The sales shortfall in the third quarter is probably going to be a disaster for the bottom line. With sales tumbling and red ink splattered all over the income statement, investors may want to think twice before investing in Beyond Meat.

Short Interest for Beyond Meat Remains High. Is There Hope Left for the Stock?
415%