Coca-Cola won't make anyone rich overnight, but it remains a solid dividend stock for long-term investors.

Warren Buffett's Berkshire Hathaway (BRK.A -0.47%) (BRK.B -0.43%) has owned a large stake in The Coca-Cola Company (KO -1.06%) since 1988. His overall $1.3 billion investment in the beverage giant has grown in value to be worth roughly $22 billion today. It is probably one of Buffett's most famous holdings, and he's often pictured enjoying a Coke.

But is it a good investment today? Let's take a closer look. While the company is likely too mature to make new investors rich overnight, it still can be a solid dividend holding for long-term investors. Here are four reasons why.

1. The company is a cash flow machine

Coca-Cola is the largest non-alcoholic beverage company globally, with approximately 200 brands, spanning soda, water, juices, coffees, teas, and more. These products don't cost a lot to produce, and Coca-Cola franchised its bottling operations during the 2010s, outsourcing the most costly aspect of its business -- making the beverages. 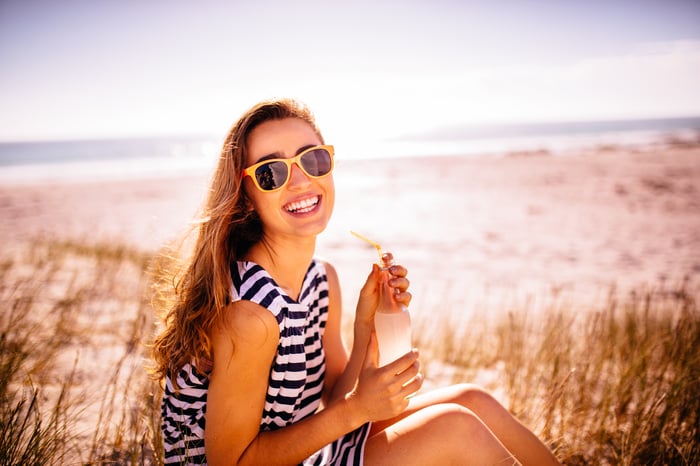 The company today still makes drink syrups and concentrates, but in a sense, it's more of a branding company. Its financials reflect this -- the company generated $11.5 billion in free cash flow on $36.4 billion in revenue over the trailing 12 months, leaving it a lot of cash to make acquisitions, pay dividends, and shore up its balance sheet.

2. The dividend is legendary

One of Coca-Cola's best traits from an investor standpoint is its outstanding dividend history. The company has increased its payouts annually for the past 59 straight years -- one of the longest streaks of any public company and qualifies it for Dividend King status. At the current share price, its yield is 3%, which is a solid return considering that the S&P 500's average yield now is around 1.3%.

The dividend payout ratio is currently 77%, so most of the company's cash flow is going out the door to shareholders. In some cases, a high payout ratio might be a concern because it leaves little cash for the business. But Coca-Cola doesn't need much capital to operate, so it can handle this better than most.

3. Simple levers to pull for growth

All the company requires to continue raising its dividend regularly is modest revenue growth. Coca-Cola has a couple of straightforward ways to achieve this goal.

For instance, its products come in various sizes of bottles, cans, and serving sizes. A few years ago, it started selling mini-cans, priced on a unit basis slightly cheaper than its regular cans. But the price per ounce of soda is higher, so the mini-cans are more profitable.

Another route Coca-Cola has taken is to acquire and grow new brands -- and as a giant in the beverage world, it can demand premium shelf space for those new products at millions of distribution points worldwide. Products owned by smaller competitors are unlikely to get the favorable treatment that Coca-Cola's drinks can command.

Coca-Cola sacrificed some revenue when it exited its bottling operations, so investors looking at its revenue chart over the past decade will see declines. However, I expect this metric to turn upward again. Management is guiding for revenue growth in the 12% to 14% range for 2021.

Coca-Cola is a household name, and the stock is popular with retail investors, so it rarely slips to a cheap valuation. Over the past decade, the shares have traded at an average price-to-earnings ratio of almost 26.

Analysts are calling for Coca-Cola's earnings per share to be around $2.26 in 2021, giving the stock a price-to-earnings ratio of 24 -- a slight discount to its historical average. I don't think a discounted valuation is warranted as analysts project the company's earnings will grow an average of 8% to 9% annually over the next three to five years. So investors could conceivably see double-digit total returns when factoring in the dividend's 3% yield.

Consumers keep buying Coca-Cola's beverages in virtually all economic scenarios, making its business resilient. It's this degree of safety that makes the company a quality holding. And the possibility of double-digit percentage returns makes it a logical holding for conservative long-term portfolios.