Micron Technology (NASDAQ:MU) and Skyworks Solutions (NASDAQ:SWKS) are two of the world's leading semiconductor companies. The sector has taken a hit recently due to talk of a Fed taper and supply chain disruptions .

Both stocks have taken notable dips recently, with Micron roughly 40% and Skyworks approximately 20% off 52-week highs. Long-term semiconductor investors will tell you that drops in these stocks have historically been goldmines -- but which one is the better pick here? 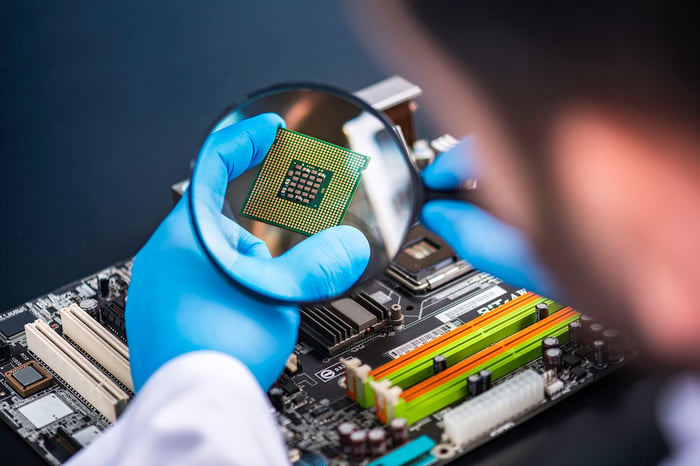 A look at Micron

Micron has been struggling with the semiconductor shortage, and according to the most recent earnings call, it has hurt the revenue outlook until the second half of 2022. Specifically, it is facing notable challenges in its computer segment. The shortage has impacted its customers' production targets and has affected revenue, but the company expects this to be resolved over the next few quarters as supply chain constraints in that segment lesson.

Micron faces longer-term constraints in the auto and industrial segments. Both segments use similar components, and while there have been long-term tailwinds due to the increasing complexity in automobiles and devices, the company has not been able to fully capitalize on the secular trend due to component constraints from suppliers and internal capacity constraints. This has been one of the worst-hit categories for semiconductor companies -- and perhaps the most frustrating. The company predicts that the supply chain challenges will persist over the short term, and the company's inventory is already below target levels. However, there is light at the end of the tunnel.

The company has maintained strong gross margins, which validates the theory that the company is still facing strong demand. It also views the shortages as transitory, which jives well with the lack of aggressive capital expenditure investment in long-term solutions outside of planned expansions. Micron's leadership team is being extremely disciplined here, and they have done an exceptional job at being transparent with their investors.

Micron has been doing a great job at identifying and incorporating high-margin business segments, which have added significant value to investors.

The company expects the revenue mix to shift to the higher-margin NAND technology, with the expected compound annual growth rate (CAGR) for the technology to be 30% versus 20% for DRAM. The lower-cost DRAM tech accounted for almost 70% of revenue in FY20. Growth in the tech has been stronger than Micron's expectations, and the company is working on scaling higher-end products in both technology segments.

A look at Skyworks

Skyworks is a semiconductor manufacturer that happens to build the chips for 5G infrastructure and devices. The company is in a great moment right now, and it looks set to benefit from 5G tailwinds for some time to come. 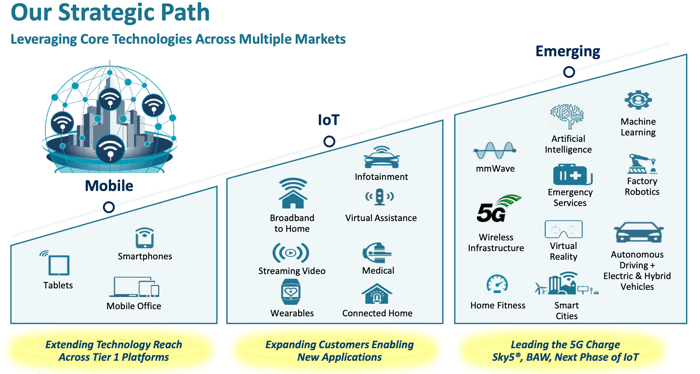 Widespread 5G implementation is in the early innings, and as more devices adopt the technology, Skyworks looks set to benefit. One of the major criticisms that have been leveled at Skyworks in recent times has been its reliance on Apple. Apple is currently Skyworks' most prominent source of revenue, and it has been for quite some time. In 2020 and 2019, the relationship with Apple alone accounted for more than 50% of net revenue, which adds a layer of risk to the opportunity. Apple also recently slashed production targets due to the global chip shortage, which negatively impacted evaluations of Apple suppliers, Skyworks included.

The move provided Skyworks shareholders with an unwelcome warning of what life could be like if its business relationship with Apple was ever threatened. Nevertheless, Skyworks is a stunning company with a relatively attractive valuation for a tech stock. The leadership is increasing the company's consumer base and the team is focused on capitalizing on the potentially lucrative wireless opportunity. I would argue that Skyworks' market is still developing and it will provide a great deal of upside for the investors who are willing to hold long term.

Skyworks also has a forward PE ratio of 15.85 at today's price of roughly $165, which is a steal for a semiconductor company. The company's revenue understandably dipped as a result of the pandemic and continued supply chain disruptions would likely provide headwinds for its customers. Still, all signs point to improvements in the current fiscal year as the economy gets back on track, despite the semiconductor shortage.

So which stock should you buy? Probably both, but Micron is the better opportunity here. The stock has been unduly punished because of supply chain challenges, and we can see a path forward for the company. Skyworks is probably the better company right now, but shareholders are getting an excellent starting point with Micron due to this recent sell-off and that cannot be ignored.