The growth in cloud computing suggests it might be one of the best technologies to bet on over the long term.

Navigating through the modern age of technology can be challenging for investors. It's fast paced, and it's hard to determine what will have staying power over the long term.

But cloud computing is an example of an innovative technology with immeasurable benefits, as it allows companies to deliver complex products and services online, expanding their access to the world.

The cloud computing industry was worth $219 billion in 2020, and its compound annual growth rate (CAGR) of 17.9% sets up a $1 trillion market size by the end of this decade. The following two companies are masterfully leveraging its benefits to drive the present, and future, of technology. 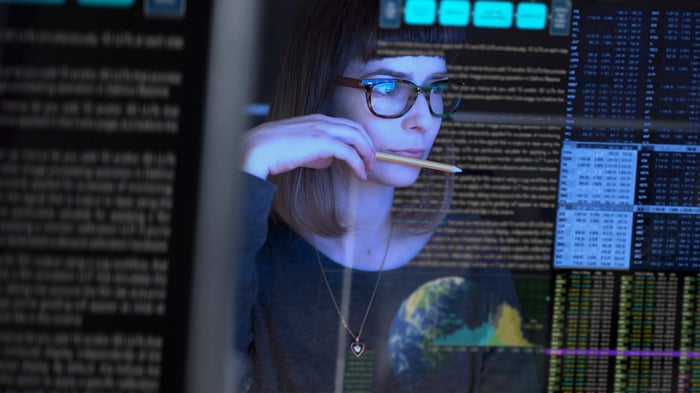 The case for Splunk

Splunk (SPLK -0.73%) describes itself as the "Data-to-Everything" platform, and that's more than just clever marketing. Currently, 92 of the Fortune 100 companies use its products and services, highlighting the diverse array of industries it operates in.

As the economy continues its shift into the digital realm, companies are generating an enormous amount of data and they're only just beginning to discover its value. Splunk's specialty is ingesting mountains of this data and delivering insights to the end user in a readable way, to help them unlock hidden potential within their business.

But with the introduction of new technologies like artificial intelligence (AI), Splunk's platform also has predictive abilities that can help manufacturers (for example) identify possible equipment failures, and address them before they even happen. AI and machine learning are core to Splunk's future, because they can analyze high volumes of complex data that simply wouldn't be possible with human input alone.

The cloud has been a game changer. It allows the company to deliver all of its prized products and services in a more accessible way, opening the door to new opportunities. It's even driving new business segments, as Splunk now helps companies migrate their operations to the cloud with cybersecurity offerings, among other things.

The difference in growth between Splunk's overall business and its cloud-related businesses is eye opening.

The cloud represented 9.5% of Splunk's total revenue in fiscal 2019, which ballooned to almost 25% in fiscal 2021, which just ended. Investors should be encouraged by the company's increasing commitment to the fastest growing segment of its business, and over the next few years, cloud should make a significant impact on its overall growth rate.

If Splunk continues on its current trajectory it could grow into a cloud-based giant by the end of this decade, and take a healthy slice of the $1 trillion market that's up for grabs. Microsoft (MSFT -0.61%) is the epitome of household names. Its behemoth consumer business is responsible for powering billions of computers and devices around the globe through its Windows operating system. Though it's best known for its software offerings, the company has grown into a more diverse enterprise with forays into gaming and even hardware.

But it might come as a surprise that of Microsoft's three main business segments, its largest is cloud computing. It accounted for over $60 billion in revenue during fiscal 2021, making up 35% of the company's total. The Microsoft Azure platform is focused on serving businesses, and is currently used by 95% of Fortune 500 companies. It offers cloud infrastructure, artificial intelligence, data analytics, and security -- but the list continues to grow as cloud technology evolves.

Like Splunk, Microsoft's cloud segment is outpacing its overall growth. It further highlights corporate appetites for cloud-based services, which will drive growth into the future.

For investors, using Microsoft's stock to gain exposure to cloud computing comes with a plethora of other benefits. Attached is a software business that's entrenched within the lives of businesses and consumers alike with products such as Office 365. Not to mention its Xbox console gaming platform and Surface line of tablets and notebooks, which are multi-billion dollar businesses in their own right.

Suffice to say, Microsoft might be one of the strongest ways to play the cloud between now and the end of the decade. With its 24% growth rate in the segment, it's set to capture over $100 billion in cloud revenue per year by then.