Shares of the home services provider dipped after it reported third-quarter earnings. 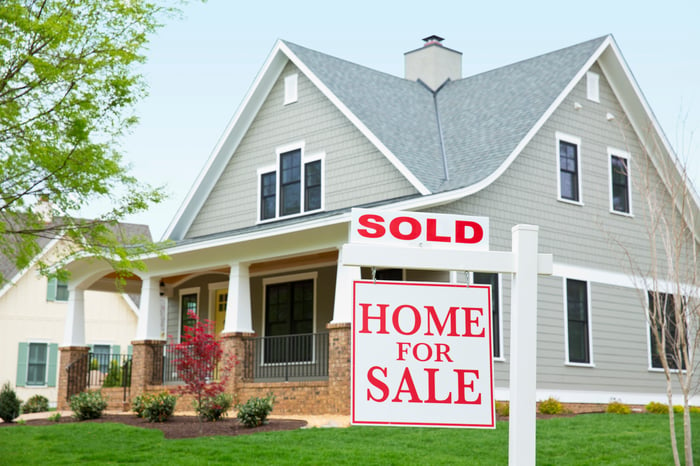 Revenue ticked up 7% to $471 million, which was short of the consensus at $476.5 million. The company noted a challenging environment in the real estate channel, which is made up of sales of its repair plans through real estate agents when homes are sold. In a tight real estate market, it's harder for the company to sell those insurance plans.

Sales in the real estate channel declined by 5% but were offset by steady growth in renewals, which make up the vast majority of its revenue, and direct-to-consumer, its other channel for customer acquisition.

On the cost side, the company gained leverage across the board as gross margin increased 500 basis points to 54% due to a lower number of service requests and process improvements. And adjusted earnings before interest, taxes, amortization, and depreciation (EBITDA) jumped 34% to $122 million as the company controlled selling and administrative costs and cut its interest expense. Adjusted earnings per share jumped 55% to $0.91, which was ahead of analyst estimates at $0.68.

CEO Rex Tibbens said: "Our vision of redefining home services and becoming a leader in residential repair and maintenance solutions remains as strong as ever. While key initiatives drove improved profitability this quarter, we remain committed to delivering stronger revenue growth in the future."

Frontdoor also lowered its revenue guidance for the year from a range of $1.6 billion to $1.62 billion, to $1.59 billion to $1.6 billion, reflecting the weak third-quarter revenue growth and challenges in the real estate channel. However, the company lifted its adjusted EBITDA guidance to $310 million to $315 million.

Still, that wasn't enough to satisfy investors as a sustained decline in real estate sales could eventually weigh on renewals.

3 Things Investors Should Know About This ServiceMaster Spinoff