Meme cryptocurrency coin Shiba Inu (SHIB 1.23%) had a pretty nice week for investors, with a gain of over 150% as of Friday morning after hitting a new all-time high on Wednesday. That may sound pretty outrageous to see more than a double in a week, but it pales in comparison to how that token has done over the past year. In fact, there is no comparison. Based on a year-ago price of $0.000000000079 per coin, Shiba Inu is up more than 80,000,000% over the past year. This week's run has also pulled Dogecoin (DOGE 1.53%) along for the ride, with a weekly gain of almost 15%. For good measure, Bitcoin mining and energy technology company CleanSpark (CLSK 0.35%) is also up about 20% so far for the week.

Shiba Inu's market cap is now about $38 billion, according to CoinMarketCap, moving it into the top 10 most valuable cryptocurrency tokens globally, and ahead of Dogecoin. It has become an Ethereum (ETH 0.24%)-based alternative to Dogecoin, a new favorite among the retail traders on social media, and effectively the new meme coin of choice. 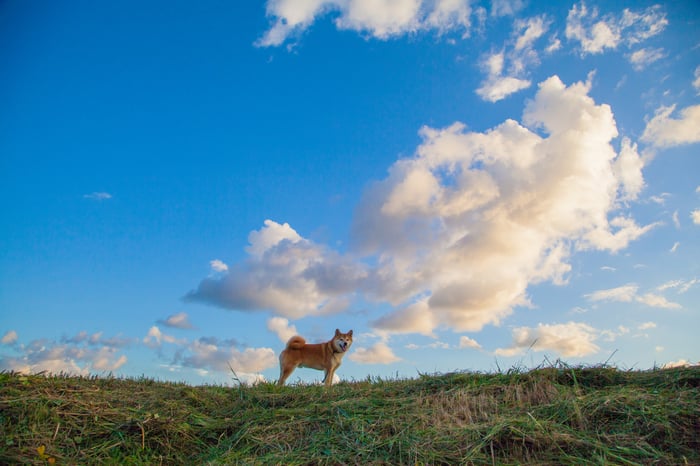 Whether Shiba Inu has a use case scenario is under debate. ShibaSwap is the decentralized exchange that hosts the SHIB token. Strong underlying support from the community of Shiba Inu followers may bring it beyond simply a meme coin attraction. Shiba Inu recently released a series of non-fungible tokens (NFTs) called "shiboshis" that are written on the Ethereum blockchain.

But this week's run was likely due more specifically to an online petition that is asking for broker Robinhood Markets to make Shiba Inu available to trade. The petition from Change.org reportedly has more than 400,000 signatures. The request suggests that "Dogecoin has been a huge success for Robinhood, and its investors." For its part, Robinhood released its quarterly financial report this week, but did not mention Shiba Inu in its conference call with investors.

Altcoins like Dogecoin and Shiba Inu may be getting much of the publicity recently, but that doesn't mean Bitcoin has gone the way of the dinosaur. Investors drove CleanSpark higher this week as the company announced earlier this month that it used Bitcoin to purchase 4,500 new generation Bitcoin mining machines. Delivery of the machines is scheduled to begin in November and be completed by July 2022, the company said. It's a significant boost in mining capacity for CleanSpark, representing about a 45% increase over current capacity.

Between traditional cryptocurrencies, altcoins with meme status, and continued mining of Bitcoin, there will likely remain much investor interest in the sector, as has been seen this week with several of the players.