The market likes the direction the motorcycle maker is heading.

Harley-Davidson (HOG 1.50%) got a warm welcome from the market after reporting third-quarter financial results that roared past analyst expectations, but clouds remain on the horizon.

Topping the year-ago quarter's performance was an achievement because last year was such a strong one after dealerships reopened following the pandemic lockdowns. Yet sales remain below 2019 and supply chain issues are a problem that could snarl the motorcycle market. 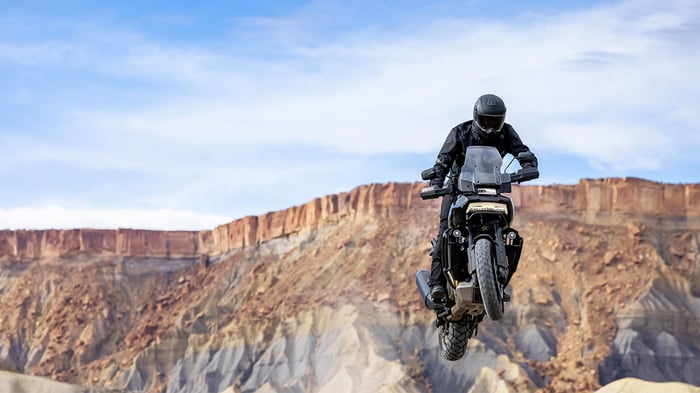 Harley reported a 29% increase in motorcycle revenue for the period, hitting $889 million, while total revenue was up 17% to $1.36 billion, beating analyst expectations of $1.14 billion. Adjusted earnings of $1.18 per share easily trounced the consensus estimates of $0.77 per share.

The motorcycle maker credited selling more motorcycles and more profitable models for the better performance. It underscores Harley's "Hardwire" strategic plan, which was implemented by CEO Jochen Zeitz to narrowly focus the company's efforts on its most profitable bikes in its best markets.

It's why shipments to Europe fell 16% in the quarter, were down 41% in Latin America, and tumbled 15% in Asia. However, in Harley's primary market, the U.S., deliveries were 10% higher despite supply chain constraints.

The attention to making profitable sales was evident in the Grand American Touring segment (rebranded from the more simply named "touring" segment), with shipments almost 27% higher and retail sales up 5% year over year.

These are Harley-Davidson's biggest, most expensive motorcycles -- the CVO models (which start at over $40,000), the Electra Glide, Street Glide, and Road Glide -- and they're selling well.

So, too, is the Pan America, Harley's entry into the adventure touring market. Zeitz told analysts the bike was the top-selling motorcycle in the space, and since being launched earlier this year, has already captured a 16% share of the market.

There had been a lot of questions about whether Harley-Davidson would be able to break into the adventure touring market, as it is a crowded space dominated by BMW (BMWYY 3.55%) and KTM. Those concerns seem to have been unfounded and it opens Harley up to a whole new class of riders.

It certainly has much greater potential for the bike maker than do electric motorcycles, which garnered virtually no mention in the earnings conference call.

Yet as positive as this is, much of the growth was the result of product mix -- those higher-priced bikes -- as well as higher pricing itself. Harley also hiked the surcharge it imposed on U.S. bikes to cover higher raw materials costs, raising it from 2% to 3.5%, while also extending it to international markets.

Although it shows that Harley can still sell bikes at a premium, high prices were part of the reason the luxury motorcycle brand was in a multi-year tailspin. This bump might just be a short-term response to the pandemic. The number of motorcycles sold in the U.S. was only 1.3% higher than last year, but still 9% below 2019.

Yet the supply chain issue will be a problem going forward and Harley expects it to last until at least next year, with congestion at ports increasing shipping times and negatively impacting production and product availability. The sales strength exhibited this quarter might not last.

Harley-Davidson is certainly a better company today than it was before the pandemic as it is much more focused on profitable sales. But beating Wall Street estimates might not be as grand as it seems, and both inflation and supply chain disruptions may make it a short-lived celebration.