The pandemic isn't over, but it's starting to feel like it.

Shares of Carnival Corporation (CCL -2.30%) jumped in early trading Monday on a pair of positive news items. As CruiseIndustryNews.com reported on Sunday, "cruise ship occupancies [are] on the rise at Carnival," with the new Carnival Mardi Gras, for example, boasting 85% occupancy on its cruises 'round the Caribbean.

Shares of the cruise line operator's stock are up 2.6% through 11:30 a.m. EDT Monday in response. 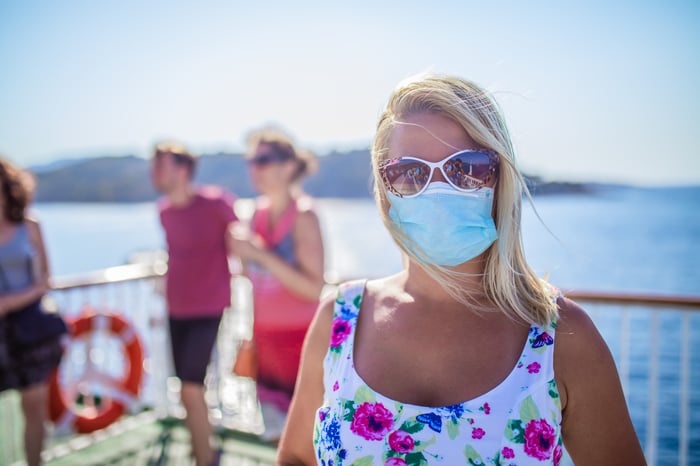 The Mardi Gras isn't the only Carnival ship sailing with nearly a full boat, either. "Carnival Cruise Line [is] said to have been increasing occupancies as ships get back into service, crew gets accustomed to new protocols and demand continues to rise for cruise vacations," reports CIN, and the company is on track to have 15 ships from this brand back in service -- with 50,000 berths aboard -- by the end of this month.

And maybe that shouldn't be surprising.

Although the coronavirus pandemic is far from over (as recently as Wednesday, Johns Hopkins University reported nearly 100,000 new cases of COVID-19 in the U.S.), The Washington Post declared Sunday that the pandemic "appears to be winding down," and infection numbers in October were "less than half the number in August." As coronavirus transitions from a pandemic to an endemic illness, "it doesn't end. We just stop caring. Or we care a lot less," commented Johns Hopkins epidemiologist Jennifer Nuzzo. And that seems to be how things are playing out.

"The United States will soon reopen land borders to vaccinated visitors," reports the Post, "and lift several international travel restrictions." Airline travel is "not too far from pre-pandemic travel levels."

It makes sense, then, that the return of travel would bring with it a return in cruise ship traffic at companies like Carnival and its peers. As the Post opines: "the United States has entered a new phase of the pandemic in which people are adapting to the persistent presence of an endemic but usually nonlethal pathogen. They really have no choice. The virus isn't going away."

That being said, before you jump back into cruise stocks, consider a couple of other things that aren't going away. Carnival's debt is one. Before the pandemic hit, Carnival was sailing high with less than $10 billion in long-term debt on its books, according to historical data from S&P Global Market Intelligence. Two years later, Carnival's wallowing along under a $26.8 billion debt load.

Higher costs are another. Carnival now has an entire web page devoted to describing its policies on face masks, social distancing, and other pandemic-spawned restrictions, the enforcement of which will naturally raise the company's operating costs. It remains to be seen how profitable Carnival can be under the new regime even with "increasing occupancies" for its ships, but I'd bet good money the company will be less profitable post-pandemic than it was before.