A major investor in Just Eat is calling for it to spin off Grubhub as the company struggles with profitability.

Shares of multinational food delivery business Just Eat Takeaway (JTKWY -1.77%) have continued to slide in the days since the company delivered a lackluster forecast in its Oct. 21 investor presentation. Now a big investor in the Netherlands-based company is openly urging it to divest itself of Grubhub -- but Just Eat refuses to cut its U.S. subsidiary loose.

Is the delivery company making the right choice to keep Grubhub? There are strong arguments on both sides, but keeping the subsidiary may be the best strategy.

A week ago, investors responded negatively to management's Capital Markets Day presentation. Just Eat didn't boost its 2021 guidance and said it expected its earnings before interest, taxes, depreciation, and amortization (EBITDA) margins to shrink by 1% to 1.5% for the year. On the plus side, management said order growth should reach 45% year over year -- not counting Grubhub, which it acquired in June 2020 for $7.3 billion in stock, and fully integrated into its operations in June 2021. Management also asserted that this will be the company's "peak year of losses" and guided for a stronger 2022 performance.

With its numerous acquisitions and subsidiaries giving it something of a "Frankenstein" business model, Just Eat's operations in different countries yield varied results. According to the first-half 2021 earnings report it provided on Aug. 17, its revenue rose 52% year over year to approximately $3 billion. Its overall adjusted EBITDA, however, fell by 192% to a loss of approximately $220 million. 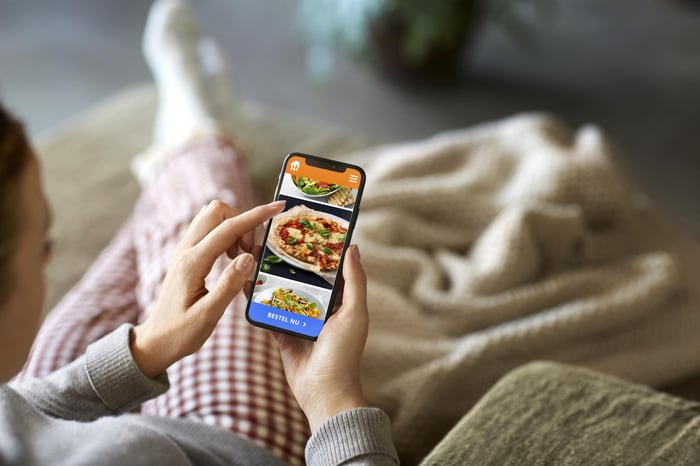 Just Eat did post double-digit percentage revenue gains for all its major markets. The United Kingdom and Germany performed the best with increases of 82% and 76%, respectively, while the United States (that is, Grubhub) performed the worst with a gain of 22%. Adjusted EBITDA was down by 183% in the U.S., but also fell in other markets, with the U.K. registering a 156% plunge and Canada's EBITDA falling by 85%. Only Germany and the Netherlands produced positive earnings.

Would dropping Grubhub like a hot potato be bullish?

Cat Rock Capital Management, which owns a 6.5% stake in Just Eat, sent a letter to it on Monday to say that it was "deeply disappointed by the lack of tangible progress on asset sales or a formal commitment to near-term strategic action to unlock Grubhub's value." The activist investor also says that, based on Just Eat's 2022 guidance, the delivery company is trading at a very low value -- approximately 8 times its expected EBITDA. Cat Rock claims this will make it harder for Just Eat to get financing and also leaves it more vulnerable to takeover bids.

Cat Rock then asserts that Just Eat's "persistent equity underperformance over the past two years has a clear culprit -- the decision to acquire Grubhub in June 2020."

The letter notes that Just Eat's returns rose by 48% between its 2016 IPO and 2020. After acquiring Grubhub, its share value dropped 18% immediately, and its "stock has underperformed the MSCI World Index by 69%" in the 16 months that followed.

The activist investor admits Grubhub is actually performing well, saying "we believe that the market is undoubtedly wrong when it attributes a large negative value to Grubhub," and that "Grubhub has significant strategic value." However, it argues investors believe Grubhub is an albatross around Just Eat Takeaway's neck, and are bidding the company's stock down based on a mistaken, but strongly and widely held, belief.

Just Eat, it says, "must unlock the value of Grubhub through a sale or spin-off of the business this year." It further asserts that doing so "could immediately drive a >100% rerating of [Just Eat Takeaway] stock." Cat Rock suggests Amazon, privately held online grocery delivery company Instacart, or Walmart as potential buyers.

Just Eat Takeaway responded to this missive with a press release that signaled its refusal to sell Grubhub at this point.  "[W]hile Grubhub has some specific challenges today, it is a large and growing business with good underlying profitability," it said, adding that it is working on a "clear improvement plan" for its subsidiary.

Which one is right: Cat Rock or Just Eat?

While Just Eat's shares did drop sharply after the June 2020 announcement of its Grubhub purchase, the stock charts don't appear to correlate as strongly to the event as Cat Rock claims. Share prices reached new highs in August and October 2020, then began a slow decline around the start of 2021. The actual merger with Grubhub in June 2021 was followed by a stock price rise in August and September.

At this point, Grubhub is generating revenue, orders, and expansion in a major market. While its EBITDA is negative, that's true of Just Eat Takeaway's U.K. operations too, and that business unit is nevertheless viewed as being a net positive for the company.

In a 1974 Forbes interview, Warren Buffett (possibly quoting economist Ben Graham), said about the market, "In the short run, it's a voting machine, in the long run, it's a weighing machine." Right now, Cat Rock may be correct that investors are "voting" Just Eat's shares down irrationally in the belief Grubhub is a drag on the company. But if Grubhub is actually a valuable asset -- and several performance metrics suggest it is -- the market will weigh the situation rationally in the longer run and Just Eat's stock will rise to price in Grubhub's true value.

While considerable risks remain in its highly competitive industry, Just Eat still looks like a promising enterprise among food delivery stocks due to its strong revenue and order growth. Its current slumping stock price may be a good opportunity to buy, provided you're willing to accept the risk inherent to all the stocks in this space.

Will Either of These Delivery Stocks Turn Profitable Anytime Soon?
414%