The company anticipates economic conditions working in its favor in the coming year.

One expectation that stood out was Starbucks' plan to nearly double the pace of new store growth in fiscal 2022 -- a surprise announcement considering the myriad supply chain disruptions that are challenging the economy right now. 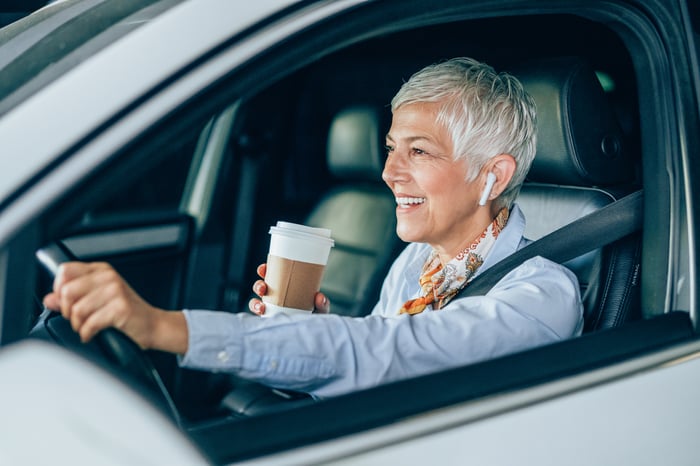 Starbucks is pushing on the accelerator

Interestingly, after revenue fell in fiscal 2020 at the onset of the pandemic, it snapped back for Starbucks in fiscal 2021, increasing by 24% to reach $29.1 billion. The overall sum was the highest in the company's history, an impressive feat while the pandemic drags on and operations are not back to full strength.

Starbucks expects its momentum to continue into fiscal 2022 and is forecasting overall revenue of at least $32.5 billion on the year. On the back of such firm growth expectations, it's understandable that Starbucks wants to invest in adding more locations. While the pandemic is not over, 7 billion doses of COVID-19 vaccine have already been administered. According to Bloomberg, over 75% of the world population will be vaccinated in five months at current rates. That could return the world to a more normalized routine, a scenario that works in Starbucks' favor.

Management is perhaps anticipating the improved economic conditions and investing ahead with its plans to nearly double new store development. Starbucks is planning to open 2,000 stores in 2022, up from the 1,173 it added in 2021. As of this writing, Starbucks has 33,800 stores worldwide, so the additions in 2022 will represent a 6% increase. Not a shabby sum for a business of its size.

Starbucks is willing to invest in growth

As part of its plan to achieve this level of new store growth, Starbucks needs to secure enough staff to fill these locations. It's a task that is increasingly difficult right now while businesses are reporting labor shortages. Employers are finding out that people are not willing to work at prevailing wages when a deadly virus is in circulation. They are demanding higher salaries and more benefits to accept and stay at jobs.

Management has correctly realized this dynamic and announced wage increases for Starbucks employees. Here's CEO Kevin Johnson speaking on the matter during the Q4 conference call:

Effective in January, partners with 2 or more years of service will get up to a 5% raise, and partners with 5 or more years will get up to a 10% raise in keeping with our long-standing history of investing in our partners. And next summer, hourly partners in the U.S. will make an average of nearly $17 an hour, with barista rates ranging from $15 to $23 an hour across the country. In total, the FY '21 and FY '22 investments represent approximately $1 billion in incremental annual wages and benefits.

The investment will be a 400 basis point headwind to Starbucks' operating profit margin in fiscal 2022. And it may be one reason the stock is down 4% in after-hours trading following the Q4 earnings announcement. If nothing else, taking on an ambitious new store development project in the middle of a pandemic raises investor risk.